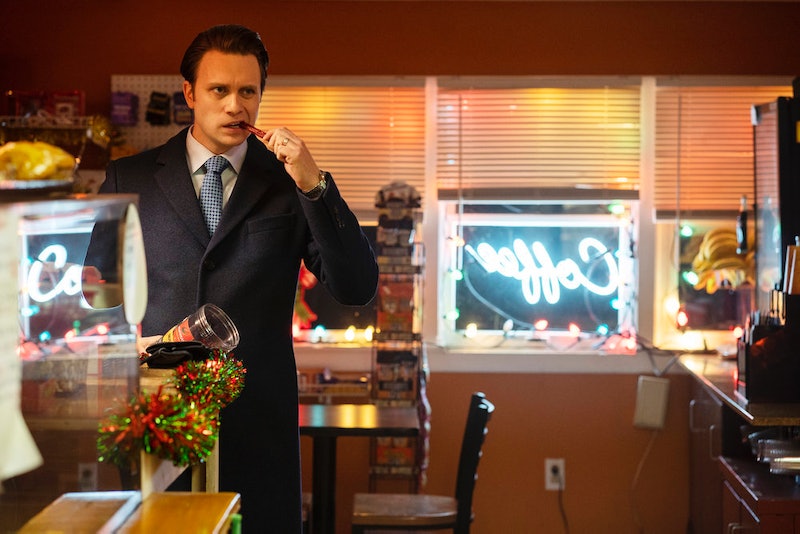 Spoilers ahead for Episode 4 of Mr. Robot Season 4. Tyrell Wellick is dead — or so it seems. After a fight with a Dark Army operative that left him with a bullet wound in his gut, Tyrell stumbled into the forest of Upstate New York to die. However, if Tyrell is really dead, he may have gotten the tamest major character death in the history of Mr. Robot. This is, after all, a show that kickstarted its final season by putting a gun to the head of one of the show's most tragic figures. The reason his death was so tame could be because he's not actually dead — or that his death is just the beginning of a much weirder twist that the show has been teasing for years.

The thinking behind this has largely to do with the Oct. 27 episode's strange cliffhanger ending. After being shot, Tyrell told Elliot he was going "for a walk," only to stumble upon a mysterious blue light. He approached it, staggering, before the screen faded to white. Then, an inverted version of the show's end credits played (black-on-white as opposed to white-on-black). If Tyrell is truly dead, it's clear that something is different about his death than any others on the show so far, and it could play into one of the larger theories surrounding Mr. Robot's endgame.

The series has previously hinted at the idea of time travel and the possibility of parallel universes — Angela spent Season 3 obsessing over the idea that Whiterose could create a world where her mother was still alive — and Tyrell's death may be a clue as to what entering that parallel universe looks like. The biggest hint isn't actually the blue light, but in the show's mirroring of another show that famously used a black-on-white credits sequence to signal an alternate reality.

For five seasons, Lost used a white-on-black final credits image to end each episode — until the Season 5 finale. At the bottom of a well after being sent back in time from 2005 to 1977, Juliet smashed a rock against the core of a hydrogen bomb until it detonated; afterward, the screen went white and cut to an inverted title card. When the show returned in Season 6, not only had some of the main characters been sent to the future, but the show's famous flashback structure transformed into a "flash-sideways" structure, providing glimpses of an alternate reality for each of the main characters. If Mr. Robot is taking after Lost — with which it already shares an interest in inscrutable mysteries and science-fiction — the inverted title could equate to parallel universes and time travel.

That being said, it's certainly possible Tyrell isn't dead and is just having a bizarre, blood loss-induced vision; after all, he was believed to be dead for the entirety of Season 2, only for it to be revealed he was still alive. So it wouldn't be the first time Mr. Robot played a trick like this on viewers. However, this not a show that does anything unintentionally, and the blue light and credit sequence seem to be cuing up a much bigger twist. Let's just hope we get answers sooner than we have so far about "the other one."

More like this
'The Last Of Us' Video Game Revealed Tess’ Fate In The HBO Series
By Brad Witter
Melanie Lynskey Plays A “Ruthless Leader” In 'The Last Of Us'
By Brad Witter
Pedro Pascal Barely Got Through The "Lisa From Temecula" 'SNL' Sketch
By Stephanie Topacio Long
'That '90s Show' Is Officially Coming Back For Season 2
By Gretchen Smail and Grace Wehniainen
Get Even More From Bustle — Sign Up For The Newsletter
From hair trends to relationship advice, our daily newsletter has everything you need to sound like a person who’s on TikTok, even if you aren’t.