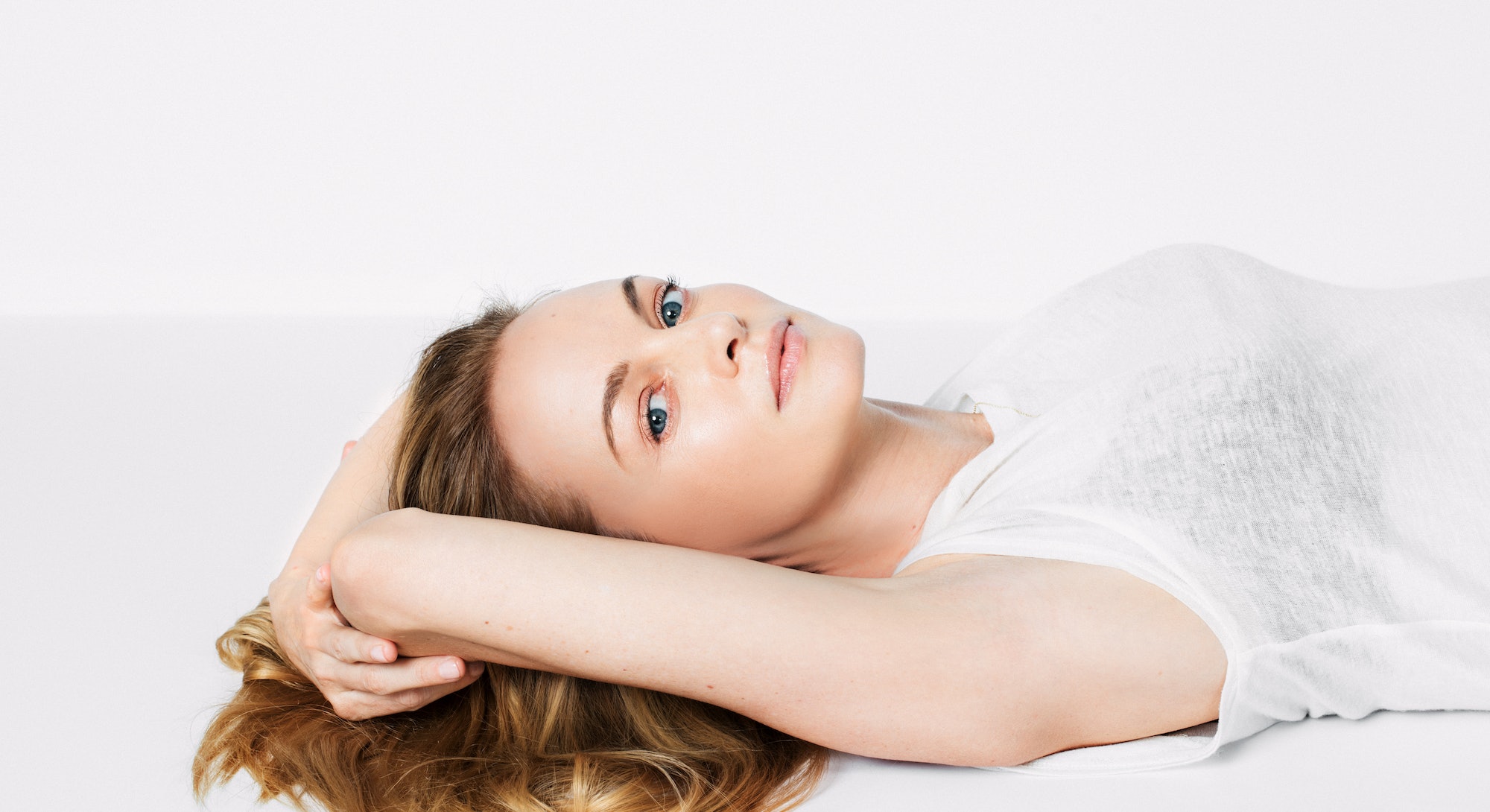 They say you should write what you know. But in Hollywood, that age-old advice apparently needs an addendum: Write what you know — as long as men are into it. And for actor and newly minted director/screenwriter Heather Graham — a woman who swam through the sea of toxic masculinity that is Hollywood and survived to tell the tale — writing what she knew was both the only choice and the reason it took her five years to get her directorial debut off the ground.

"I had gone through a frustrating period of developing projects that I wanted to act in that were female-driven projects. And they weren't getting made," she says when we speak one chilly January afternoon. Her voice is calm; she doesn't even seem frustrated. She's quite simply telling me how it is and how it has always been. And considering that she's spent nearly her entire adult life in this world — she started out with two minor Growing Pains roles back in 1987 — where she says her female screenwriter friends have been told "if you want to get a movie made, write about a man," that near-acceptance makes sense.

Luckily, Graham's solution to this frustrating pattern was not to let it go, but rather to let it out and start writing things down that "upset" her. "I wanted to find the humor in just experiencing sexism in the business and making bad relationship choices, and some of the things I saw my friends doing that I thought they shouldn't be doing, and just finding humor in everything in life that has caused me pain," she says.

She also wanted to depict women "saving themselves" and says she's inspired by female characters who are full, despite their pain or troubles, like most actual women and her recent favorite character, Bridgette Bird from SMILF (creator: Frankie Shaw).

"She's the protagonist [in SMILF] and you're watching the story through her eyes and it's like her saying, 'You know, I've been through all this stuff and I'm still going and I have a great sense of humor and I have a great life and I have all these relationships with these women in my life,'" Graham says. "There are so many movies about, 'Oh, the man needs to save the woman,' but really we save ourselves."

Her own writing, which focused on women saving themselves from their pain, eventually became her screenwriting and directorial debut, Half Magic, out Feb. 23. The comedy follows three newfound friends (played by Graham, The Office alum Angela Kinsey, and Brooklyn Nine-Nine's Stephanie Beatriz) who eventually learn to harness their inner magic to find better love, career success, and sex after they find themselves dealing with a host of, well, not-so-great men. For Kinsey's Eve, that's her ex-husband who dumped her but somehow still manages to keep her affections in his orbit with sporadic love kernels. For Beatriz's Candy, it's her noncommittal man friend who treats her like garbage until it's time to have sex. And for Graham's aspiring screenwriter, Honey — who spends much of her time trying (and failing) to get executives to respect her scripts about female sexuality and women's rights — it's her toxic, misogynistic, downright awful boss and boyfriend, Peter Brock.

Peter is an actor turned big-time entertainment exec who makes money starring in and producing movies where "the sluts die" and who flippantly shoots down Honey's female-driven script ideas by dismissing them as "idiotic." He's particularly fond of the word "slut" in casual office conversation, in descriptions of the expendable female characters in his movies, and in response to Honey during sex, despite her indication that she hates it. And if that's not enough, in one of his most memorable lines, the character actually says, outright, "I'm not saying I'm against women's rights, I'm just saying there's no market for their films." Later, he tells Honey her directing career is stalled because her boobs are too big, and she looks like "a big booby dummy."

It's almost painfully comical how blatantly dismissive and sexist Peter is, but Graham says the character comes from reality — based on "a mixture of a few different people" from her experience in the industry.

"I've totally worked with men like this," Graham says. "They don't have a filter because they're incredibly privileged and they give other people work and people make money off of them, so no one says 'no' to them. So [they're] not super empathetic to other people. They only think about themselves."

And while that realism is what makes the movie so perfect for 2018, it also might just be a big part of why Graham's film took so long to get made. Apparently, not everyone in the movie world was pleased with this depiction of a man who makes movies for a living as a sexual harasser and all-around ass.

"Well, some people said to me [about] Chris D'Elia, the jerk character, that basically, 'Oh, this isn't real,' or, 'Oh, you've got to write in a nice part of his personality. Why is he such a jerk?'" says Graham, who points out that it took most of the more-than-a-century-old entertainment industry until 2017 to realize that men like this are very, very real.

"It was accurate for me. I mean, I felt like I had experienced harassment like that," she says, adding that people who've seen the movie recognize Peter as real, too. "Actually, one journalist who was interviewing me said, 'I've interviewed that guy.'"

Graham also met "that guy" in pitch meetings. Much like D'Elia's toxic character does to all of Honey's female-focused film ideas, Graham says some potential producers initially dismissed Half Magic for the simple fact that it's female-focused.

"'This is a woman's movie, and nobody cares about women's movies' — a lot of people told me that when I was developing stuff. They just said, 'Nobody cares about women's stories,'" she says. Of course, whoever this unnamed potential investor was, they may regret being so dismissive now that the film is coming out in the thick of #MeToo and the anti-sexual harassment and assault revolution.

"Bizarrely, it actually, I think, worked out," Graham says, referring to the initial resistance the film faced from could-be producers and financiers. "For the movie to come out when this is pretty much the biggest story in the news is kind of divine timing. ... If this had come out like three years ago, I don't think that people would be as receptive to the story as they are right now."

And audiences are extremely receptive right now. Not only are poorly behaved Hollywood men an ever-present news story, but women's stories have become a huge part of the industry's recent successes. Some of the biggest hits of 2017 focused on women and female power; the top three films of the year just happen to be a few little women-starring flicks known as Wonder Woman (director: Patty Jenkins), Beauty and the Beast (film editing: Virginia Katz), and Star Wars: The Last Jedi (producer: Kathleen Kennedy). One of the top 2018 Oscar contenders, Lady Bird, is a story focused on a 17-year-old woman and directed by a woman, first-time director and Oscar nominee Greta Gerwig. And one of the most highly anticipated films of 2018 is A Wrinkle In Time, based on the book by Madeleine L'Engle, directed by Ava DuVernay, and starring a group of women so powerful they break the internet almost every day. It would stand to reason that the tide is officially shifting toward women's stories being respected and seen as equally relevant and gripping for audiences as men's stories are.

And while this explosion of feminine energy in Hollywood hasn't always been the reality, that one-time truth that men ruled the industry did do one kind thing: It provided Graham the inspiration to tell a story in which three women confront these patriarchal, masculine forces head on, in a sex-positive romp through self-empowerment — with her own words and vision. And with its February release — in select theaters, VOD, and Digital HD — landing just months into the #MeToo and #TimesUp movements and smack dab in the middle of this girl power-infused 2018 Awards Season, Half Magic's little "women's story" actually couldn't be more relevant if it tried.