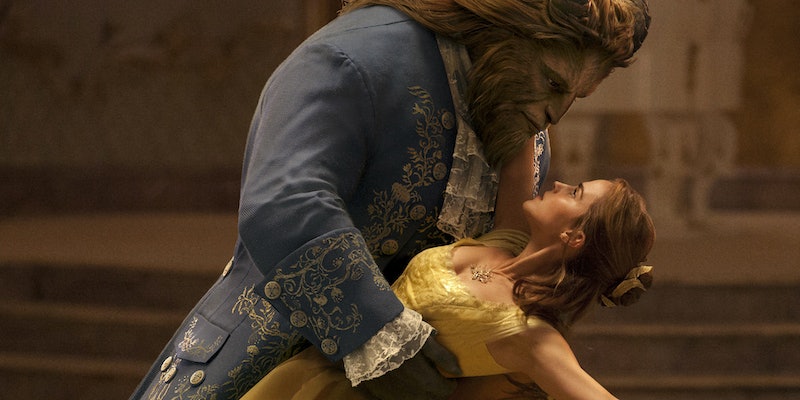 The first onscreen kiss I ever saw was when Ariel and Prince Eric finally embraced in The Little Mermaid, right before her human legs turned back into a single green fin. Her long red hair was cascading down her shoulders, and as they kissed, their faces seemed to morph into one another, on account of their identical complexions. I'm pretty sure there was a part of my youthful brain that was grossed out by the sight of it, but the image became etched in my mind for many years to come.

Since I was raised on all things Disney, the next few onscreen kisses I witnessed were similar. When Jasmine and Aladdin smooched after their flirtatious magic carpet ride, I noticed that they had matching skin tones and hair colors. Sleeping Beauty and her Prince also had the same complexion (I decided later on in life that they would have worn the same exact shade of foundation). I couldn't get over the fact that when the Beast turned back into a handsome, surprisingly well-groomed human in the animated version of Beauty and the Beast, he and Belle looked like they could be related.

Over the course of my childhood, I thought a lot about these kisses. Not because I found these princes to be particularly attractive (on the contrary, I found every last one of the princes to be boring AF, save for the adventurous Aladdin), but because these romances looked nothing like my reality — because I was raised in a multicultural home, with parents who were an interracial couple.

Having a Korean mother and an Italian father felt completely normal in the early stages of my childhood; it didn't even occur to me that all my friends had same-race parents while I didn't. But I, like many of my peers, learned some of my first life lessons from TV and films, including the Disney movies and TV shows I watched on the weekends. And with every same-race couple I saw on the screen, my interracial parents felt less normal to me.

Nobody told me outright that having parents of different races wasn't normal. They didn't have to. It was enough to see the norm of same-race romance play out in all my favorite Disney movies, which I then connected to the rest of my life, allowing me to finally notice that none of the other parents in school looked like mine.

I eventually became so obsessed with the significance of race in the game of love that I started playing with my toys differently. For example, I had one male Polly Pocket doll who had black hair, caramel skin, and facial features that closely resembled someone who was Latino. My favorite female doll, on the other hand, was blonde and fair-skinned. They came in the same Polly Pocket kit, but even as I coupled off all my other dolls for a last-minute wedding I decided to throw, I refused to pair them off as dates. They simply didn't feel like they belonged together anymore.

By the time I got to middle school, I'm sad to admit that I was downright embarrassed of the fact that my parents looked so different from each other. I became self-conscious — or paranoid, perhaps — that people were staring at the three of us when we walked through the grocery store together. My mother's Asian features suddenly felt so prominent when set against the blue eyes and fairer characteristics of my father.

The times I got teased in my tween years for my racial identity were particularly painful; I took everything to heart because I spent so much time on my own furiously thinking about the oddity of my interracial parents. So when a girl from my youth group at church badgered me about whether my mom speaks English (she does) and why on earth my parents got married (they loved each other), I locked myself in a bathroom stall and quietly cried into a wad of toilet paper.

When I learned that this year's live action Beauty and the Beast would feature not one, but two interracial kisses in the storyline, I nearly fainted from the shock of it all. Cadenza the piano, played by Stanley Tucci, and Madame de Garderobe the wardrobe, played by Audra McDonald, make up the first interracial couple to share a smooch. The second will be Ewan McGregor's Lumiere the candelabra and Gugu Mbatha-Raw's Plumette the feather duster, two of my favorite characters from the animated 1991 film.

The magical world of Belle and the mysterious castle suddenly felt a bit different to me, knowing that it wasn't simply a cast of white people. It may seem like a small detail from the outside looking in, but to me, it felt like a tremendous step in the right direction — a step I wish had been taken in the Disney universe when I was a kid.

What we see in the movies and on TV should reflect our reality. Just like we deserve to see more stories like Moonlight on the big screen, we also deserve to see storylines that reflect the beauty and normalcy of interracial couples.

According to the Pew Research Center, the number of interracial couples in the U.S. reached an all-time high in 2012, when 4.8 million marriages were reported to be interracial. In 2013, 12 percent of all newlyweds across the country were different-race couples. I can only assume that now, there are even more interracial couples, which means there will be millions of children who grew up like me — in a multiracial home with interracial parents.

I imagine there are countless kids in schools across America who feel anxious about their multiracial background. Witnessing a couple interracial romances in Beauty and the Beast isn't going to cure them of their self-doubt — but I truly believe it will help them feel less ostracized, less alone, less abnormal. Because even though my discomfort around my interracial parents didn't arise directly from the children's movies I saw, there was certainly a correlation between the two that contributed to my deep insecurity.

In many ways, the live action Beauty and the Beast is a groundbreaking tale. In addition to the interracial kisses, there's a feminist twist on the story and there will be an LGBTQ plot that's never been seen before in Disney films. As much as I would have liked to see all of these factors introduced in the 1991 animated movie, I can at least relish in the comfort that the Disney landscape is changing, slowly but surely. Which hopefully means there will be at least one less kid who grows up in a cloud of confusion like I did.