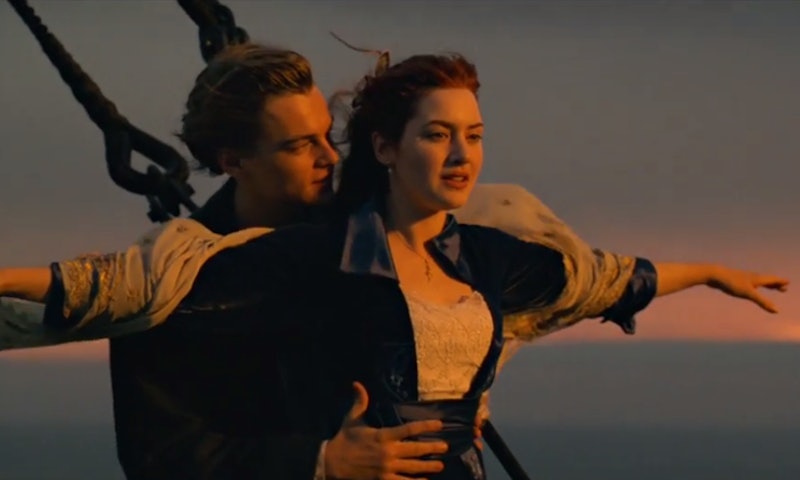 It's officially been 20 years since Jack and Rose sailed into your heart. Now, director James Cameron is celebrating Titanic's anniversary with a new documentary set to explore the film's historical accuracy, according to Entertainment Weekly. As hard as it is to believe, two decades have passed since the film's premiere, and in that time, there have been fresh discoveries about the real life disaster than inspired the movie. Together with the National Geographic channel, the director is ready to head back to the Titanic and see how factual his film is today.

Cameron remains deeply committed to getting the details of Titanic just right. Even though Jack and Rose's love story is the stuff of fiction, the rest of the movie sought to be an accurate depiction of the ship's history. The documentary will feature Cameron looking back on his journey making the film, examine the movie's accuracy, and follow the director and a team of experts as they visit the Titanic exhibit at the Ronald Reagan Presidential Library. It's set to air on NatGeo in December.

In a statement to EW, Cameron explained his goal for the documentary. He said,

"When I wrote the film, and when I set out to direct it, I wanted every detail to be as accurate as I could make it, and every harrowing moment of the ship's final hours accounted for. I was creating a living history; I had to get it right out of respect for the many who died and for their legacy. But did I really get it right? Now, with National Geographic and with the latest research, science and technology, I'm going to reassess."

For those hoping this means he might rethink his stance on Jack's death, don't hold your breath. Even the Mythbusters crew couldn't get him to admit that door was big enough for Jack and Rose.

Even though there's little chance of getting justice for Jack, it sounds like the documentary will be a must-see for Titanic fans and history buffs alike. The movie is still the second-highest grossing film of all time (only Cameron's Avatar made more money), and it's a beloved classic. Since it's based on true events, there's always a reason to go back to Titanic, even if it's just to marvel at how amazing it still looks 20 years after it hit the big screen.

It doesn't matter whether or not the documentary offers up any big new discoveries; for fans, any opportunity to learn more about this incredible film is bound to be exciting.

More like this
22 Movies On Netflix That Are Perfect For The Whole Family
By Bustle Editors
Before 'Bullet Train,' Revisit These Brad Pitt 'Fight Club' Premiere Photos From 1999
By Grace Wehniainen
Jennifer Coolidge Needs 'Legally Blonde 3' To Happen So She Stops Getting Hot Dog Jokes
By Jake Viswanath
Reese Witherspoon Gave Fans Hope For 'Legally Blonde 3' After This Surprising Movie Inspired Her
By Jake Viswanath
Get Even More From Bustle — Sign Up For The Newsletter