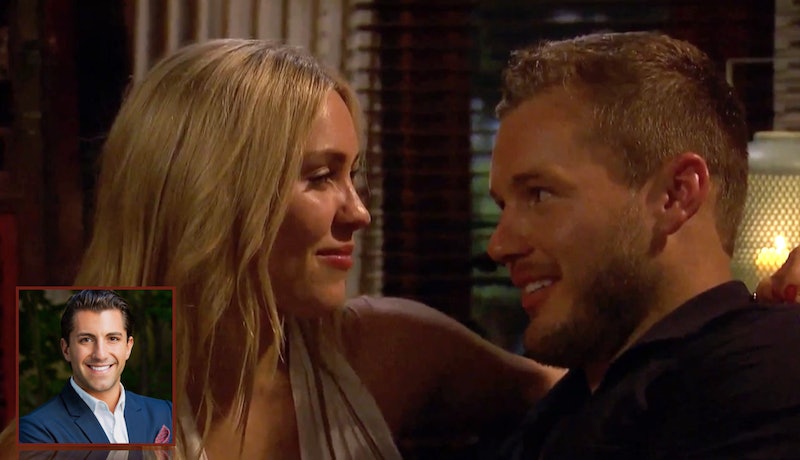 While competing on Becca Kufrin's Bachelorette season, Jason Tartick experienced love and heartbreak on national television. Now that he's been through it all, he has plenty of words of wisdom for new contestants, and he's dishing all to Bustle. Read what Jason has to say about Colton's chemistry with Cassie on The Bachelor and more in this week's recap.

From the Bachelor Mansion in Los Angeles, to Singapore, to Khao Lak, Thailand, one would say that this is the best first five weeks of travel the Bachelor franchise has ever had! Regardless of the scene, every season has its weak episodes, and this was one of them. My candid opinion regarding this episode was sparked by the limited depth of conversations, baffling bickering, dry drama, and lack of Chris Harrison. That said, the charm of Tayshia and the undeniable chemistry between Cassie and Colton did save this episode. Let’s break it down.

The innuendos, close-ups of Colton's lips, and constant discussion of Heather’s status as "Never Been Kissed" was a dead giveaway that this date would inevitably lead to Heather’s first kiss. Heather and Colton looked cute together, but I was having flashbacks to Hannah B.’s one-on-one. It was difficult for me to connect with the conversation of this date, because it just didn’t have the depth that screams "you are my life partner." While I couldn’t see that connection, I certainly was rooting for that first romantic kiss for Heather. My jaw hit the floor when Colton presented Heather with the rose at dinner and they only hugged — thank god for those fireworks and that kiss later.

Congratulations to Heather and her first kiss! I'm happy for her.

“On a scale of 1 to Hot, Colton is Hot!” Cassie says in the beginning of this episode. On this date, we certainly learned that Colton feels the same. Colton and Cassie have undeniable physical chemistry. As a friend of Colton’s, I was genuinely so happy to see him this giddy. However, is it me, or did they legitimately just make out the entire date? Either way, this episode has me very invested in #TeamCassie! She seems so sweet, down to earth, and compatible with Colt.

As for Elyse's departure, she was the hero The Bachelor deserves, but not the one it needs right now. Elyse’s maturity and authenticity will be missed. I really hope we see Elyse on Paradise!

These girls are queens of the freakin’ jungle! They were playing with scorpions and eating bugs whole! To think that on my season, we were complaining about the room temperature while singing on stage with Wayne Newton. If I had a dollar for every time I saw Colton pull the “bug eating trick” with a shot of liquor, I’d be rich enough to retire. Veteran move, my man!

Speaking of eating a bug whole, bravo to Hannah B. for winning the MIP (Most Improved Player) award. It was a complete transition from two episodes ago, when she said, “I think he hates me.” This episode she tells Colton she’s falling in love with him, and I'm happy that pageant-gate is over. Congrats to Hannah B., whose turnaround was impressive yet awfully quick!

The MVP of the group date, though, goes to Tayshia. I loved when she took Colton aside during the date to kiss him. She understands the value of time with Colton and always seems to make the most of it, and she seems down to earth and brings charm to her relationship with Colton. I'm #TeamTayshia for sure. If I didn’t still have a headache from Nicole and Onyeka yelling at one another, I would comment more on this drama, but for now I’ll stick to the Advil. Similar to Colton’s reaction to the quarrel, I will remove myself from getting involved with this one.

After watching this episode closely, I still have some burning questions about this season and what’s to come: Do we even have a villain this season, or do we just have a new villain every episode? Will there even be an epic two-on-one date? Can we please cut just one Colton shower scene for an explanation of what happened to Kirpa’s chin? (I felt bad for her and was dying to know!) And last but not least, where was Chris Harrison? This episode was just another reason why we all need more of TV’s best host next week.