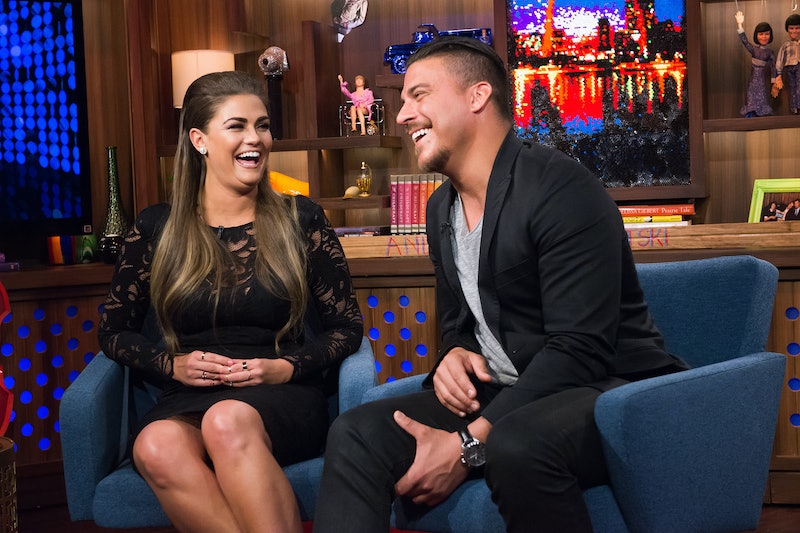 After weeks of prolonged build-up, Jax and Brittany's wedding aired during Vanderpump Rules' March 17 episode, and all we can say is finally. The ceremony was everything that Brittany dreamt it to be, from the countryside castle to the afterparty filled with Hooters girls and wings. But it was everyone around her that made she and Jax's day unforgettable...for better or for worse. From Kristen's "will we or won't we?" drama with Carter to Schwartz being completely unprepared as best man, Jax and Brittany's wedding brought out different emotions in everyone. Let's review, shall we? Because truly, we have nothing better to do.

Everyone at the wedding knew that Stassi and Beau would be the next couple to walk down the aisle (unless you count Schwartz and Katie's second — and actually legal — wedding), including Stassi and Beau. But while Stassi was busy dreaming of her own big day, Beau pulled her back to reality, saying they'll get engaged when he's ready. And now we wait for the proposal...

Kristen was a very gracious, go-with-the-flow bridesmaid all weekend... until Carter showed up. Whether defending their relationship, avoiding Carter, or getting into a full-on fight, Kristen was all over the place emotionally. Of course, after chasing each other around the castle, they ended up in bed together... with Scheana as the third wheel.

Katie spent the same amount of time steaming Brittany's wedding dress as it would take to watch The Notebook, if that's any indication of how seriously she took her matron of honor role. Meanwhile, Schwartz was nervous as hell, between holding the wedding bands (which he almost lost) and giving his best man speech (which lasted 20 minutes). He tried his best, OK?

Sandoval tried to overcompensate for his and Jax's fight by being the best best man in all of existence. From vodka to tampons, he made sure everyone had what they needed, though it unfortunately still wasn't enough for Jax, who gave Sandoval a "B minus or C" for his groomsmen services. Meanwhile, Ariana was just trying to have a good time. Love that for her.

Despite coming as a couple, Lala and Randall's wedding reactions were very different. Lala got teary-eyed at the father-daughter dance while remembering her own late father, but otherwise went into wedding planning mode, taking note of the things she did and didn't want (aka the Hooters girls) at her own nuptials. Randall, meanwhile, was a little too chill, forgetting to get ready with the groomsmen after cuddling in bed with Beau. Honestly, can you blame him?

The wedding brought out Scheana's thirst — big time. After completing her bridesmaid duties, she made out with a random groomsman at the Hooters afterparty... then ended up in bed with Kristen and Carter.

Despite Lisa's mother dying days before the ceremony, she and Ken surprised everyone and flew to Kentucky for the wedding, inciting a lot of crying. And the tears didn't stop there: Lisa hilariously impersonated Jax and Brittany with new officiant Lance Bass before the ceremony, then stepped into maternal mode for Jax since his mother wasn't there.

Ultimately, the whole wedding landed somewhere between heartfelt and a total sh*t show, which feels right for this group.

More like this
Here’s What Happens To Bill & Frank In 'The Last Of Us' Video Game
By Brad Witter
Who Is Allison Williams Dating After Her Divorce? She’s Engaged With A Child
By Jake Viswanath
'RHOP' Stars Robyn & Juan Reportedly Got Remarried & Filmed The Ceremony
By Brad Witter
Who Is Pete Davidson Dating? He & Chase Sui Wonders Got Caught Kissing
By Jake Viswanath
Get Even More From Bustle — Sign Up For The Newsletter
From hair trends to relationship advice, our daily newsletter has everything you need to sound like a person who’s on TikTok, even if you aren’t.