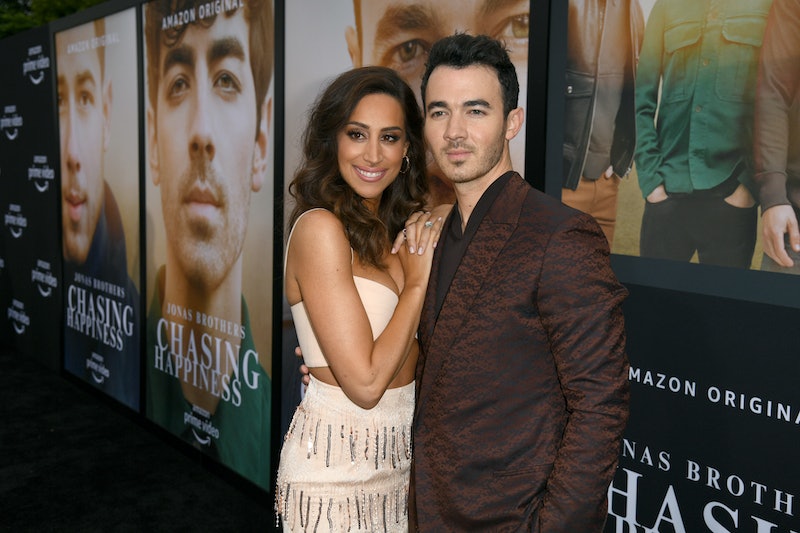 Ever since the Jonas Brothers made their surprise comeback, fans have been going wild over the love that Kevin Jonas, Joe Jonas, and Nick Jonas have for their wives. And though Priyanka Chopra and Sophie Turner may get more attention due to their own careers in entertainment, Kevin's relationship with Danielle Jonas still has its share of sweet moments that anyone can recognize as true love — including Kevin's brothers.

The Jonas Brothers released their documentary, Chasing Happiness, on Amazon Prime Video on June 4, giving fans old and new a chance to see them navigating life as they grew both as artists and people. This meant that the three discussed everything from the time Nick dated Miley Cyrus to Kevin's heartbreaking experience with bullying. That said, not all of the moments were serious — their sibling relationship meant that the three weren't afraid to give each other a hard time. In Kevin's case, this meant getting teased by Joe and Nick about his then-budding relationship with Danielle.

One of the cutest scenes in the doc happened in November 2007, during the height of the Jonas Brothers' popularity. The three were in the car while Kevin talked to Danielle on the phone, working out logistics so she could see them perform. It's adorable how clearly nervous he was about seeing her (seriously, he unironically uses the word "rockin'" multiple times), especially knowing now that Danielle and Kevin are now happily married with two children.

Joe and Nick were clearly invested in the relationship, as they took great pleasure in trying to help their brother get the girl. Joe turned to the camera during the phone call and whispered, "It's Kevin's future wife." And, well, he wasn't wrong: Danielle and Kevin had met earlier that year, while on vacation in the Bahamas, and got married just two years later. They will be celebrating their 10th anniversary in just a few months.

Nick and Joe continued to hilariously egg Kevin on, feeding him lines to tell Danielle. "Say you're excited to see her," Joe advised. Kevin ultimately fumbled it, and, I'm sorry, but Joe's reaction face to the botched flirting attempt is the best thing I've ever seen:

Kevin was clearly flustered after the phone call. "Don't talk to me while I'm on the phone anymore," he told his brothers. Nick, smirking, replied, "Sorry, we're just really excited... because she's your wife."

While I do feel for Kevin — nobody wants their siblings meddling in their love lives — I have to admit that watching this moment 12 years down the line is equal parts funny and sweet. And even if Kevin stumbled over his words a few times, Danielle must have known he was a catch.

Their marriage has been through quite a bit, including the band's breakup in 2013; the birth of their two daughters, Alena and Valentina; and two seasons of Married to Jonas, their reality show on E! Network. Despite the hectic nature of their lives, however, Danielle continues to show her support for Kevin's music on Instagram.

Now that the doc is out, the Jonas Brothers are gearing up for their next big thing: their first album since the hiatus, Happiness Begins, drops on June 7. After that, they have the Happiness Begins Tour, which starts Aug. 7 and has dates through early 2020. But no matter where they're headed or what they're doing, it seems like Kevin and Danielle's love is going to remain strong through it all.