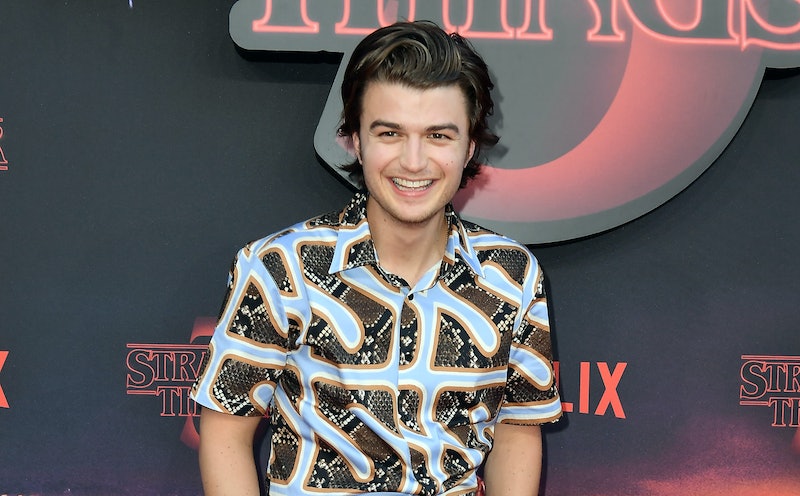 Steve Harrington may not have been the cool guy he once was in Stranger Things 3, but the same can't be said for the actor who portrays him. Stranger Things' Joe Keery released a new song and somehow the actor/musician made himself even more cool in the process. Keery has been part of bands throughout his Stranger Things tenure. But his song "Roddy" from his new music project Djo comes all from Keery's creative mind. While only weirdos and band geeks like Steve's Scoops Ahoy coworker Robin would be caught dead releasing a dreamy psychedelic-rock song, Keery clearly isn't about those primitive constructs — and it only makes him more popular with Stranger Things fans.

Steve's glory days at Hawkins High of being the star basketball player and prom king are over in Stranger Things. But what makes someone "cool" in high school in the early 1980s is far different than what makes someone cool to Stranger Things fans in 2019. Keery gives off an effortlessly chill and artistic vibe in interviews and on social media. And his latest music offering "Roddy" is no exception as he sings on the single, "There's something wrong with this world/I feel it coming on/And contradictions take their toll/Is that where we went wrong?"

Keery's music stands on its own and doesn't need to be defined by his Stranger Things role. But it is interesting that he sings about "Roddy" and "being locked in retrograde." While science isn't Steve's strong suit (he leaves that to his pal Dustin), Roddy is the name of an asteroid that was discovered in 1984. Keery's lyrics may have absolutely nothing to do with interstellar space travel, but the potential connection is still fun to consider.

Before Djo (which one person on Twitter remarked could be pronounced as "Joe"), Keery had other musical ventures. He was a guitarist and vocalist for the band Post Animal. But as Keery told Bustle in a 2018 interview, he had to stop collaborating with the Chicago band due to his acting schedule. Keery also released music under Cool Cool Cool in 2013. You can spot him in the music video of "I'm Not Smart" below, which is oddly fitting considering Nancy Wheeler believed Steve to be "an idiot" when Stranger Things premiered in 2016.

Keery isn't the only Stranger Things cast member releasing new music. The younger set is also branching out when they aren't filming the Netflix hit show. Mike actor Finn Wolfhard leads the band Calpurnia and Dustin actor Gaten Matarazzo has the band Work in Progress. (Matarazzo also showed off his Broadway-approved singing skills during Stranger Things 3 through Dustin's "Never-Ending Story" duet with his girlfriend Suzie.) Even Steve's rival for Nancy's affections — Jonathan Byers — has a music background. Charlie Heaton has been in several bands, including Comanechi and Half Moon, and has played drums for artists like Faye Webster.

Stranger Things fans will definitely demand more of the "douchebag" turned mom Steve Harrington if there is a Season 4. But until then, be on the lookout for more music from Djo. Because even if popularity is a primitive construct, Keery makes looking cool sound good.