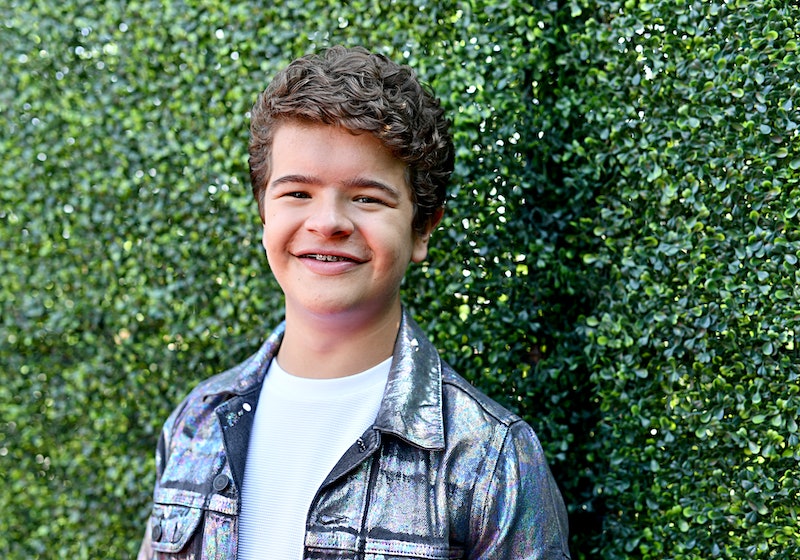 No, you're not in the Upside Down: Gaten Matarazzo’s singing voice really is that good. The actor, who plays Dustin in Stranger Things, is in a band called Work in Progress — but his talent is anything but that. In fact, at 16 years old, Matarazzo has already scored collaborations with some of music's biggest stars, including Paramore and Kelly Clarkson — and this is just his side gig.

One year ago, videos of Matarazzo singing "Misery Business" with Paramore during the alt-rock band's June 26 tour stop at Brooklyn's Barclay's Center left fans stunned. Even Paramore's lead singer Hayley Williams praised Matarazzo after the performance, tweeting: "the harmonies were so right. was NOT expecting that level of right-ness. thanks for hangin with us & our friends."

After all, who knew the lovable, curly-haired kid from Stranger Things had that in him? Well, besides anyone who's followed Work In Progress — which also includes Matarazzo's siblings, Sabrina and Carmen — and gotten hooked on their catchy covers, that is. In addition to their now-famous Paramore cover, the group has also won raves for their renditions of Fall Out Boy's "Sugar, We're Goin' Down" and "Everlong" by the Foo Fighters, just to name a few.

Although Matarazzo's favorite band to cover is a tie between Green Day and Pearl Jam ("Eddie Vedder’s voice was one I was ... fond of immediately, I feel comfortable singing his songs, he told The Aquarian Weekly in January 2018), he's proud of his group's versatility.

"Some cover bands focus on a specific genre, or specific type of rock, where they almost need an “identity” or to have their thing," he added to the New Jersey-based alternative weekly newspaper last year. "We don’t feel that way; we don’t need to just play one genre! We just want to play music that everyone likes, that we like ourselves. Not many bands go from Red Hot Chili Peppers, to Paramore, to Sublime, so it’s a nice setlist!"

Another clue to his vocal abilities: the time Matarazzo got to sing with Kelly Clarkson, of course. In a promo video for Canada's 2017 WE Day, he gave the three-time Grammy winner a lift in a golf cart, and, during the ride he joined Clarkson in duets of "We Are Family" and "We Are the Champions."

It's no surprise that he was able to hold his own, given the he began his career on the Great White Way. Back in 2014, Matarazzo played Gavroche in the Broadway revival of Les Miserables. "When I was younger, I definitely thought musical theater was sort of more pure than film," he revealed to Paste Magazine in 2017. "I used to say I’d never go to film because we had to get it right the first time in musical theater. But then, of course, I started doing film and realized I loved it."

He's certainly not the only musically gifted Stranger Things cast member. During a 2017 Motown parody with James Corden, Matarazzo crooned along with Stranger Things costars Finn Wolfhard, Caleb McLaughlin, and Noah Schnapp, to tunes that included the Jackson 5’s “I Want You Back,” The Temptations’ “My Girl,” and The Four Tops’ “Reach Out, I’ll Be There.” Wolfhard is also part of Vancouver-based band Capurnia, and McLaughlin appeared as a young Ricky Bell in BET's 2017 New Edition biopic. And who can forget that Steve Harrington, er, Joe Keery is in a group called Post Animal.

Clearly, there's nothing strange about these guys' talents.