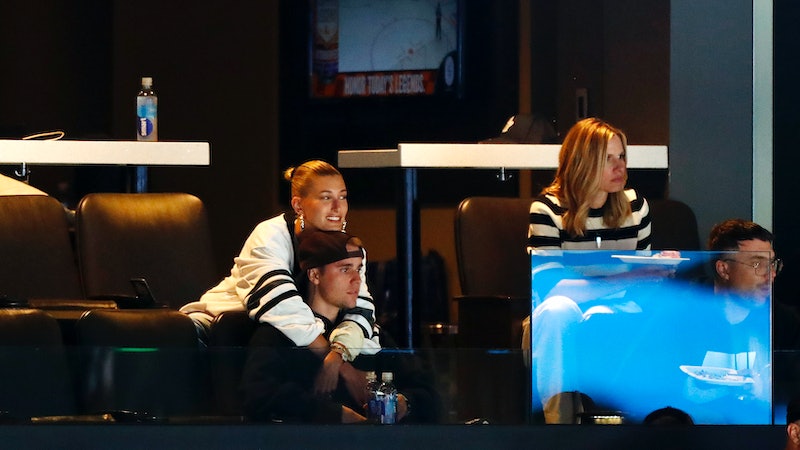 Their (second) wedding is over, but it looks like the honeymoon phase is just beginning for Mr. and Mrs. Bieber. Proving that the happy couple is more in love than ever, Justin Bieber and Hailey Baldwin's post-wedding video message poked fun at the idea that the love is gone now that they have officially tied the knot once more.

The day after their lavish, star-studded, second ceremony in South Carolina, Bieber posted a video to his Instagram Story where he jokingly chastised his wife for covering him in kisses. As the model leans over to give Bieber a series of playful kisses, the singer jokes, "Get off of me!" before explaining how things are different now that they're officially married once more. "We're married now," he says in the video. "No more love now. That's what happens, you get married and everything…"

However, once Baldwin pretended to be hurt by Bieber's antics, he quickly apologized, explaining that he was "just kidding." (For the record, he also wrote the word "kidding" on top of the video, so that Beliebers everywhere knew there was no trouble in paradise.) In response, Baldwin showed off a mock-pout, and declared, "You're being mean to me," before breaking down into giggles.

On her own Instagram Story, Baldwin shared tons of photos from the big day featuring her famous friends and loved ones. In one snap, the model showed off the custom Celine leather jacket that she wore to the reception, bearing the word "wife" across the back. "Best night of my life," Baldwin captioned the snap, which showed her grinning in the photo booth. She also shared a series of photos with her new husband, captioned simply with a heart emoji; Bieber shared the same pictures on his own page, where he declared that he is "Looking forward to forever with" Baldwin.

Bieber and Baldwin first tied the knot in September 2018, in a secret courthouse ceremony in New York City. Shortly after celebrating their first anniversary, they cemented their love once more with a religious ceremony at the Montage Hotel's Palmetto Bluff location in South Carolina. After the ups and downs that came with their first year of marriage, it seems clear that this second wedding was meant to be a true celebration of their love and the strength of their relationship now that they're settled into the idea of being husband and wife.

Baldwin underscored that idea in a recent interview with Vogue Australia, where she reflected on her comments about marriage being "hard work." Explaining that things have gotten easier since tying the knot, Baldwin told the outlet, "I said [marriage was hard] when we had first married. Look, marriage is always going to be hard and I think good relationships are the relationships that you put the work into."

"Specifically, I said that when there were a lot of new things," she explained. "I never had to cohabit with somebody in that way, so I was learning how to share space with someone for the first time. We were trying to bend in each other’s direction and learn what was comfortable." Since then, the model revealed, "it’s easier, because we’ve found a rhythm. We have more fun together, which is what should happen when you spend more time with someone you love."

Based on the first post-wedding video, it seems that Bieber and Baldwin are definitely having a lot of fun together — and are very much enjoying being husband and wife.

More like this
Leona Lewis & Husband Dennis Jauch Welcomed Their First Child
By Darshita Goyal
Who Is Camila Cabello Dating? She's Getting Cozy With Lox Club CEO Austin Kevitch
By Radhika Menon
Kanye West Has The Most Kanye Reaction To Kim Kardashian & Pete Davidson's Split
By Jake Viswanath
Who Is Bad Bunny Dating? Gabriela Berlingeri's Vocals Are Featured On His Song "En Casita"
By Radhika Menon
Get Even More From Bustle — Sign Up For The Newsletter