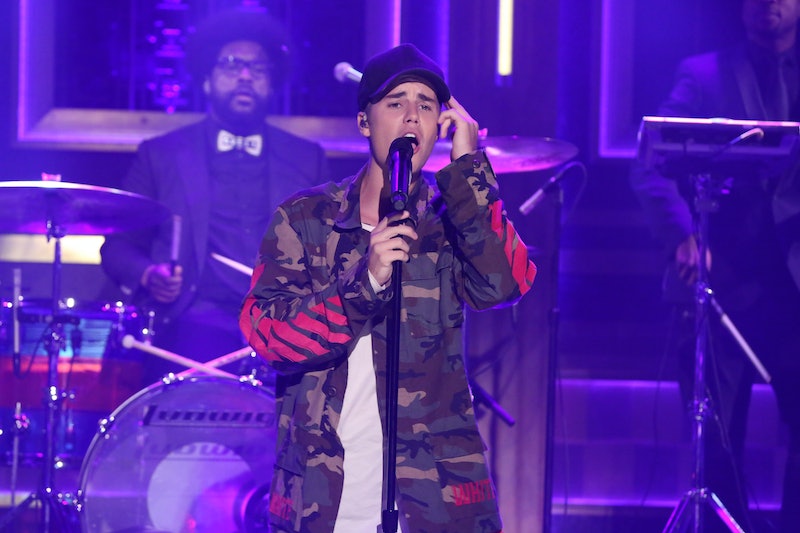 Get ready to see a lot more of Justin Bieber in 2020. Nearly three years after the singer abruptly ended his Purpose World Tour, Justin Bieber will perform at the iHeartRadio Music Awards on March 29, as part of his return to the spotlight after taking an extended break to look after his health. The singer is nominated in five categories at the annual award show, including Best Collaboration with Ed Sheeran, Best Fan Army, and the fan-voted Best Lyrics category for "10,000 Hours" with Dan + Shay.

Bieber has been preparing for a major comeback in 2020; in addition to releasing his first single in four years, "Yummy," the singer will also drop a 10-part documentary series on YouTube on January 27 that chronicles the writing and recording of his upcoming fifth studio album. Justin Bieber: Seasons will also give fans some insight into Bieber's mental and physical health struggles from the past few years, including explaining why he decided to abruptly cancel the final leg of his Purpose tour in 2017.

"I feel like this is different than the previous albums, just because of where I'm at in my life," Bieber said in a YouTube video released on Christmas Eve. In addition to teasing his new album in the clip, Bieber promised a return to the stage, telling fans that he was excited to perform the new music and announcing a North America arena tour beginning in the spring of 2020.

Back in March, Bieber opened up about the toll that touring took on his mental health, and explained that he wanted to wait until he was in a better place to release new music. "I’ve toured my whole teenage life, and early 20s, [and] I realized and as you guys probably saw I was unhappy last tour," the singer wrote on Instagram. "I don’t deserve that and you don’t deserve that, you pay money to come and have a lively energetic fun light concert and I was unable emotionally to give you that near the end of the tour."

Bieber continued, "I have been looking, seeking, trial and error as most of us do, I am now very focused on repairing some of the deep rooted issues that I have as most of us have, so that I don’t fall apart, so that I can sustain my marriage and be the father I want to be." The singer also told fans that while "music is very important to me," he has learned that "nothing comes before my family and my health," and needed to use his break from the spotlight to focus on his new priorities.

While Bieber has shared quite a bit about his plans for the upcoming year with fans, one thing that he has not yet revealed is the title of his new album — although some eagle-eyed Beliebers think he may have dropped a big hint with his new ink. In early December, Bieber showed off a tattoo of the word "Forever," on his neck, which is notable because the singer has also tattooed the names of two of his earlier albums — Purpose and Believe — on his body.

Regardless of what Bieber's album is called — or when he decides to finally release it — it's clear that taking time away from the spotlight was exactly what he needed. Get ready Beliebers: 2020 is the Year of Bieber.

More like this
Britney Spears Shares & Deletes Photos Of Justin Timberlake From 22 Years Ago
By Jake Viswanath
Hailey Bieber Went Pantsless In A Hoodie By Justin's Brand Drew House
By Dominique Norman
Cruz Beckham Teased New Music With An Adorable Nod To Mom Victoria Beckham
By Stephanie Topacio Long
"Lavender Haze" Star Laith Ashley Breaks Down Filming With Taylor Swift
By Jake Viswanath
Get Even More From Bustle — Sign Up For The Newsletter
From hair trends to relationship advice, our daily newsletter has everything you need to sound like a person who’s on TikTok, even if you aren’t.