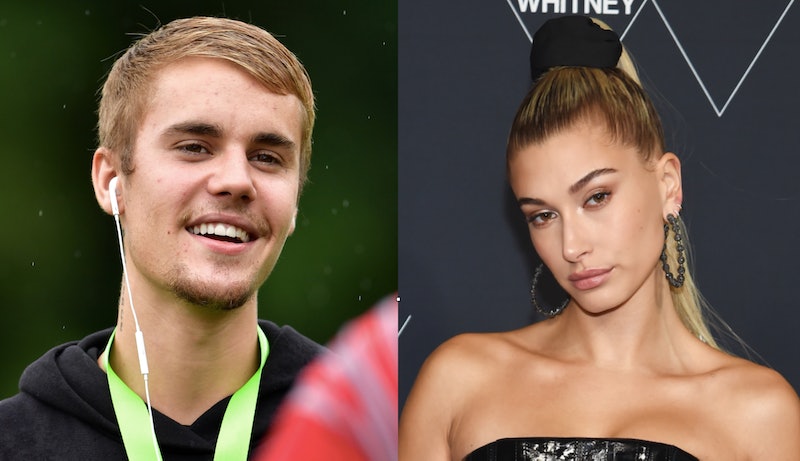 Labor Day has come and gone, but summer is still going strong and the Baldwin-Biebers are making the most of it. On Tuesday, Sept. 3, Justin and Hailey Bieber hit the beach for what looked like a really chill ’n’ fun date. The last couple of years have been a real whirlwind for the two, and it is nice to see them hit the pause button, enjoy each other's company, and soak up that salt air. Not a bad way to unwind before they dive into the final weeks leading up to their second wedding day, which will reportedly happen at the end of September.

The couple documented the excursion on Instagram, showing their followers the beach they sat on, the cooler of wine and Coronas they lugged across the sand, and the fire they sat by. In an IG Story, she posted a photo of Justin snapping a pic of the fire, Hailey wrote, “hi (future) baby Daddy."

Yes, she added some fuel to the flame that is all of the speculation about whether or not she's pregnant, and no, there is no need to hit the brakes. Hailey is almost certainly referencing the kids she and Justin plan to have at some point, not dropping an informal announcement on an Instagram Story that will disappear 24 hours after it went up.

And what would a Bieber beach day be without some a few things from Drew House? It really does not get much better than ice cold Corona, the sound of the ocean crawling up and down the shore, and splatter paint smiley face socks.

The beach date IG posts arrived on the heels of the “What Do You Mean?” singer’s candid IG post about the complicated and difficult road that led him to where his now. On Monday, Sept 2, Bieber opened up about his relationships, the pitfalls of child stardom, and drug use. Near the end of he note, he wrote,

“I started doing pretty heavy drugs at 19 and abused all my relationships. I Became resentful, disrespectful to women, and angry. I became distant to everyone who loved me, and i was hiding behind, a shell of a person that i had become. i felt like i could never turn it around. It’s taken me years to bounce back from all of these terrible decisions, fix broken relationships, and change relationship habits. Luckily god blessed me with extraordinary people who love me for me. Now i am navigating the best season of my life ‘MARRIAGE’ !! Which is an amazing crazy new responsibility.”

The "best season" of Justin's life has been going on for about a year: The two tied the knot at a courthouse in September 2018, and Justin confirmed their marital status the day after Thanksgiving on Instagram. He wrote, "First thanksgiving as a married man, first time hosting thanksgiving."

Though they are already have the papers that say they are legally husband and wife, the Biebers are not out of wedding mode just yet. They've been planning to host a ceremony for friends and family for some time, and it looks like they're in the home stretch. Last month, TMZ shared a photo of what is reportedly the couple’s save the date, which indicates their formal wedding is set to take place on September 30 in South Carolina.

The Biebers have had quite a bit on their plate these last few months. A source recently told People that it's been a "super busy" summer for the pair, thanks to "work and planning their wedding." It's lovely to see them take in the summer's quieter moments together.