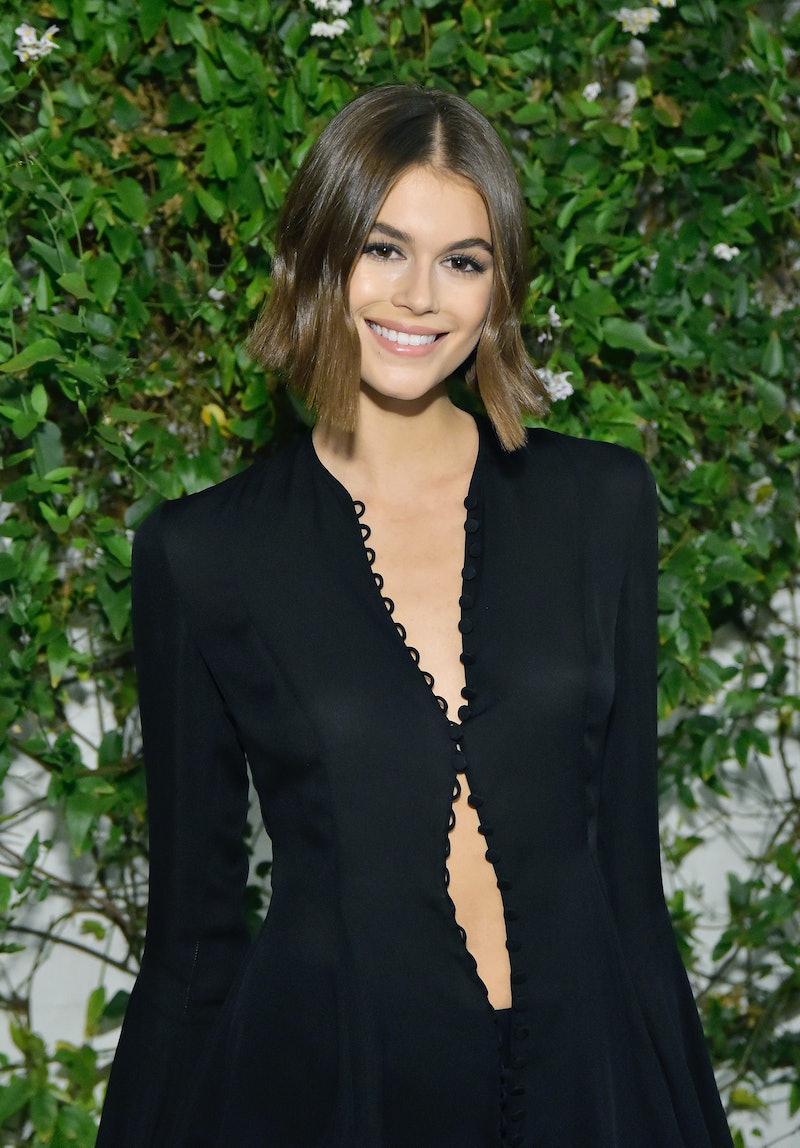 Kaia Gerber and Pete Davidson have been spotted together a few times lately. Most recently, Gerber and Davidson spent time in her hometown of Malibu, California. On Tuesday, Nov. 5, the Daily Mail published photos from their reported visit, which may have been a date. Davidson is usually spotted in New York City, where he's a Saturday Night Live cast member. (Bustle previously reached out to Davidson's manager and Gerber's reps for comment on the dating rumors, but has not yet received a response.)

Daily Mail reported that Davidson and Gerber went to dinner at Nobu before he drove her home, to her parents Cindy Crawford and Rande Gerber's mansion. This Malibu dinner wasn't the first time that the SNL cast member and the model have been seen together. According to Us Weekly, Davidson and Gerber got lunch together in New York at a restaurant called Sadelle's on Oct. 20. An eyewitness told the publication, "Pete appeared happy to be with Kaia, and she seemed like she was into Pete, though there was no PDA."

On Oct. 23, Page Six shared paparazzi photos of the comedian leaving Gerber's apartment in New York City. The site also pointed out that Davidson walked in an Alexander Wang fashion show in June that Gerber also modeled in. It's possible they could have met at that event, but Davidson was dating Kate Beckinsale at that time. Davidson and Beckinsale were first linked when they were spotted at a Golden Globes after-party in January, but breakup speculation started to circulate in May 2019.

After his romance with Beckinsale ended, Davidson was spotted with actor Margaret Qualley in August, whose mom is actor Andi MacDowell. The couple reportedly split up in mid-October after several months of dating, which included a being spotted together at the Venice Film Festival in Italy.

Before that, Davidson was famously engaged to Ariana Grande after their romance went public in May 2018. They eventually called off their engagement and broke up in October 2018.

In March 2019, Gerber was reportedly in a relationship with fellow model Grant Wellington. In September 2019, Gerber discussed her love life in a British Vogue interview. She said, "When I'm working, I don't have the energy to even flirt with anyone. I'm sorry, I just can't But I'm not losing hope in all love forever." She even joked, "I have backgammon at my house, and that's all a girl needs. When I'm home, I'm living the life of a 70-year-old woman."

As of this moment, neither Davidson nor Gerber has confirmed a romantic relationship, but they haven't denied one either.

More like this
Who Is Pete Davidson Dating? He & Chase Sui Wonders Got Caught Kissing
By Jake Viswanath
Selena Gomez Confirms She's Single Amid Drew Taggart Dating Rumors
By Martha Sorren, Jake Viswanath and Jack Irvin
Who Is "Daddy" Pedro Pascal Dating? People Are Thirsting Over The 'Last Of Us' Star
By Alyssa Lapid
Michael B. Jordan Tackled His "Public Breakup" With Lori Harvey On 'SNL'
By Brad Witter
Get Even More From Bustle — Sign Up For The Newsletter
From hair trends to relationship advice, our daily newsletter has everything you need to sound like a person who’s on TikTok, even if you aren’t.