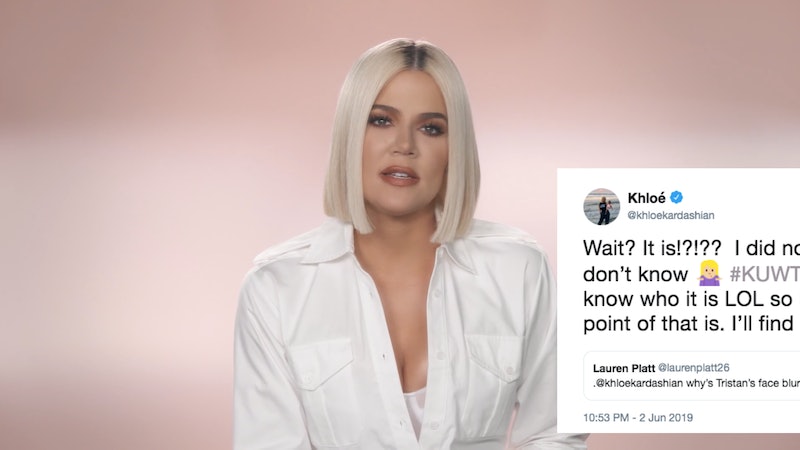 During the Sunday, June 2 episode of Keeping Up With the Kardashians, Khloé Kardashian's relationship with Tristan Thompson was the topic of conversation. He even appeared in scenes and in photos... but his face was always blurred out. That's not something that's happened when he's appeared on-screen before, so why now? Well, Kardashian's reaction to Thompson's face being blurred on KUWTK proves that she was just as surprised as the viewers. No, she had nothing to do with it. And believe it or not, she only realized when fans pointed it out on Twitter.

On Sunday night, a KUWTK fan asked the reality TV star why her ex-boyfriend's face was blurred out from the episode. Kardashian responded,

Even though her last name is in the show's title and she has a major voice, when it comes down to it, Kardashian is not the person who edits the episodes. But either way, at least the blurriness didn't inhibit the storytelling on the show. As Kardashian's tweet pointed out, we "obviously know who it is."

Kardashian didn't confirm exactly why Thompson got blurred out, but she did confirm a logical solution: "he might not have signed a waiver to show those images." When a viewer asked if he needed to sign a waiver, Kardashian confirmed that there is. And once again, she confirmed it was not her call, writing, "Why would I want to blur his face? I’m not hiding his identity LOL."

While it's not confirmed that this is the specific reason for his face being hidden, if he did decide to not give his permission to appear, it wouldn't exactly be surprising. He's really not faring well in the court of public opinion lately, and he barely appeared on the show when he and Kardashian appeared to be a happy couple. Since then, there have been multiple cheating claims and a lot of scrutiny aimed at both Kardashian and Thompson.

Kardashian is famous for sharing her life on reality TV, but this does not seem to be up Thompson's alley. After all, before he started dating Kardashian, he maintained a relatively low-profile playing for the Cleveland Cavaliers. Their relationship put him into the spotlight more than ever before.

As fans will likely recall, in April 2018, Thompson was reportedly photographed with multiple women that were not Kardashian. This was just days before Kardashian gave birth to their daughter True. That scandal was extremely public. Even so, the parents tried to move past the drama and continue their relationship. That is what the fans watched on Keeping Up With the Kardashians' latest episode.

In the episode, Kim Kardashian expressed concern over her sister's relationship with Thompson while talking to her longtime best friend Malika Haqq. After that talk, Malika visited Kardashian, Thompson, and True in Clevelend to check in and express some worries of her own. She praised her friend for putting on a brave face, but as we all now know, that difficult time was the calm before another storm.

This all took place before the couple's latest cheating scandal. Kardashian and Thompson split at the end of February amid rumors that he cheated with Jordyn Woods, Kylie Jenner's best friend. Woods denied being "intimate" with the NBA player during a March 1 episode of Red Table Talk. And for the most part that's all we know for sure. This season of KUWTK is just building up until that story.

Even though we know that they split, will Kardashian fill in more details? She might, but if she does, we will probably not be seeing Thompson's face. At least not this season.