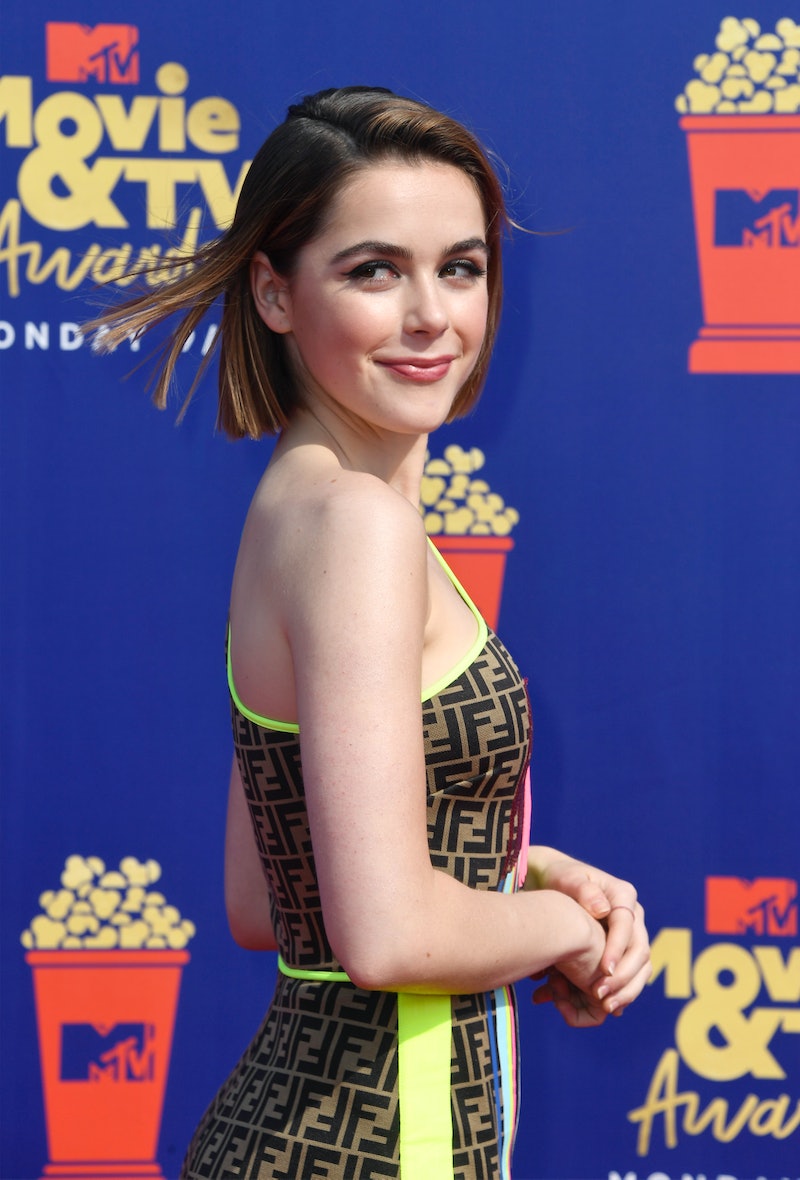 If you're a Netflix binge watcher, there are certain shows that you've probably seen every episode of or at least have heard about. Netflix's Chilling Adventures of Sabrina is one of them. The witchy show centers on the white-blonde haired Sabrina, but Kiernan Shipka's 2019 MTV Movie & TV Awards look proves that this actor isn't taking her character home with her. Honestly, that may be a good thing.

Shipka walked the red carpet at the MTV show with her co-stars Ross Lynch and Gavin Leatherwood, the actors who play her character's love interests on the show: Harvey and Nick. At the show, though, it's Shipka who scored the nomination. The actor is nominated at the ceremony for Best Performance for her work in the Netflix series.

For her look, Shipka wore a one-shoulder, column silhouette midi dress from Fendi. The frock featured the Fendi logo pattern as well as stripes of color running down the down in what could very well be a celebration of Pride. On the front of the dress, Fendi, Roma, and Amor seem to be written in large, multi-colored script. Honestly, though, Shipka's dress isn't her biggest wow of the night. For the awards show, the Sabrina actor maybe rocking darker, brunette hair color.

The hair change is kind of major for one obvious reason. Fans are used to seeing the actor in a white wig for her role as Sabrina Spellman in the Netflix series. Even before the season one finale of the series where the character finally signs the Book of the Beast and comes into her full power (thus resulting in her white hair), the actor had blonde hair as the teenage witch. Now, that Spellman look is all gone at the 2019 MTV Movie & TV Awards.

While Shipka is actually blonde (if you remember her from her Mad Men days, you know this), she's not nearly the platinum of her character. Her hair is a markedly darker shade of blonde, but for the red carpet, her hair seem even darker than normal. Shipka is rocking a perfect shadow root that's a deep brown and her strands appear to be a darker caramel color.

If you remember the 2019 Billboard Music Awards, you may recall that Shipka attended that show as well with a similar hairstyle. It seems, however, that the actor may have darkened up the bottom of her hair since then and taken off an inch or two in length. The result is an ultra-chic bob in a style that's very Shipka but maybe not very Sabrina.

Regardless of whether or not Shipka actually has darkened and cut a few inches off her hair, the actor looks gorgeous as she walks the 2019 MTV Movie & TV Award red carpet with her costars. From the on-trend midi-length Fendi dress she rocking to the neon detailing on her heels, Shipka's look is definitely one of the best of the night. The best part? She didn't even need witchcraft to look that good.