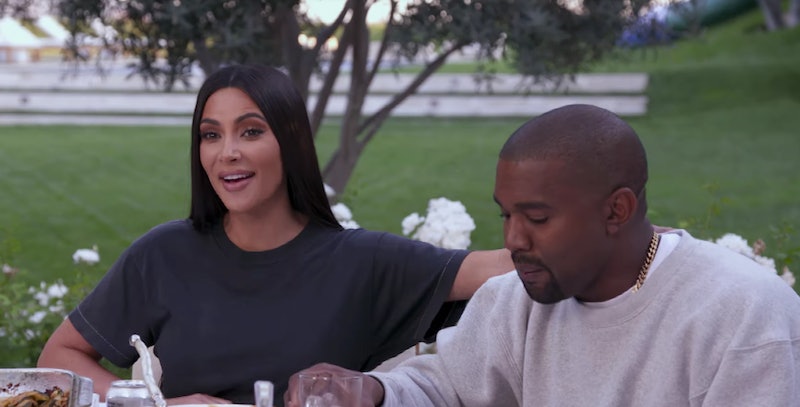 Scott Disick may not have known that his in-laws were expecting a third child back in September 2017, but this time around, Kim Kardashian is making sure that everyone knows there's a new bundle of joy on the way. The new trailer for Season 16 of Keeping Up With the Kardashians, released on Feb. 8, kicked off with the exciting announcement that Kardashian and her husband, Kanye West, are expecting their fourth child via surrogate.

"We have an announcement to make," Kardashian says at a dinner that includes her mother, Kris Jenner, and of course, Scott Disick. "We're having a baby!" The happy news sends the family into cheers of delight and excitement — which is a much happier reaction than the one Kardashian got when she finally told Disick that she and Kanye were expecting baby Chicago in 2017. (The confused reality star admitted that he hadn't heard that Kardashian and West were expecting, and only found out while helping her decorate the nursery.)

In addition to confirming the big news in the KUWTK trailer, Kim also opened up about her growing family during a recent appearance on The Tonight Show Starring Jimmy Fallon. "I was kind of stressing," she told host Jimmy Fallon about the decision to welcome a fourth baby. "My house is so full [but] I heard that parents of four are the most enlightened and calm of all parents."

"I felt the huge change — from 1 [child] to 2," Kardashian said of welcoming son Saint in December 2016. "That was harder than [going from] 2 to 3" kids, she explained. Thankfully, the reality star also told Fallon that her eldest daughter, North, 5, was finally embracing her role as a big sister, after years of struggling to get along with her little brother. "Saint and North are finally getting along," the soon-to-be mother of four gushed.

Despite the Kardashian-West family's happy news, the KUWTK trailer seems to imply that there's still plenty of drama headed their way. After their big announcement, Kardashian is shown dealing with the fallout from West's multiple rap feuds this year, which included public spats with Travis Scott and Drake. "Kanye's friends always publicly talk sh*t about him," she says on the phone at one point, before another shot of her telling her rapper husband that "I don't got love" for whoever is doing the supposed feuding.

Of course, the Kardashian-Wests aren't the only ones dealing with family drama; based on the trailer, it seems as if Season 16 will feature Khloé Kardashian fighting with her sisters over the amount of time she spends with them. During one point in the clip, an upset Khloé declares at a meal with her family, "I could be selfish and spend all the time with me and my daughter. I don't even have to be here!" before storming out.

The previous season of KUWTK chronicled Khloé and her family dealing with the cheating allegations that surrounded boyfriend Tristan Thompson in the days before she gave birth to daughter True in April. "I wanted to have a beautiful birthing experience for myself and for the memories of what I choose to share with True when she’s older," Khloé tweeted about the emotional experience of reliving the scandal all over again when the episodes aired in November. "I want her to have videos and pictures of her daddy there, holding her etc. I want her to know she is LOVE and my happiness! Babies feel energy!"

She continued, "I chose to put my feelings aside for the birth and to try and have as much positive energy that I could. My only thought was about the birth of my daughter. I wasn’t going to let ANYONE disrupt anything less than what she deserved."

While Khloé spent the holidays with Thompson and the couple appeared to be working through their issues, the Good American founder has shared plenty of cryptic social media posts that hinted at remaining difficulties in their relationship. It's possible that those issues could come to the forefront in the new season of KUWTK, causing plenty of tension between Khloé and the rest of the Kardashians. Unfortunately, fans will have to wait until new episodes premiere on March 31 to experience the drama first hand.