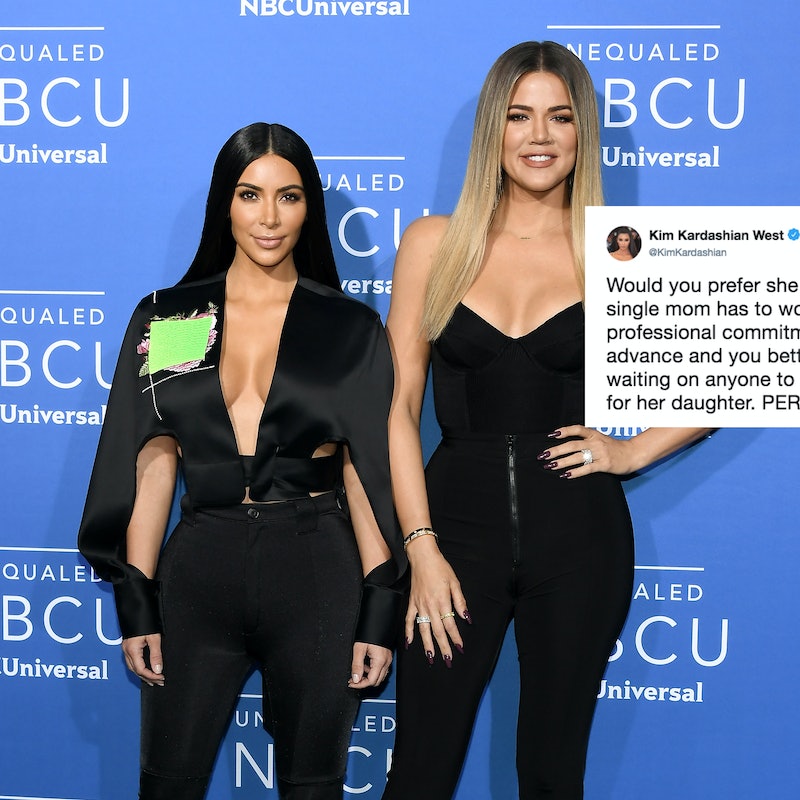 If you've been keeping up with the Kardashian family lately, you already know that there's been some drama brewing around the crew. And in light of the new cheating accusations surrounding Tristan Thompson, Khloé Kardashian has dealt with some unfair criticism relating to a recent work commitment — but leave it to her sister to have her back. Kim Kardashian defended Khloé on Twitter against those critics, and she had a strong message for all of the haters.

On Feb. 21, Kim took to Twitter to defend her sister after one user tweeted their thoughts about Khloé's recent outing with BFF Malika Haqq. In reference to her attendance at PrettyLittleThing's Los Angeles store opening on Feb. 20, the user captioned a video featuring the Revenge Body star's outing, "If someone cheated on your publicly. Y'all going outside the next day?"

To quickly recap, they're referencing reports from sources, such as TMZ and Hollywood Unlocked, which claim Thompson cheated on his girlfriend with Kylie Jenner's BFF Jordyn Woods. The couple reportedly split following the allegations. (Bustle previously reached out to reps for Kardashian, Woods, and Thompson, but did not hear back.)

Kim obviously didn't appreciate that negative comment. She replied to the tweet and defended her younger sister by (accurately) saying that Khloé shouldn't have to lose out on opportunities just because of this stressful situation. She wrote:

"Would you prefer she lose the [money bag] too? A single mom has to work too boo! This was a professional commitment planned far in advance and you better believe she is not waiting on anyone to pay her bills or provide for her daughter. PERDIODT!!!"

This isn't the first time that Kim has shown her support for Khloé during this scandal. According to TMZ, the KKW Beauty mogul has unfollowed both Thompson and Woods on Instagram. The publication mentioned that while the Revenge Body star hasn't taken a note from her sister and unfollowed the pair yet, she has deleted many recent photos of herself and her ex-boyfriend on her Instagram.

Kim pulled a similar move when it was reported that Thompson had cheated on Khloé in early April 2018. Publications such as TMZ and the Daily Mail broke the news last year that the Cleveland Cavaliers player had reportedly cheated on his then-pregnant girlfriend, as he was seen getting close to multiple women. At the time, Kim responded to the accusations by unfollowing Thompson on Instagram (and by calling the situation "so f*cked up on The Ellen DeGeneres Show in late April).

As of right now, it appears that Kim, and Khloé's BFF Haqq, aren't only supporting Khloé by pulling some telling moves on social media. They're also supporting her IRL. As seen on Kim's Instagram Story on Thursday, it appears that the three ladies are on a "girls' trip." Interestingly enough, the crew can be heard jamming along to Brandy's "Who Is She 2 U," and more specifically, the lyrics, "Don't lie to me / Who is she to you? / My eyes can see." Given the recent cheating claims, it's definitely telling that the group chose to listen to this particular song during their getaway.

Whether it be through a strongly worded (and incredibly on point) Twitter message or a very telling jam session, it's clear that the Kardashian family will always be there for one another when things get tough.