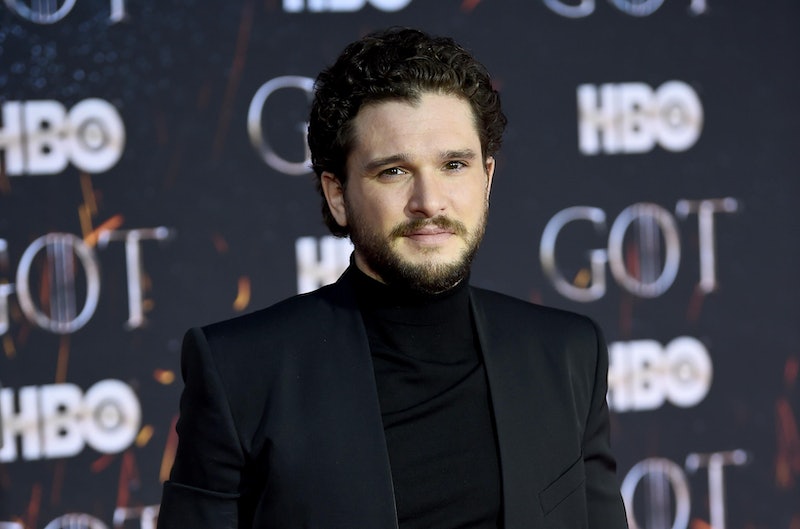 With the final season of Game Of Thrones premiering just a week after his Saturday Night Live debut, there was no way that Kit Harington's SNL monologue wasn't going to mention his career-making role as Jon Snow. But viewers may have been surprised that he brought along some fellow Game of Thrones actors for a cameo at the beginning of the show.

The "audience question" format is pretty standard for a Saturday Night Live monologue, but usually, the SNL audience isn't filled with the cast of television's most talked about show. Harington was first interrupted by the Mother of Dragons herself, Emilia Clarke. She asked him how Game Of Thrones ends, since she'd apparently forgotten what happens on the show, and most of her scenes involve her talking to a "tennis ball on a green screen" anyway. This was followed by an appearance by John Bradley, who portrays Jon Snow's bestie Samwell Tarly. Bradley asked one of the only questions harder for Harington to answer than how Game Of Thrones ends — whether or not he'll still be best friends with Bradley after the show ends. Although, Bradley was also curious about the show's ending, as the only two pages of script he was given apparently involve Samwell screaming after a dragon opens their mouth — not promising.

The cameos reached a climax when Harington's IRL wife Rose Leslie, who played Ygritte on Game of Thrones and currently plays Maia Rendell on The Good Fight, was uninterested in the end of the show as she's "not a nerd." She instead asked, "What are we going to do for money?" and explained that Harington's ego had been inflated by being named King Of The North, which led to the couple ordering UberEats every night. Harington ended the monologue by declaring that "Tyrion Is The Night King," which — as far as fake spoilers go — doesn't hold a candle to some of fan's weirdest theories.

Game Of Thrones references naturally pervaded the rest of the episode, including a joke about Game Of Thrones-themed Oreos during Weekend Update, and a sketch that introduced a variety of possible spinoffs and sequels, including GOT: SVU, for which the show recruited Mariska Hargitay and Ice-T to play Westeros versions of their Law & Order: SVU roles. When not explicitly mentioning Game Of Thrones, a running-theme on the show seemed to be making fun of nerd culture as a whole, including a sketch portraying Harington as a Dungeons & Dragons-obsessed graphic designer and a character in a VR game-gone-petty.

With Harington's star-making role coming to an end, he may not have another project that will bring him to the SNL stage right away (he admitted during his monologue that his other projects, like the films Pompeii and Silent Hill: Revelation aren't as high-profile), but he took his opportunity as host to prove that he's got the comedic chops to do so again if and when the time comes. Perhaps he'll even do a comedy movie next. After spending so many bleak years in Westeros, he could certainly use a few laughs.