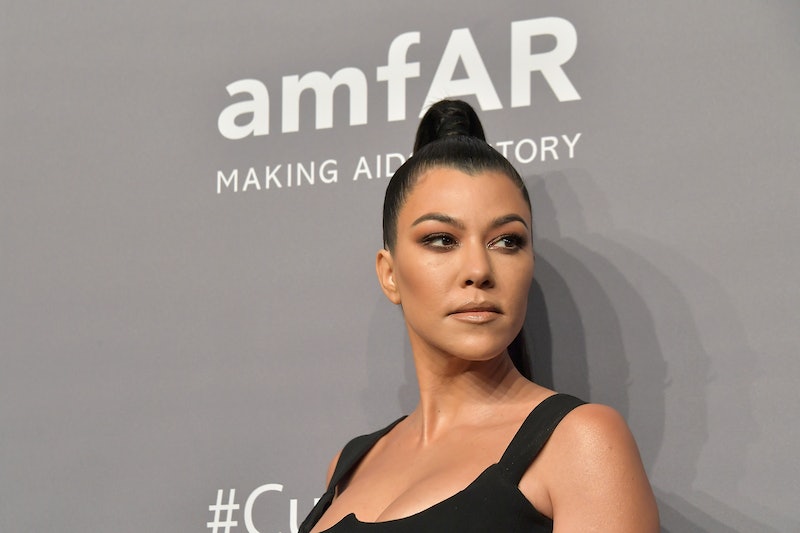 Ariana Grande officially has the most adorable fan group in Hollywood. On Friday, May 10, Kourtney Kardashian shared sweet photos of Penelope and North at an Ariana Grande concert, where the super stylish preschoolers showed off their fiercest outfits and enjoyed the singer's Sweetener World Tour. The cousins' fun night out was the same day that North became a big sister for the third time, as Kim Kardashian and Kanye West welcomed their fourth child, a boy, on Friday morning.

Despite the exciting new addition to the family, the girls' night out was all about North and Penelope, with Kourtney revealing that the pair were out "past our bedtime" on her Instagram Story. In an adorable photo of the pair, North — rocking an iridescent purple top and pants and a faux fur coat — lounges on a couch with her cousin, who is wearing a Grande-appropriate pink snakeskin mini dress and matching pink boots. Kourtney also shared three videos of Grande singing "R.E.M." onstage, tagging the singer in her posts.

This isn't the first time that Kourtney and her family have shared their love of Grande and her music on social media. The Poosh founder actually dressed as the singer for Halloween, wearing a similar pink baby doll dress and over-the-knee boots to the ones that Grande wore to perform "No Tears Left To Cry" on The Tonight Show Starring Jimmy Fallon in May 2018.

Grande will also make her debut appearance on Keeping Up With the Kardashians, as Sunday's episode will chronicle Kris Jenner's scene-stealing appearance as Regina George's "cool mom" in the "Thank U, Next" video. On Wednesday, May 8, E! released a clip of Kris telling her daughter, Kendall, that Grande had asked the matriarch to be in her new music video, though she couldn't quite remember what the song was called.

"I got a call from Ariana Grande's team and they asked me if I would be interested in being apart of her new video, and of course I said yes," Kris explained during her on-air confessional, before revealing that she is a massive fan of Grande's music. "I am one of Ariana Grande’s superfans," she revealed. "I met her years ago. I am so proud of her and her journey. She’s such a successful artist and so talented, and gosh, she’s terrific."

A few days later, the network shared another clip from the episode, featuring Grande and Kris meeting behind the scenes of the video, in which the singer actually revealed that she wore a Kylie Cosmetics liquid lipstick in the video. “This is the first time I’ve ever been in a professional music video with an iconic artist and someone I admire very much,” Kris said during a confessional interview. "I don't want to let Ariana down. No, no, no." (Grande, meanwhile, was just thrilled to be "making my Keeping Up With the Kardashians" debut, and encouraged Kris to just have fun with it.)

Grande wasn't the only one thrilled to see Kris make her music video debut as the ultimate "cool mom"; Kim gushed about her mom's performance to Refinery29, revealing that she was actually on FaceTime with Kris while shooting. "She was definitely meant for that role," Kim confessed in December 2018. "I was actually on FaceTime with Scooter Braun [Grande's manage] when they were shooting that scene. So I was watching it in real time, and I was literally crying. I was like, crying watching her."

”I talked to her right after and just told her that was the most amazing thing ever," Kim added. "She said she was actually so nervous because she had no idea what she was really getting herself into, and like dancing and stuff."

Sure, the Kardashian-Jenner family is pretty big, but something tells us that if Grande wanted to become an official member of the famous family, everyone involved would be on board.