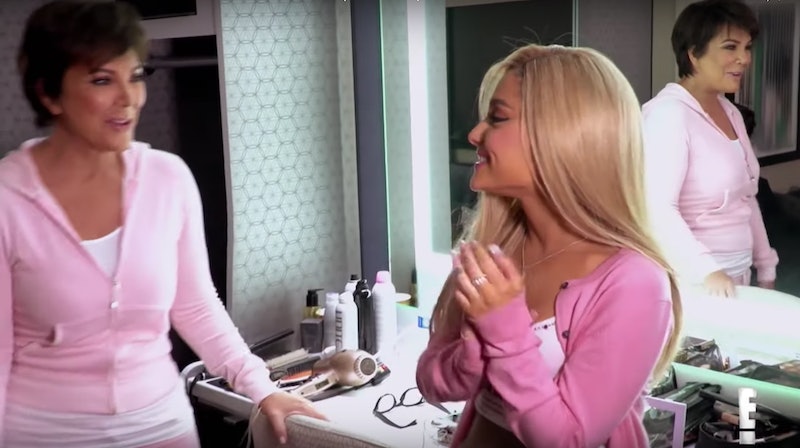 Keeping Up With The Kardashians/YouTube
By Kristie Rohwedder
May 10, 2019

Thank u, next Keeping Up with the Kardashians episode. On Thursday, May 9, E! released another fresh teaser for this Sunday’s ep that will treat Arianators and Kardashianators oh-so right. In the latest preview, we get to see Ariana Grande make her KUWTK debut. Yes, Ariana Grande is in the upcoming episode. Not via FaceTime. Not via speakerphone. She is literally in a dressing room with Kris Jenner while KUWTK cameras are literally present.

This snippet comes just one day after E! shared a clip from this Sunday's episode in which Kris tells Kendall Jenner that she will play "one of the moms from Mean Girls" in the music video for "Thank U, Next." The mom from Mean Girls is who Kris had been asked to play is, but of course, Regina George's mother.

You've surely seen the music video by now, but just in case it somehow slipped past your radar: The "Thank U, Next" music video pays homage to four beloved '00s rom-coms, one of which is Mean Girls. And during the Mean Girls segment, Kris gives us her finest "Mrs. George at the North Shore High Winter Talent Show" impression.

But before she could film her instantly iconic scene, Kris had to get in hair, makeup, and costume. And while she was getting ready, Grande paid her a little visit. And lucky us, the KUWTK crew was there to capture this wonderful moment.

There is a lot to love about this preview. Grande letting Kris know she is wearing one of the lipsticks from Kylie Jenner’s makeup line? Great. Kris letting Grande know that the lipstick will stay put “for weeks?” Very here for it. Grande letting Kris know she is free to freestyle during her segment? Gorgeous. Grande and Kris rehearsing the Mrs. George choreography in the mirror together? Could not be more on board. Grande telling everyone in Kris's dressing room that she is "so excited to be making [her] Keeping Up with the Kardashians debut"? What a beautiful fourth wall break.

“This is the first time I’ve ever been in a professional music video with an iconic artist and someone I admire very much,” Kris tells us in a talking head. "I don't want to let Ariana down. No, no, no."

"Thank U, Next" may be her first professional music video, but it is not her first music video rodeo. In the year 1985, Kris created a music video for “I Love My Friends," her 30th birthday song/ode to her pals that is set to the tune of Randy Newman's "I Love L.A."

Oh, spoiler alert: When it came to film her first professional music video, Kris crushed it. As "Thank U, Next" director Hannah Lux Davis told Entertainment Weekly, "She was fantastic." Davis went on to say it was "cool to see her in action" and that it was "really fun to be around her and her energy." Oh, and Kris "was dancing and in it" from her very first take.

I'm so *bleepin'* grateful for this Momager.