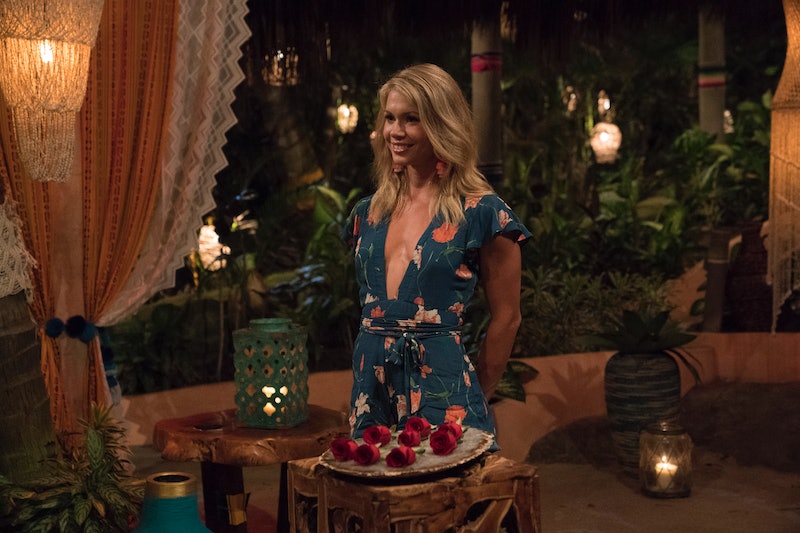 Krystal Nielson has strong words for anyone who's mocked her decision to participate in Bachelor in Paradise. The fitness coach shared an emotional Instagram post on Wednesday, explaining her decision to participate in the show this past summer, as well as the effects filming The Bachelor had on her. Krystal's defense of her time on Bachelor in Paradise makes so much sense, and it will remind fans not to be so quick to judge.

In her post, Krystal explained that she was mistakenly included on a group Facebook message in which a former client wrote about her, "OMG Paradise?!!! Hasn't she taken enough of a beating already?" Krystal noted that she actually "really liked" the client," prior to accidentally seeing the message. She then went on to explain why she was determined to pursue her own "bright future," even after being deemed a villain while competing on The Bachelor.

Krystal also revealed in the post that before Arie's season of The Bachelor aired, she was hospitalized because of the "anxiety and fear" she felt about the season. She wrote in her post,

"I was even hospitalized last November because of the DEBILITATING EFFECTS OF ANXIETY AND FEAR I was facing with the upcoming season of The Bachelor. I had zero income and now a $12,000 hospital bill that I chose to ignore because I couldn't emotionally 'deal' and it was sent to collections DAMAGING my credit."

So even though Krystal still had her work as a fitness trainer prior to The Bachelor, she also had a hospital bill that ended up costing her thousands of dollars out of pocket. Krystal wrote that after the bill was sent to collections, she had "no money, no savings, no more good credit." But instead of backing down, Krystal made the decision to keep pursuing her own happiness, even through the monetary struggles.

"I knew deep down in my heart that SERVITUDE NOT MONEY needed to be my sole focus," Krystal wrote in the beginning of her post. It sounds like she wanted to focus on herself and her future by going on Paradise, overcoming the anxiety she apparently felt after filming Arie's season of The Bachelor.

Of course, Bachelor fans will know that Krystal's decision definitely worked in her favor. She and Chris became one of Paradise's strongest couples, and they're now happily engaged and recently moved in together. Krystal dealt with her own anxiety, as well as the negativity she faced from her client and other people, to find love with her fiancé.

Krystal's message is also a moving reminder that it's OK not to have everything figured out by a certain age. She's been open about her family's struggles and her brother's homelessness in the past. And with her new post, Krystal is reminding fans that even if someone appears to have their life all figured out, they might be struggling with something most people don't know about, like her hospitalization and the bill she faced after it.

The Paradise star's Instagram is inspiring for anyone who may be in a career rut or who might be thinking they haven't hit all the milestones they "should" have at that point. Krystal's post will remind fans not to be so hard on themselves. And sometimes going out of your comfort zone and putting yourself first, as she did by going on Paradise, can make all the difference.