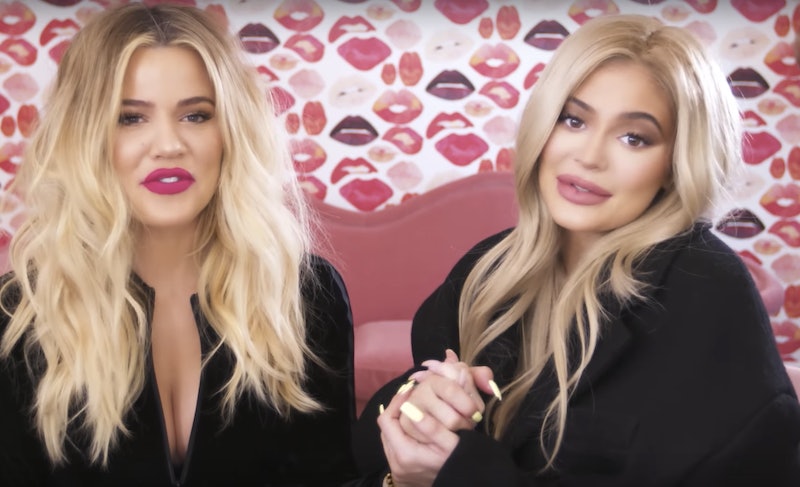 If you've been playing detective, trying to find out the truth about all those Kardashian-Jenner family pregnancy rumors, your job may have gotten a whole lot easier. To promote the In Love With The Koko Kollection from Kylie Cosmetics, the sisters recorded a video. And this Kylie Jenner and Khloé Kardashian video teases the baby rumors more than ever before. It may honestly be the most straightforward clue of all.

Near the end of the five-minute clip, Khloé says, "We created them. It's our baby together." She's clearly referring to the lip kits, since she then adds, "We have eight," and there are eight shades. But then, Kylie adds, "We have so many babies. Who knew?" Khloé adds, "Who knew?" and the pair raises their eyebrows and starts to laugh.

It surely seems like a nod to the ongoing pregnancy rumors surrounding the famous family. Khloé is reportedly expecting her first child with boyfriend Tristan Thompson. (When the baby news first broke, Bustle reached out to Khloé's rep, as well as Thompson's agent, but did not receive an immediate response.) Meanwhile, it was reported just before that that Kylie is having a baby with boyfriend Travis Scott. (Scott's rep did not respond to Bustle's request for comment; reps for Jenner could not be reached.)

Neither of the sisters has confirmed that they actually have a baby on the way, but they also haven't denied the rumors either. And the two apparently couldn't be more in-sync — Kylie's rumored baby is due in February, and Khloé is reportedly due near then as well, according to People. People's source claimed, "Kylie is over the moon about her pregnancy. Khloé and Kylie are both due around the same time. They are approximately four months along."

Fans have speculated that Kylie's been teasing clues about the baby news on social media. These hints range from a Snapchat video captioned, "Nothing's gonna hurt you baby" (lyrics from a song by Cigarettes After Sex), to wearing an over-sized blue shirt after previously teasing she liked the color blue more than pink. (This was interpreted to be a reference to the rumored baby-to-be's gender.)

Regardless, the new lip kit video may be the direct hint yet. They don't quite confirm the baby news, but they're clearly making a reference to it — at least that's what fans believe. Comments on YouTube range from, "When they say they have so many babies...﻿" to "Subliminal messages wink wink﻿." Another wrote, "DAT BABY REFERENCE AT 4:30 THO﻿."

Even if they are just messing with fans, there are indeed plenty of babies in the Kardashian-Jenner family already. As Kim Kardashian confirmed in a recent Keeping Up With The Kardashians trailer, she and Kanye are expecting their third child via surrogate. They already have two kids, North and Saint West. Meanwhile, Kourtney Kardashian, who tweeted on Tuesday to confirm she is not currently pregnant, is a mother of three. She and Scott Disick have Mason, Penelope, and Reign. Let's not forget about Rob Kardashian's daughter Dream either.

Interestingly enough, in early September, Kim may have hinted at the baby rumors with a picture of herself, Khloé, and Kylie by the pool with a seemingly cryptic caption. She wrote, "The 3 of us..." and you know nearly every move from this family is calculated, right down to the Insta captions.

At this rate, it's unclear whether Khloé or Kylie will officially confirm their baby news anytime soon, or just keep letting fans speculate. But if you look closely enough at their social media updates (yes, this YouTube video included), the clues just seem to keep lining up.

More like this
Kylie Jenner Shares A New Photo Of Her Son With Travis Scott For Father's Day
By Jake Viswanath
The Kylie (Minogue VS. Jenner) Lawsuit, Explained
By Sophie McEvoy
Kendall Jenner & Devin Booker Reportedly Broke Up After 2 Years Of Dating
By Jordyn Tilchen
Justin & Hailey Bieber's Bond Is "Unbreakable" Amid His Ramsay Hunt Diagnosis
By Bustle Editors
Get Even More From Bustle — Sign Up For The Newsletter