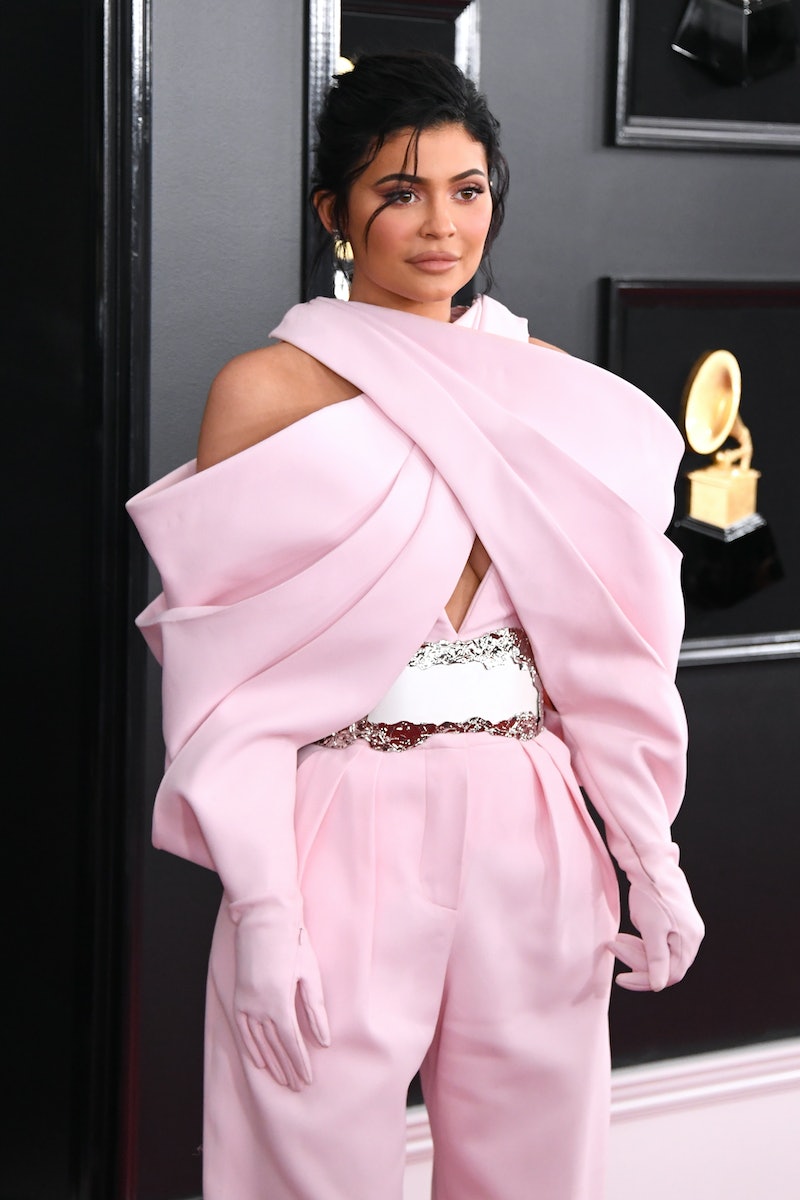 When it comes to tough times, the Kardashian-Jenner family sometimes takes a step back from the spotlight. According to a Wednesday report from Us Weekly, Kylie Jenner stopped filming Keeping Up With the Kardashians following the Jordyn Woods and Tristan Thompson cheating scandal. A source told the publication that the entire ordeal reportedly took a toll on Kylie. Bustle has reached out to Kylie's reps for comment, but didn't receive an immediate response.

"Kylie took a little break from filming Keeping Up With the Kardashians, and recently got back into filming and it's been a struggle and difficult," Us Weekly's source claimed. "She was very upset about the situation with Jordyn and also just didn’t want to deal with it and have to address it."

It remains unclear if Kylie really did stop filming the E! reality series, but based on the new Season 16 trailer for KUWTK, it appears the rumors involving Woods and Thompson will be addressed. As you can watch for yourself below, there are moments where Khloé Kardashian is seen wiping away tears and extremely upset.

At one point, she declares, "It just sucks that it has to be so public. I'm not just a TV show. Like, this is my life." If that isn't enough, at one point Kardashian screams, "My family was ruined." The Revenge Body star also mentions Thompson by name and says, "Tristan might love me, whatever that means. He has no respect for me whatsoever."

In the promo, there's even a moment in which Kris Jenner makes a toast to Kylie and Woods. Kylie is also heard saying in the trailer, "I just hope that there's a light at the end of this tunnel, but I don't see it right now." To what she's referring isn't made clear.

On Feb. 19, TMZ and Hollywood Unlocked both reported that Thompson had cheated on Kardashian with Woods at a Los Angeles party. After the rumors made headlines, Kardashian and Thompson's breakup was confirmed. (Bustle previously reached out to reps for Woods, Kardashian, and Thompson for comment on the situation, but has not heard back.)

The professional basketball player hasn't directly addressed the Woods situation, except for E! News reporting on Feb. 19 that Thompson responded to TMZ's cheating claim by tweeting and deleting a post reading, "FAKE NEWS."

As for Woods, she did an interview with Jada Pinkett Smith on Red Table Talk on March 1. During their conversation, Woods claimed she and Thompson never shared "anything intimate" and the two had "never" slept together. That said, Woods claimed the NBA star kissed her when she left his house. "On the way out, he did kiss me... no passion, no nothing, it was a kiss on the lips, no tongue kiss, no making out," Woods said. (Bustle previously reached out to Thompson's agent about Woods' Red Table Talk comments, but did not receive an immediate response.)

In response to Woods' interview, Kardashian tweeted on March 1,

"Why are you lying @jordynwoods ?? If you’re going to try and save yourself by going public, INSTEAD OF CALLING ME PRIVATELY TO APOLOGIZE FIRST, at least be HONEST about your story. BTW, You ARE the reason my family broke up!"

"Tristan is equally to blame but Tristan is the father of my child. Regardless of what he does to me I won’t do that to my daughter. He has been addressing this situation PRIVATELY. If Tristan were to lie publicly about what conspired,then yes I would address him publicly as well."

Whether or not Kylie really did stop filming KUWTK, there's no denying the entire situation involving her sister, Woods, and Thompson has understandably taken an emotional toll on the family. At this time, Kylie hasn't publicly commented on the situation at all, and it's unclear where she and Woods currently stand.