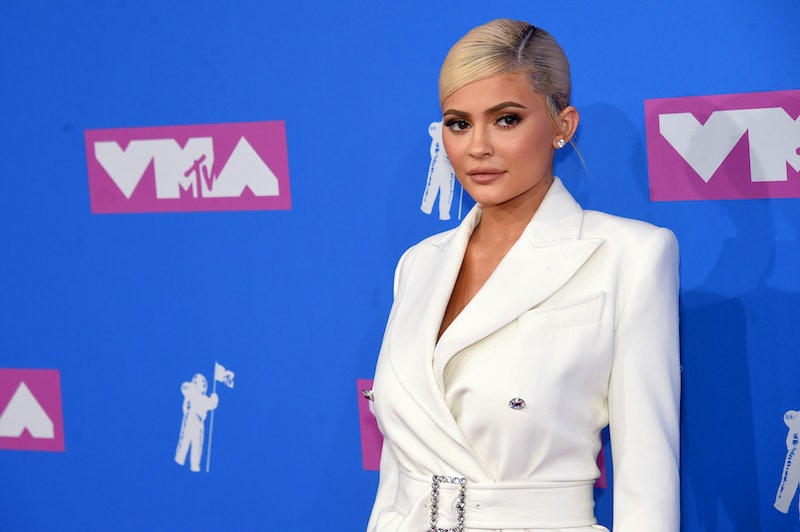 It's hard to believe that the three youngest Kardashian cousins are all almost one (True Thompson's first birthday isn't until April). But Kylie Jenner's new Instagram Story of Stormi and Chicago shows just how fast the trio that the Kardashian-Jenner family have dubbed "triplets" is growing up. In Kylie's new video, her daughter, Stormi, and her sister Kim Kardashian's daughter, Chicago, are walking — yes, walking — around a kitchen playing with a can of Campbell's soup and a can of artichoke hearts. Jenner is bemused that the kids are more entertained by canned goods than their toys, but, hey, toddlers are notorious for playing with everything but their toys. It's nice to know the Kar-Jenner kiddos are no different.

"All these toys, girls, and you wanna play with the Campbell's soup and artichoke hearts," Kylie says in the video. In response, Chicago and Stormi toddle off in different directions. At this point, the makeup mogul tells them, "OK, bye!" But the girls don't let her get the last word in, instead, one of the toddlers replies, "Bye!" It's all kinds of perfect.

The only thing that would make the video better is if True was there crawling after them. Don't feel too bad for the third "triplet" — according to Khloé Kardashian's Instagram, she and little True are enjoying a beach day. While the youngest member of the trio would no doubt love to be playing with her cousins and their canned goods, chilling in a lounge chair with her shades on is a good second option.

Kylie seems to be having as hard of a time accepting that her daughter and nieces are growing up as the Kardashian-Jenner fans are. In the corner of the video, she wrote, "i still can't get over that they're only two weeks apart." Stormi and Chicago truly have grown up side by side over the past year. Both girls recently celebrated birthdays, with Chicago having an Alice in Wonderland-themed bash in mid-January, while February baby Stormi had a more low-key celebration as her dad, Travis Scott, prepared to perform at the Super Bowl halftime show.

It's amazing to see how bonded the cousins are — being born so close together has definitely given the trio a special relationship.

In a few months they will have to cede their title as the youngest members of the Kardashian-Jenner clan over to the newest member of the family. Kim and Kanye West recently announced their fourth child is on the way via surrogate. That means the "triplets" might soon be upgraded to the "quadruplets" as Kim and Kanye welcome another baby to their growing family.

For now, the three little girls seem to be making the most of their status as the babies of the group. And that includes wowing the world with their adorable milestones. In just a few months, Stormi and Chicago have gone from crawling and baby babbles to walking and talking (at least a little). And True's not far behind them.

If Kylie's latest video is any indication, their toddler years are going to be just as much fun as those sweet baby days. And it's going to be a blast to see these little ones continue to grow, learn, and make mischief together.