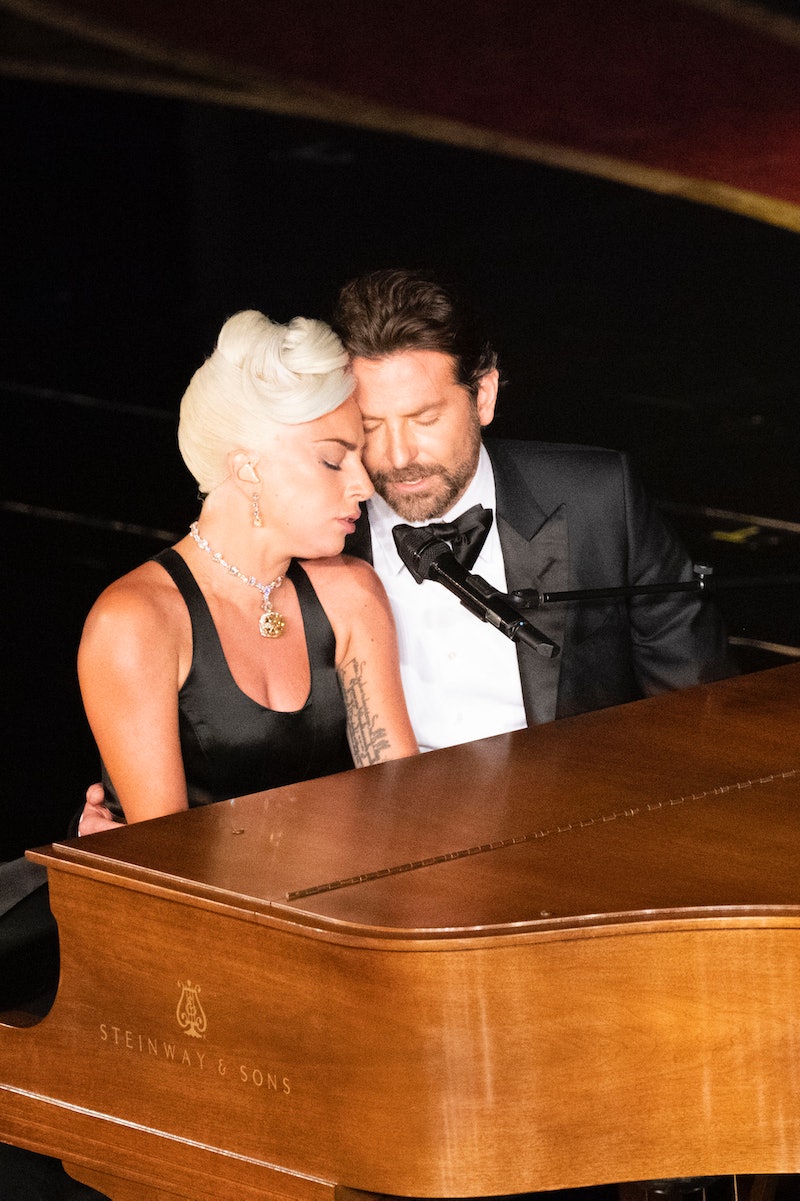 People who were hoping that Lady Gaga and Bradley Cooper would end up together in real life, just like their onscreen counterparts in A Star Is Born, have just been served with a major reality check. Lady Gaga and Bradley Cooper's incredible chemistry during their Oscars performance was all just really good acting, as she told none other than Oprah Winfrey in a new interview for Elle, published on Wednesday, Nov. 6.

As fans will recall, rumors that Gaga and her Star Is Born director and co-star were in an actual romanic relationship quickly sprung after their now-infamous Oscars performance in February 2019. And the rumors were even more intensified with the news that Gaga had recently split up with her then-fiancé Christian Carino, and then came back again when Cooper broke up with his longtime girlfriend Irina Shayk in June 2019.

"Quite frankly, I think the press is very silly," she told Winfrey about the rumors. "I mean, we made a love story. For me, as a performer and as an actress, of course we wanted people to believe that we were in love." Winfrey relayed to Gaga that Cooper said he wouldn't have been able to look her in the eyes during the Oscars performance if the rumors about them were true, and Gaga agreed, explaining that their amazing chemistry was designed to look as heated as it did.

"We wanted people to feel that love at the Oscars," she said. "We wanted it to go right through the lens of that camera and to every television that it was being watched on. And we worked hard on it, we worked for days. We mapped the whole thing out—it was orchestrated as a performance."

Gaga previously shut down romance speculation right after the Oscars during an appearance on Jimmy Kimmel Live!. When host Jimmy Kimmel asked her about the rumors, the singer immediately responded with a huge eye-roll. “First of all, social media, quite frankly, is the toilet of the Internet. And what it has done to pop culture is abysmal," she said. "And people saw love, and guess what, that’s what we wanted you to see.”

She then explained that they wanted the intense love story from A Star Is Born and its defining hit "Shallow" to translate to the stage. “From a performance perspective, it was so important to both of us that we were connected the entire time," she said. "Look, I’ve had my arms wrapped around Tony Bennett for three years touring the world. When you’re singing love songs, that’s what you want people to feel.”

Although the romance rumors sound slightly ridiculous at this point, between the Oscars performance and his appearance during her Las Vegas show Enigma, it's evident that Gaga and Cooper have a chemistry that goes beyond just acting.

More like this
North West Has Mastered The Wednesday Addams & Lady Gaga TikTok Dance
By Jake Viswanath
The 'Love, Lizzo' Harry Styles Scene Is Just 1 Moment That Made Fans Feel Seen
By Brad Witter
Yes, That's Lindsay Lohan's Sister Singing In The 'Falling For Christmas' Movie
By Radhika Menon
This James Bond Event At Abbey Road Studios Was A 007 Fan's Dream
By Samantha Rollins
Get Even More From Bustle — Sign Up For The Newsletter