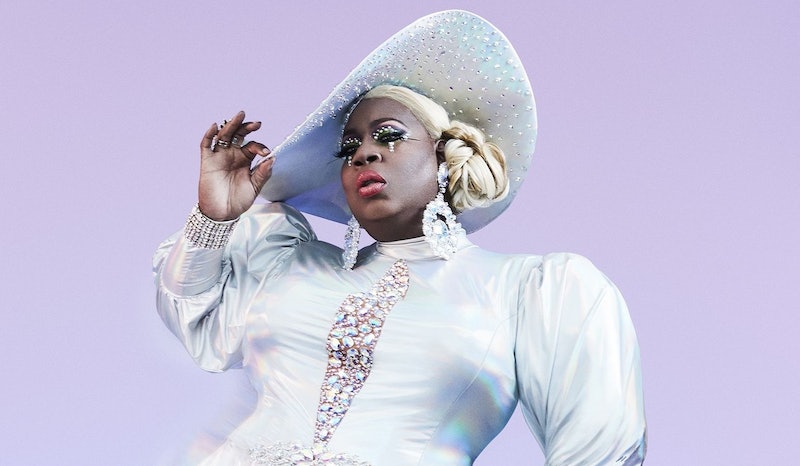 The fourth time could be the charm. No, that's not how the saying goes, but in the name of Latrice Royale's return to All Stars 4, it is gobsmackingly accurate. Last week's cliffhanger gave our four eliminated queens a shot at revenge and redemption, snd in the first-ever LalapaRuza lip-sync battle, the large and in-charge, bold and beautiful Latrice Royale summoned both. She has officially made her fourth comeback to Drag Race, and this time, she's not leaving without a crown.

This journey has been entertaining, to be sure, but it ultimately felt like the culmination of a long, dramatized plan just to bring Latrice back, rather than a means to (fairly) mix up the competition. Ru made no mistake by allowing the eliminated queens "in reverse elimination order" to choose their all-star lip-sync competitors. Because she was nixed most recently, that gave Latrice the most leverage. It came as no surprise when she chose to compete against Monique Heart, the queen who had the audacity to send her home in the first place.

Latrice made it clear that she was convinced Monique chose to send her home over Monèt out of loyalty to their Season 10 sisterhood. Monique insisted that their friendship didn't affect her decision, and that she chose to keep Monèt simply because she had a better report card. Monique's justification really didn't matter, though, because there were no official rules dictating her decision — until now.

Prior to the beginning of LalapaRuza, Ru announced the temporary suspension of All Star rules, which reinstated him with the decision-making power. In hindsight, though, it didn't matter either way; he seems to know everyone's fate from the get-go.

Nonetheless, the lip-sync battles went on. The first three resulted in landslide wins by the all-stars. It's almost as if the returning queens intentionally put on a losing show — like they knew they were just props for Latrice's resurrection, and they were OK with it.

Jasmine Masters attempted to raise Trinity the Tuck's famous cheek-quaking dance moves, but she was definitely bluffing. Gia Gunn didn't know the words to Ru's "Adrenaline," and Farrah Moan hid behind her long platinum locks during most of "Kitty Girl" while her opponent, Valentina, made her routine look looked flawlessly choreographed. Meanwhile, thanks to last week's win, Manila Luzon and Monèt X Change clutched their immunity with relief from the back of the stage.

Monique and Latrice were, unsurprisingly, saved for last, and their lip-sync felt like more of a joint performance than a battle. They moved together, the camera always on them both, and they both even revealed new wigs halfway through their set. Not to mention, Monique just happened to choose the suitcase that contained "Sissy That Walk" for their backtrack — one of Ru's most iconic singles, and definitely grand finale material.

When all of the drama and flashing lights are set aside, however, the LalapaRuza comes across as a plan to correct what Ru must've seen as Monique's mistake — sending Latrice home. Most Drag Race fans probably don't disagree that a legend like Latrice has a right to be there, but you can't help but wonder what the overarching narrative says about who would've went home if Latrice didn't.

Does it discredit Monèt's success? Monèt is no tenured queen — she is no Latrice Royale — but she has perhaps shown the most growth within one year. She is Season 10's Miss Congeniality and she fought like hell to be there. The judges have shorted her in the past (see: Season 10, Episode 9's Silver Foxy-themed runway), and she doesn't deserve to be overshadowed again, not even by Latrice.

When Valentina asked the group what this week's temporary rule suspension meant, Latrice was, funnily enough, the first to answer. "That means that the way we was doing it, we were f*cking it up," she said. "And they ain't having it." Sounds about right.

If the ultimate goal was to bring back Latrice, the first-ever LalapaRuza casts a shallow and wasteful shadow on the season. Still, it was entertaining — "the gay Super Bowl," as Monique called it. Like you heard nearly all the queens say in one variation or another, the twist was gag-worthy — so much so, that if you were to take a shot every time you heard that phrase, you'd be sloshed by the first commercial break. And if Latrice doesn't win All Stars 4 now, she at least deserves a crown for pulling off that comeback.