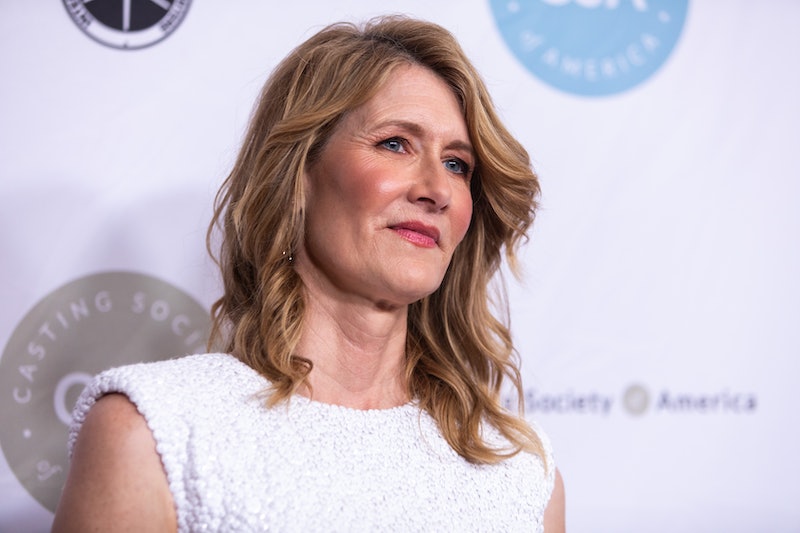 Tuesday, April 2 marks 2019's Equal Pay Day — the day that indicates when women's salaries "catch up" to men's salaries earned for the previous year. That means, given the current overall gender wage gap, women worked an extra 92 days to earn the same amount as men did in 2018 — a staggering number, but one that doesn't even fully account for the larger gaps that women of color, older women, trans women, and women in a range of other groups experience. To mark this occasion, equal pay advocate and actor Laura Dern executive produced energy nut brand NUT-trition's campaign to shine a light on the gender wage gap and help bring the issue to the forefront in a creative way. As part of that partnership, Dern spoke with Bustle over the phone about her experiences with the wage gap, how the culture surrounding it is changing, and why the issue is close to her heart.

"As women, watching the numbers crawl from when our mothers were going through this and what we're doing now... the numbers have not changed. There's been a 20 percent difference [in pay] for at least the last 10 or 15 years," Dern tells Bustle. "In my experience, and in my industry, that difference can be 80 percent from what the male lead in a film will be paid compared to the female lead — for the same work, or perhaps more work."

Dern's acting career is a lengthy and prominent one, with roles that have earned her four Golden Globes, an Emmy, and two Academy Award nominations. She was also no stranger to Hollywood growing up, as the daughter of two actors. But when it comes to how the gender wage gap has affected the choices Dern made in her career, her answer is refreshingly frank.

"I'm going to answer that question as honestly as I try to answer any, and hopefully it can be as helpful as it is for me when other women are transparent — which is, when I started, I wouldn't ask questions. I'd be grateful for the job and I'd be told that if I didn't just accept it, they'd move on to a long list of women who would be thrilled just to have the opportunity for no money," Dern tells Bustle. "And the reason there has been such a massive change is women are talking to each other, women are being transparent with each other about their experience, about they make, about what their working conditions are."

Dern attributes the changing culture around the wage gap not just to women being more open with each other and vocal about their experiences, but also in allyship — in recognizing that this issue affects groups of women in different ways, particularly women of color and women in vulnerable industries.

"It's 20 percent difference in terms of the gender pay gap. But those numbers do not include people of color," says Dern to Bustle, alluding to the fact that, though April 2 marks Equal Pay Day for women "overall," for specific groups that day will come much later. Per Equal Pay Today, it will come for Black women on Aug. 22, 2019, for Native American women on Sept. 23, 2019, and for Latinx woman on Nov. 20, 2019 — dates figured from the 61 cents, 58 cents, and 53 cents women in those groups make on the average dollar for men, respectively.

"As a single mom, I have met so many women, particularly in the last year, across all industries — restaurant workers, female farm workers ... the gender wage gap is devastating in these communities, and they didn't feel they would be listened to," Dern tells Bustle. "And now they're finding fellow workers to stand up for them, and advocates — and we need to do that across all lines, across all industries, to all stand up together and do that."

Another easy way to fight the wage gap, according to Dern? Something you're probably already doing every day: talking in the group chat. Dern shares with Bustle that the group text between her costars on Big Little Lies has been instrumental not just in helping support each other and women's causes like the gender wage gap.

"We use [the group text] to support each other, but we also use it to inform each other. And there's always one of us who's learning something new," Dern tells Bustle. "We didn't do that 10 years ago. We weren't even working with other women on set. So now we have a community — let's use it, and do what women do best. You know, forever there was a a judgment on the fact, 'Women are always talking to each other,' right? They're always 'chitchatting.' Yeah, we're going to use our voices and we're going to make a difference."