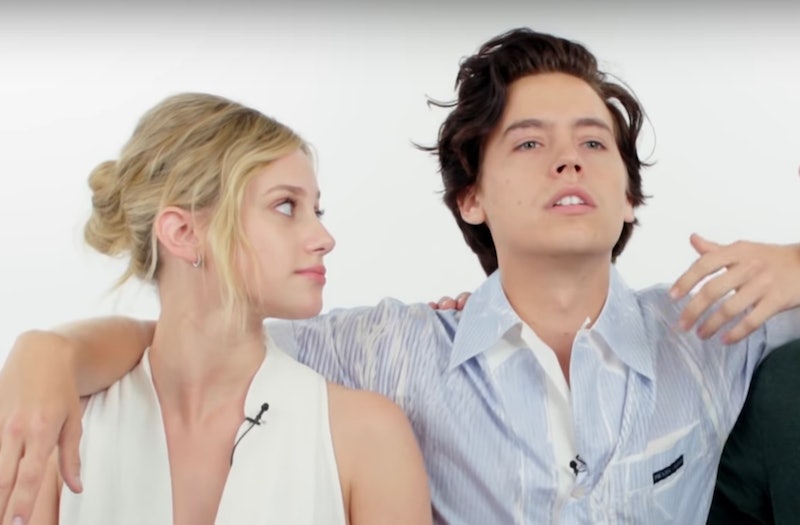 First thing's first: No, Bughead still hasn't officially confirmed whether or not they're in an off-screen relationship together. But a new video from Glamour makes it clear that they're super close friends at the very least, despite the fact that Lili Reinhart and Cole Sprouse's first impressions of each other weren't all that great. They didn't hate each other, but the sparks — ahem, *rumored* sparks — definitely didn't happen right away.

Glamour's video, titled "Riverdale's Cast Takes A Friendship Test," is probably going to give you all kinds of feels. The publication tasked the cast — which included Reinhart (who plays Betty Cooper), Sprouse (Jughead Jones), Madelaine Petsch (Cheryl Blossom), Casey Cott (Kevin Keller), and Vanessa Morgan (Toni Topaz) — with a series of "friendship" exercises, each of which revealed the extent of their real-life relationships. Spoiler alert: They're basically all besties.

In one of those exercises, the cast discussed their first impressions of one another. In speaking of Sprouse, Reinhart dead-pan admitted, "I thought his voice was annoying. That was my first impression," she told the camera with a smirk. "I was like, 'That guy's got an annoying voice,' she continued, "and now its grown on me, I guess."

Sprouse's first impression of his reported girlfriend wasn't quite as brutal as Reinhart's — it was actually pretty sincere. "Lili was a tough egg to crack," he confessed. "She's very shy at first and reserved, and I think it was about half way into the first season when she started letting people in, truly." Sprouse continued,

"She's one of those people that consistently pushes me to be better at the arts that I'm pursuing. That's just the kind of person she is. She inspires excellence out of everybody she works with."

So sincere, right? Eventually, though, Reinhart offered up some equally kind words about her "friend" Sprouse. During another exercise where the cast was asked to write down two nice things about each other, Reinhart told Sprouse,

"Hardworker, because I've seen you edit your photos after a photo shoot, and you spend hours and hours editing them. You're your own harshest critic. And I said you're very loyal to your family, because you are."

So, you know how he is with his family, huh? Not just like, surface-level know, but to the point where you think it's one of his best qualities, huh? Interesting. Does this mean that Reinhart has met Sprouse's family? Who knows. They've obviously got a sweet friendship either way.

Sprouse, for his part, told Reinhart, "Maybe your mother inspired this in you, but you are by nature a caretaker and an extremely nurturing person," he said. "You just want to make people feel better and help people get through whatever they’re getting through." Does this mean that Sprouse has met Reinhart's mother? Again, unclear. It's kind of fun to over-analyze the little things between these two, though, right?

There have been plenty of subtle — and not so subtle —  indications that Reinhart and Sprouse are a real-life couple. It seems like the two stars would prefer to keep their relationship status private for now, which is more than OK, of course. In the meantime, fans will just have to focus on the two stars' friendship, which is pretty darn heart-warming in and of itself.

More like this
George From 'Married At First Sight' Remains On Screen After His Arrest
By Darshita Goyal
Who Is Nick Cannon Dating & How Many Kids Does He Have?
By Jordyn Tilchen and Radhika Menon
The 'Love Island' Wedding Mystery That No One Saw Coming
By Darshita Goyal
Kevin Kreider Finally Asked Out Kim Lee On 'Bling Empire'
By Brad Witter
Get Even More From Bustle — Sign Up For The Newsletter