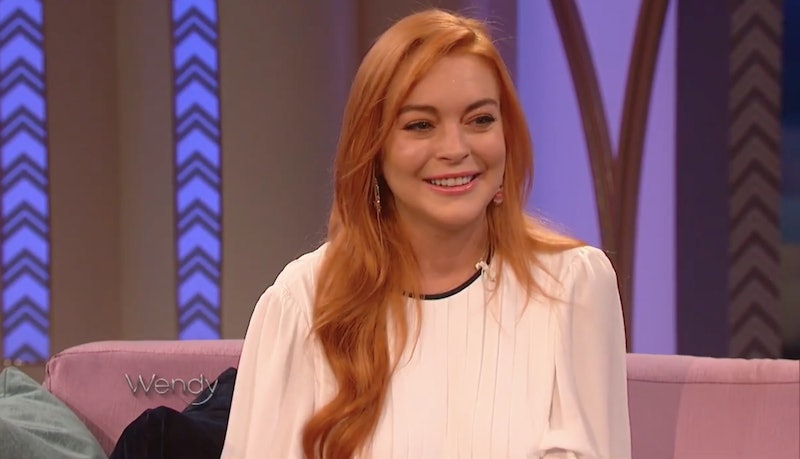 Regina George could come back to the big screen demanding everyone wear pink on Wednesdays, and audiences would love every minute of it. Lindsay Lohan wants Mean Girls 2 to happen, and she proved it when visiting The Wendy Williams Show on Friday. The actor is reaching the right people and making the necessary calls (none were reported to include three-way dials or baguettes) to get a Mean Girls sequel in the works. It seems like it's only a matter of other cast and crew members getting on board to make this thing happen.

When it comes to her tumultuous personal life, the 31-year-old said her partying days are long gone. She's clear-minded and laser-focused on the future — a potential sequel to the 2004 classic included. "I've harassed so many times. It's becoming a bit stalker-ish," she joked of her insistence on getting the movie made.

Williams asked if she's making the necessary phone calls and Lohan assured her she's doing extra for Mean Girls 2. "Oh yeah. I go to SNL when I'm in town, I go to [Chuck] Lorre and run to Steve Higgins," she said regarding the iconic comedy writers. And then, they were basically both like, "Why are you so obsessed with me?" OK that last part didn't happen, but it's good to know Lohan is really doing the most she can to get the ball rolling.

Lohan also totally understands that the upcoming stage adaptation of the show is currently Tina Fey's (Mean Girls co-writer) priority, and she's cheering her on. "I would [love to see the sequel] too, but I think they're really focused on the Broadway show right now," Lindsay told Williams about Broadway's Mean Girls, which debuts in New York City in April. "Tina [Fey]'s really, really immersed herself into the broadway show, so I can't wait to see it. It seems really exciting."

It's been nearly 14 years since Mean Girls hit the big screen, but clearly Lohan still has it on the brain (as does anyone who's ever watched it). Just a month ago, the actor told E! News even more about why she's so down to play Cady Heron again, but only if it's with her ladies. "Mean Girls 2 the movie — this is the importance. We need Rachel McAdams! We need the whole cast back!" she said.

"I'd love to do it again," she continued to E!. "We had so much fun making it. Mark Waters is such a great director, Tina Fey is an amazing writer, Paramount was great to work with — we all had a blast." Lohan even wished for a Mean Girls 2 back in December 2016 when she told CNN, "I've been trying so hard." Seriously, she's here for this.

Although Fey has opted out of a Mean Girls 2, cast members like Lacey Chabert (Gretchen Wieners), Daniel Franzese (Damien), and Jonathan Bennett (Aaron Samuels) have said they'd happily reunite for a sequel — with the original cast and crew, that is. Technically, a Mean Girls 2 came out in 2011, but Fey wasn't attached (nor a fan), and it didn't include any of the original cast members except for Tim Meadows (Principal Duvall).

Lohan told Williams that in the meantime she is living in a paparazzi-free Dubai, where she can focus on work. She was recently in a U.K. series Sick Note, is launching a beauty line, and will be in the movie Frame, which is filming in Riyadh and has an all-female cast.

Lohan's wrangling the Mean Girls cast and comedy writers while further proving how dependable she is, leaving her professional reputation of being late and unpredictable far behind her. She further explained to Williams,

"I don't like when people always bring up and rehash the past... I'd rather just stay focused on what I want to do next... It distracts from actually maybe meeting with people to do Batgirl, maybe doing a Mean Girls 2. It really distracts people."

Lohan is moving forward and hopefully she'll bring her North Shore High School classmates along with her.