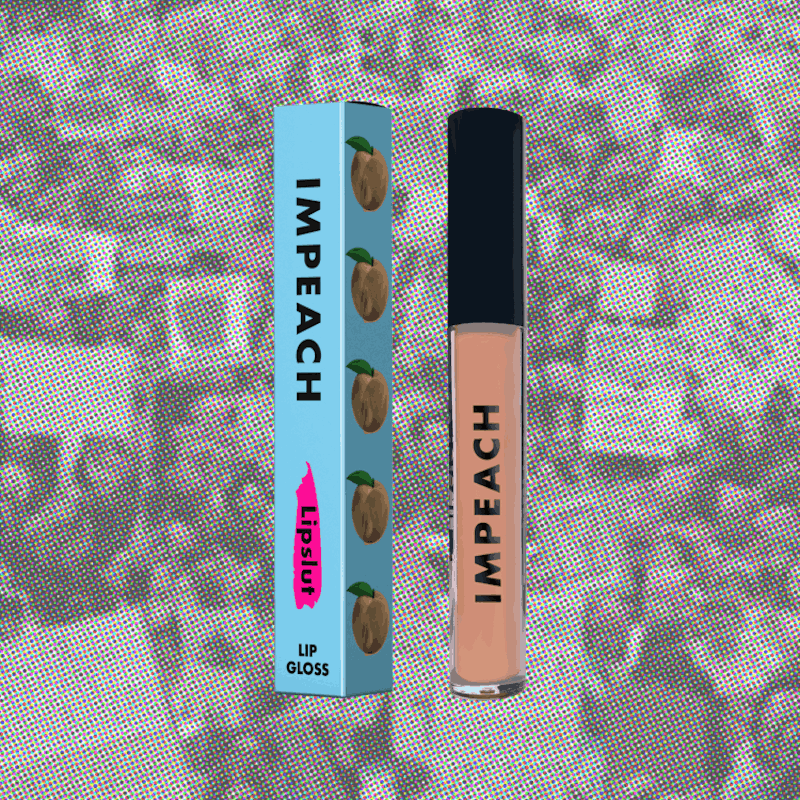 Beauty and style can be an escape from the world, a tiny corner where you do you. But one of the powers of makeup is that it can also be used to send a message. Lipslut's Impeach lip gloss is certainly doing that.

Even if you don't realize it, you may just be familiar with Lipslut as a brand. The beauty company formed following Donald Trump's election to the presidency in 2016 and launched its now viral line of lipsticks. Its F*ck Trump lippie is the one you likely saw take over social media back in 2017, but the brand isn't just about lipsticks. There's a charitable aspect as well. For each lipstick sold, 50% of the proceeds go to an organization connected to either the theme of the lippie or to a charity benefiting those effected by some of the biggest news stories of the day that you get to choose from when you shop. Think everything from reproductive rights, racial justice, and LGBT equality.

Now, LipSlut has been inspired by the impeachment inquiry to create an Impeachment lip gloss. According to Allure, LipSlut launched its new Impeachment gloss due to popular demand explaining that the brand's customers have been calling for one since Nancy Pelosi first called for the inquiry to be opened in late September.

Now, the brand has delivered with a peachy-pink gloss (get it? imPEACH?) that marks the first time the brand has moved outside of matte liquid lip shades.

The gloss launched for pre-order on the Lipslut website on Oct. 23 and retails for $17.95. According to the brand, orders will begin shipping in November.

Like all of the brand's products, the new Impeach lippie will donate half of its proceeds to charity. This time, Lipslut will be supporting organizations that help to elect women and members of other marginalized communities who are running for office.

Don't worry if you haven't shopped Lipslut before but are now jazzed about the brand. Its previous lipsticks, including its F*ck Kavanaugh lipstick (created after the Supreme Court nomination and confirmation of now Justice Brett Kavanaugh) and Notorious R.B.G. lipstick, which is inspired by the HBIC of the Supreme Court herself, are all still available on the brand's site.

Head to the Lipslut site now and grab an Impeachment gloss if you really want to put your charitable money where your mouth is.