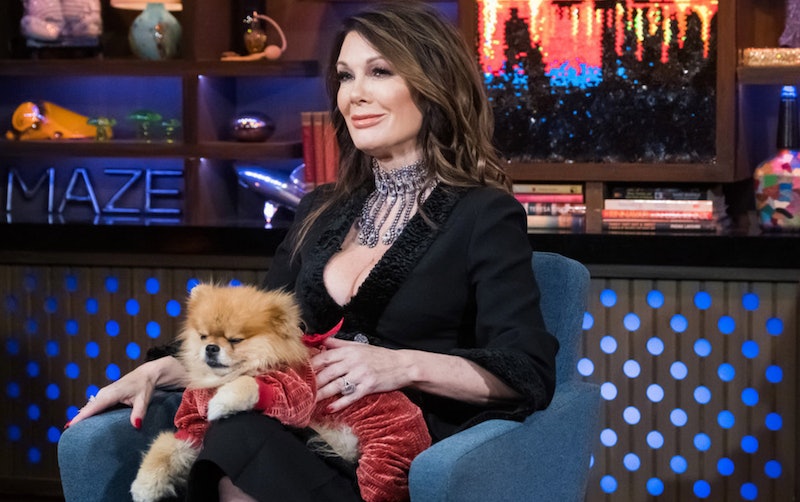 And now it's time for a visit from the Ghost Cheese Balls of The Real Housewives of Beverly Hills Past, Present, and Future. In a new episode of Bravo's The Real Housewives of Beverly Hills after show, Lisa Vanderpump talked about RHOBH and whether or not she will come back for Season 10 (assuming the show gets picked up for another round, of course). The good news: It sounds like LVP hasn't totally ruled out the possibility of returning. The bad news: It also sounds like LVP has not totally ruled out the possibility of not returning.

“I haven’t seen the show," she began. "The reason I haven’t seen the show is one, because it’s no fun being the recipient of everybody ganging up on you. Also, this isn’t the first time I’ve been through this.” She went on to draw parallels between the Puppygate falling-out that has rocked Season 9 to its rosé-drenched core and the fights she ended up in on Season 2, Season 4, and Season 6. And then, the queen of Vanderpump Rules waxed nostalgic about the halcyon days of RHOBH Season 1. She said,

“I think eight years ago, I had no real understanding of what I was about to get into, but it was exciting. Adrienne [Maloof] lived across the street from me. Taylor [Armstrong] was a friend of Adrienne’s. Camille [Grammer] I knew vaguely because she used to live in the same gated community. Kyle [Richards] I knew pretty well, and Kim [Richards] through Kyle. So, it was very organic, and I think we were really out to have a good time. But this season feels different, but I think that was because I was emotionally in a very different place than I have been for the last eight years.”

As LVP reflects on her past nine seasons, it… sort of sounds like she is ready to hand in her diamond? Like a pre-farewell video of sorts? But then, just as you're like "This feels like a farewell video," she is asked directly if Season 9 will be her last. She offers up a wonderfully vague answer: “It depends. I can’t say.” Augh, my LVP-loving heart!

Before Season 9 filming began, Vanderpump’s brother Mark died unexpectedly. The grief-stricken restauranteur attempted to carry on with the show, but when the Lucy Lucy Apple Juice feud spiraled out of control, she ultimately decided to step away. “This last year has been extraordinarily challenging and I admit I floundered – I didn’t cope – as I wallowed in the depths of depression, having some good days and many bad,” she wrote on her BravoTV blog in March. “I still attempted to commit to yet another season of The Real Housewives of Beverly Hills. I believe that my instincts to withdraw this year were correct, as Andy validated on Watch What Happens Live recently.”