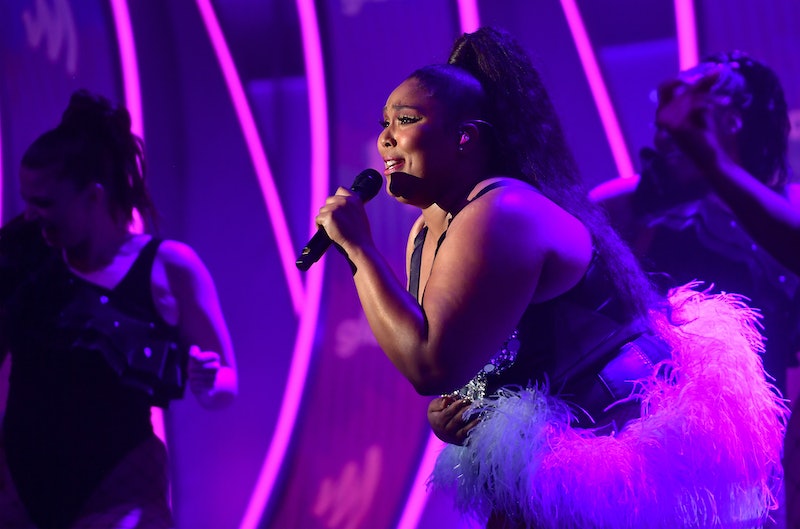 C is for collaboration, that’s good as hell for me. If Lizzo and Cookie Monster’s “Truth Hurts” parody lyrics do not leave you craving a full-length version of the song from the duo, it is probably because you might literally be Oscar the Grouch. On Tuesday, Sept. 10, the Muppet and the musician exchanged some tweets featuring some cookie-themed lyrics set to the tune of the song that is currently sitting at No. 1 on the Billboard Hot 100. And yes, Cookie Monster and Lizzo's prefect tweets will make you want to throw your head back and emit a high-pitched cackle that would make Elmo proud.

He teed up that ball, and did Lizzo ever swing for the fences. The “Good As Hell” singer quote-tweeted the Sesame Street legend’s post and added some more lyrics about cookies. Picking up where Cookie Monster left off in "Truth Hurts," Lizzo tweeted,

"EVEN WHEN ME CRUMBLE CRAZY ME GOT SHORTBREAD PROBLEMS THATS THE MONSTER IN ME NOM NOM THEN ME EAT EM THATS THE COOKIE IN ME."

Brace yourself, because the brilliance continues. Over on Instagram, Lizzo shared screengrabs of the tweets she and Cookie Monster posted, a few A+ lyric suggestions by fans, and some more lyrics that she cookied, er, cooked up: "COOKIE HURTS NEEDED SOMETHING WITH MORE ICING! BOM BOM BI DUM BI DUM DUM AYEEEE!" She also asked if anyone knew how to get to Sesame Street because she's "TRYNA TWERK W/ BIG BIRD!!!"

"Truth Hurts" has generated memes. It inspired a Spotify "DNA test." The song itself went to No. 1 a whopping two years after it was released. But this Cookie Monster moment? You better believe this just may take the cookie, er, cake.

Circling back to the request Lizzo included in her Instagram caption: How long before she stops by Sesame Street so she and Cookie Monster can perform their "Truth Hurts" parody together? It really would be a gift to each and everyone one of us. Big Bird better be working on that invite. Let's put it out in the universe: May we one day see Lizzo on an episode of Sesame Street where she will perform a rousing rendition "Truth Hurts (the Cookie Monster remix)."

A polite and gentle suggestion to Big Bird: If there happens to be a Mrs. Fields on Sesame Street, maybe write out an invite on one of those giant cookie cakes? I would say Cookie Monster should handle it because it's his thing, but uh, we all know what would happen to that invitation before it ever made it to the mailbox.