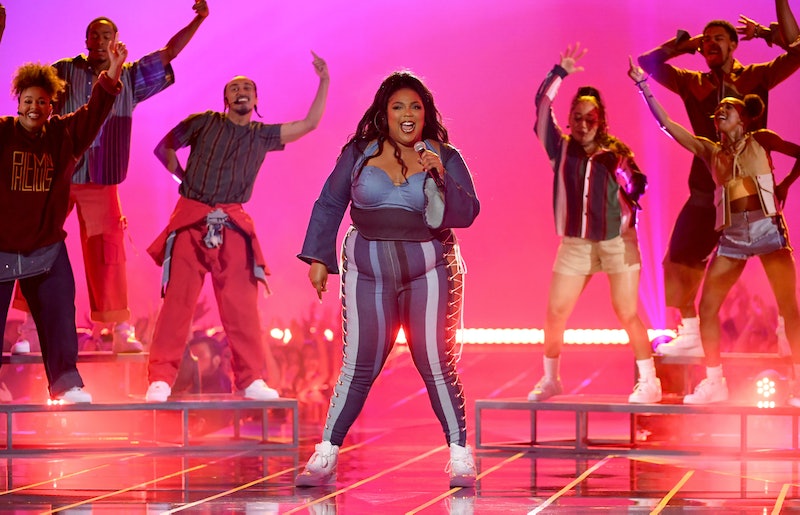 The MTV Movie & TV Awards might be all about the best of television and movies, but that didn't stop the 2019 ceremony from featuring the buzziest woman in the music biz — Lizzo. Lizzo's 2019 MTV Movie & TV Awards performance had the rapper/singer/flautist (not flautas, Melissa McCartney) singing "Juice" with a Sister Act 2 reference thrown in. Lizzo's first-ever performance at an awards show was bound to be epic no matter what due to her massive talent and charisma. But she paid homage to movies and gave Sister Act 2: Back in the Habit fans an additional reason to praise her at the MTV Movie & TV Awards.

No one thought for one moment when Lizzo stepped on the stage in a robe for soulful, slow rendition of "Juice" that she would keep it on for the entire performance. But when a stagehand told her backup performers, "Lizzo says take off your robes," the connection to Sister Act 2 became gloriously clear. Just like Lauryn Hill and company's performance to "Joyful Joyful" led by Whoopi Goldberg's Deloris, Lizzo and her performers took off their robes to show their true style and broke into (what else?) joyful song and dance to "Juice."

Many people have acknowledged the greatness that is Sister Act 2 with references or parodies — Broad City did a notable one complete with a Goldberg cameo. But Lizzo didn't need the Oscar winner and The View host to pop in since she was fully capable of leading her chorus just like Deloris did back in the 1993 movie. But instead of rocking a habit, Lizzo instead rocked jeans with her own name bezaddled on the butt. Because Lizzo really is 100 percent that b*tch.

It wasn't just people watching the MTV Movie & TV Awards from their couches that appreciated Lizzo's performance. The audience full of famous people was also super into the empowering performer. Presenter and The Good Place star Jameela Jamil shared on Twitter how excited she was to meet Lizzo during the pre-recorded ceremony. Schitt's Creek star, presenter, and winner of Best Comedic Performance Dan Levy shared footage of Lizzo's "Juice" performance from the audience.

Whether you knew instantly that Lizzo was channeling Goldberg's Sister Mary Clarence or not doesn't really matter. Because the Cuz I Love You singer knows how to put on a great show under any circumstance. Unlike her fellow musical performer Bazzi, she just decided to really lean into the theme of the MTV Movie & TV Awards by celebrating one of the greatest movies of the '90s — Sister Act 2. And there's no doubt that she didn't leave the whole audience joyful, joyful after that performance of "Juice."