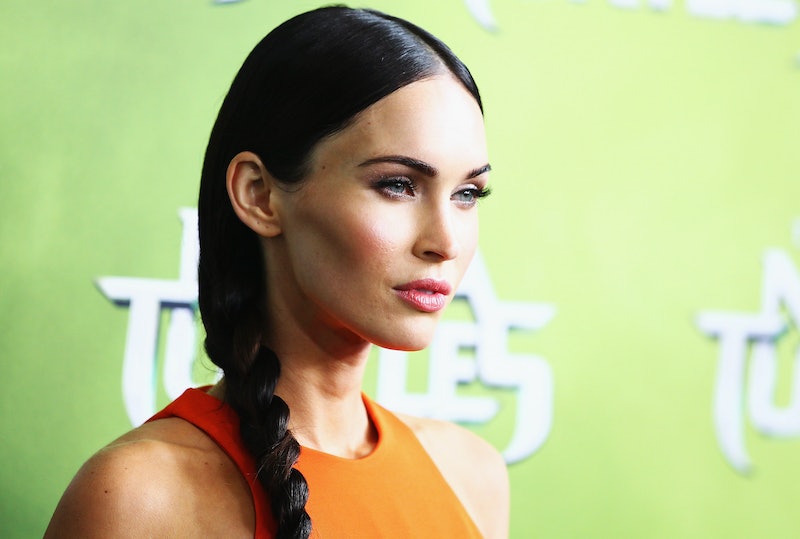 During her rise to fame throughout the 2000s, Megan Fox was frequently typecast in "hot girl" roles. As it turns out, though, being known for your good looks can be both a blessing and a curse. Fox suffered a breakdown after being overly sexualized and objectified in the early days of her career, the star recently revealed to Entertainment Tonight. It took quite some time before she began to recover, but she credits one major milestone, in particular, for helping change her perspective.

All of this came to light when ET brought together Fox and screenwriter Diablo Cody to chat about the 10-year anniversary of the now cult-classic horror comedy, Jennifer's Body on Sept. 18. The pair discussed the mixed reviews and poor ticket sale numbers the film received when it first came out.

"There was so much going on with me at that time, that movie being picked apart was not at the top of [my list of concerns]," Fox admitted in the interview. "Because I had such a fraught relationship with the public, and the media, and journalists, and I was struggling so much at that time in general, this didn't stand out as a particularly painful moment, it was just part of the mix."

Shortly before Jennifer's Body was released, Fox made headlines for her comments about director Michael Bay, whom she'd worked with on the first two Transformers films. During an interview with Wonderland in September 2009 (as per the Los Angeles Times), the then-23-year-old star said Bay "wants to be like Hitler on his sets" and that he’s "a nightmare to work for." Bay didn't immediately respond to what Fox said — not in public, at least. When asked by GQ about her comments in 2011, however, the director said, "She was in a different world, on her BlackBerry. You gotta stay focused. And you know, the Hitler thing. Steven [Spielberg, who was one of the executive producers on Transformers] said, 'Fire her right now.'" Spielberg, for his part, denied giving Bay the order to fire Fox while speaking to Entertainment Weekly in 2012. "That’s not true. That didn’t happen," he told the outlet.

Less than a week after that, Jennifer's Body came out and negative reviews started rolling in. "Because of the way the film was marketed, people wanted to see the movie as a cheap, trashy, exploitative vehicle for the hot girl from Transformers," Cody explained to BuzzFeed News in December 2018. "That’s how people insisted on seeing the film, even though I think when you watch it, it’s pretty obvious that there’s something else going on."

Fox told ET that Jennifer's Body wasn't the only project where she felt objectified for the sake of marketing, though — it seemed more like a common thread throughout her entire career. "It wasn't just that movie, it was everyday of my life, all the time, with every project I worked on and every producer I worked with," she told the outlet. "It preceded a breaking point for me." She then went on to explain,

"I think I had a genuine psychological breakdown where I wanted just nothing to do ... I didn't want to be seen in public at all because the fear, and the belief, and the absolute certainty that I was going to be mocked, or spat at, or someone was going to yell at me, or people would stone me or savage me for just being out … so I went through a very dark moment after that."

Suffice it to say, she was really put through the public ringer. After she gave birth to her first child, Noah, with husband Brian Austin Green in 2012, however, her perspective finally began to change. "That was the first real breakthrough where my consciousness shifted and my mind opened up and I was able to see from a birds eye view and breath and take it in," Fox recalled to ET. "And with every kid I feel like that's always been the doorway into a better version of myself."

Fox and Green first started dating way back in 2004, and tied the knot in 2010. In addition to Noah, the couple has welcomed two more sons into the world: In 2014, Bodhi was born, and Journey came along in 2016. "[Having children] changes your priorities and, for me, it changed the way that I think about human life and spirituality, because I feel as if I have known these souls before and I have lived with them in past lives," she told the UK's Mirror shortly after Bodhi was born. "It has sent me off on a spiritual quest.

The strength that Fox has developed and demonstrated in the face of everything she's been through is, well, pretty incredible. Can you imagine going through all of that, and in front of the whole world to boot? She definitely didn't deserve to get treated like she did, but luckily, she came out the other end with a much stronger sense of self.