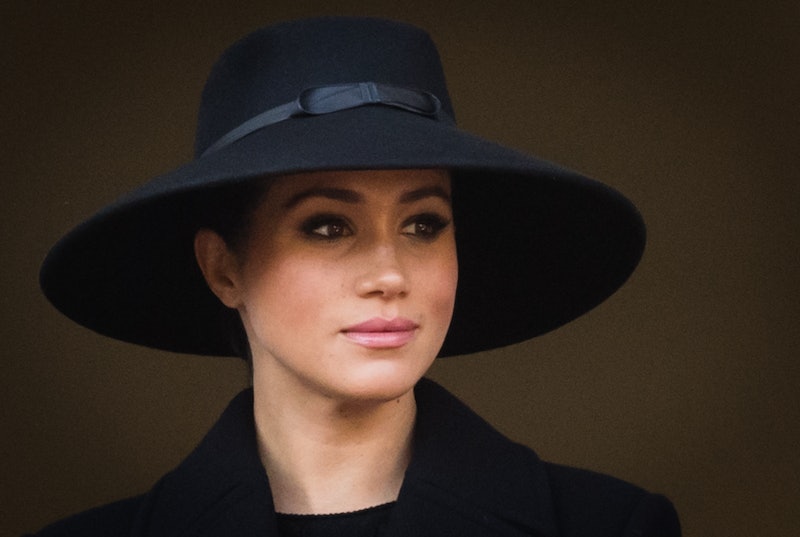 Meghan Markle is revealing new details about how she really felt while felt as a member of the British Royal Family. According to new court documents, Meghan Markle reportedly felt "silenced" by the Royal Family's press protocols while enduring attacks from the British tabloids during her pregnancy with son Archie. The documents — which were released as part of Meghan and Prince Harry's ongoing lawsuit against the Mail on Sunday — claim that friends of the former Suits star felt the need to step up and publicly defend her because she was unable to engage herself due to the Royal Family's common practices.

"[Meghan] had become the subject of a large number of false and damaging articles by the U.K. tabloid media, specifically by the [Mail on Sunday], which caused tremendous emotional distress and damage to her mental health," the documents read, according to E! News. "As her friends had never seen her in this state before, they were rightly concerned for her welfare, specifically as she was pregnant, unprotected by the Institution and prohibited from defending herself."

As a result, after the Mail on Sunday published a now-infamous article about Meghan's relationship with her estranged father, Thomas Markle, several of her close friends decided to speak with People magazine in her defense. In the documents, Meghan's lawyers posit that her friends were driven to speak out because Kensington Palace "mandated" that people close to the Duchess of Sussex give "no comment" about her to the press, even in her defense.

The documents also claim that Meghan had no knowledge of her friends' decision to speak with People, and that it was Harry who let her know that the article had been published in the first place. "Had the Claimant been asked or been given the opportunity to participate, she would have asked the KP Communications Team to say on the record that she had not been involved with the People magazine article, as she had not been," the documents read, adding that she was "not involved" in any way.

On October 1, Meghan and Harry announced a lawsuit against the Mail on Sunday for invasion of privacy, with Harry citing the alleged "relentless propaganda" and "false and malicious" media harassment against Meghan in a statement. In particular, his statement addressed the alleged "intrusive and unlawful publication" of a private letter written by Meghan to her father. Harry's suit claims that the tabloid "purposely misled” readers "by strategically omitting select paragraphs, specific sentences, and even singular words to mask the lies" the media allegedly "had perpetuated for over a year."

A spokesperson for The Mail on Sunday said in a statement in October that the paper "stands by the story it published and will be defending this case vigorously. Specifically, we categorically deny that the Duchess’s letter was edited in any way that changed its meaning."

In January, Meghan and Harry announced that they intended to "step back" from their roles as "senior" royals, and Harry even referenced the media's attacks as one of the reasons why he felt there was "no other option" but for them to step down. "The decision that I have made for my wife and I to step back is not one I made lightly," Harry said at a charity dinner for his organization, Sentebale, on Jan. 19. "It was so many months of talks after so many years of challenges. And I know I haven’t always gotten it right, but as far as this goes, there really was no other option."

More like this
Prince Harry Incorrectly Recites Christina Aguilera’s “Genie In A Bottle” Lyrics
By Jake Viswanath
Princess Diana’s Brother Shared A New Photo Connected To Her Childhood
By Darshita Goyal
Helena Bonham Carter Doesn't Think 'The Crown' “Should Carry On"
By Sam Ramsden
The Spice Girls Are Set To Reunite At King Charles III’s Coronation
By Sam Ramsden
Get Even More From Bustle — Sign Up For The Newsletter
From hair trends to relationship advice, our daily newsletter has everything you need to sound like a person who’s on TikTok, even if you aren’t.