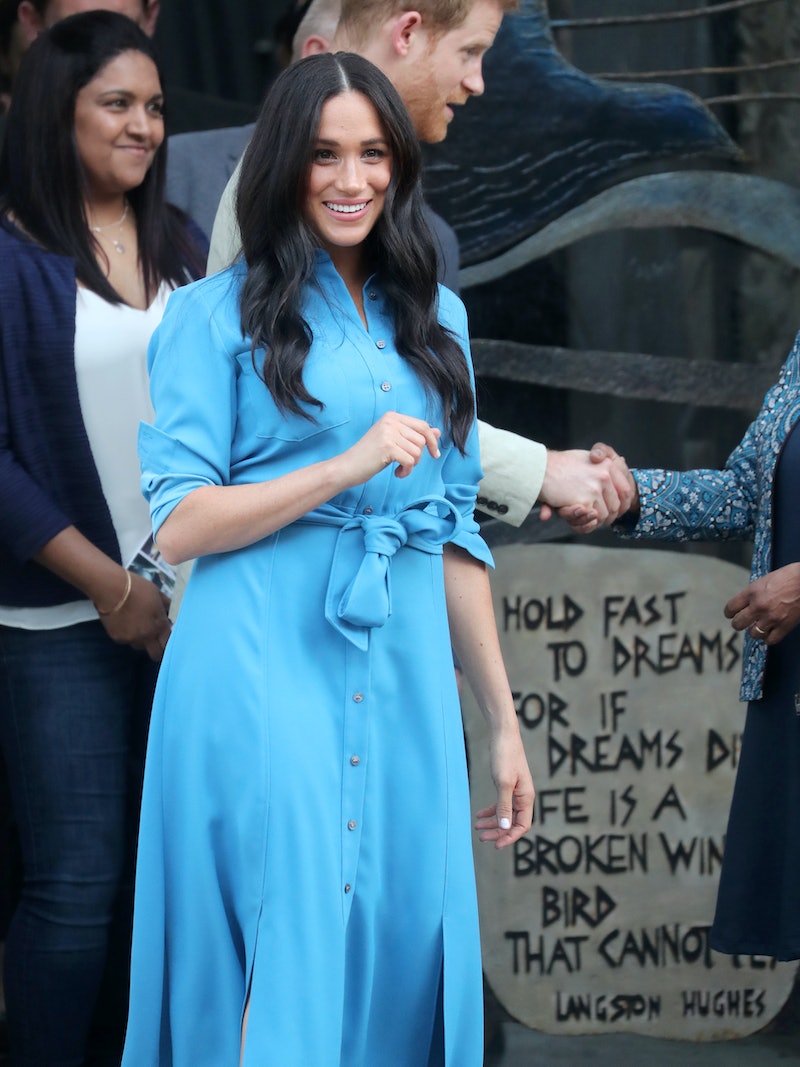 Meghan Markle, Prince Harry, and even baby Archie are all currently on a royal tour of South Africa. The Duchess of Sussex has an extensive itinerary ahead of her, and royal fashion fans don't want to miss a second of her style choices. During her first day in South Africa, Meghan Markle rewore a blue T-shirt dress from her previous royal tour of Australia — and she looked just as stunning.

Markle was first spotted wearing the blue T-shirt dress by Veronica Beard on a royal visit to Tonga last October. While the dress is stunning, the piece got overlooked at the time, thanks to Markle's ultra-affordable shoes. The Duchess first paired the Veronica Beard piece with Banana Republic pumps that were under $90 (and are back in stock now).

According to style website Meghan's Mirror, the Duchess didn't just rewear the dress in South Africa. Her entire ensemble was a repeat. She paired her blue T-shirt dress with a pair of Castañer wedges that she also wore while in Australia, though with another ensemble.

If you didn't know, now you know. Meghan Markle is an outfit repeater.

Unfortunately, Markle's Veronica Beard dress is sold out in both the blue and red versions. But it's not all bad fashion news. Markle's Castañer wedges are still available, and they're $120. Plus, the Duchess of Sussex isn't the only royal who loves them.

Markle's sister-in-law, Kate Middleton, is also a fan of Castañer and has worn her own version of the brand's wedges multiple times. While the duchesses do wear different versions of the shoe, both pairs feature roped wedge bottoms and a classic espadrille design with ankle straps.

During a charity polo match that Prince William played in during early July, the Duchess of Cambridge wore the wedges with a flowing midi-length dress. Only a few days prior, she'd also worn them to an official royal engagement at the Hampton Court Palace Garden Festival.

While Middleton's wedges are no longer available, you can still purchase Markle's pair from her South Africa and Australian trips at Net-A-Porter.

Markle and Prince Harry's tour of South Africa will take place over 10 days, so there's a chance that the Duchess of Sussex could choose to rewear more pieces. After all, she's no stranger to doing so. She's doubled up on everything from her favorite pair of shoes — like her Sarah Flint and Aquazurra pumps — to a cape dress from Stella McCartney.

Royals, they really are outfit repeaters like us — and Lizzie McGuire.