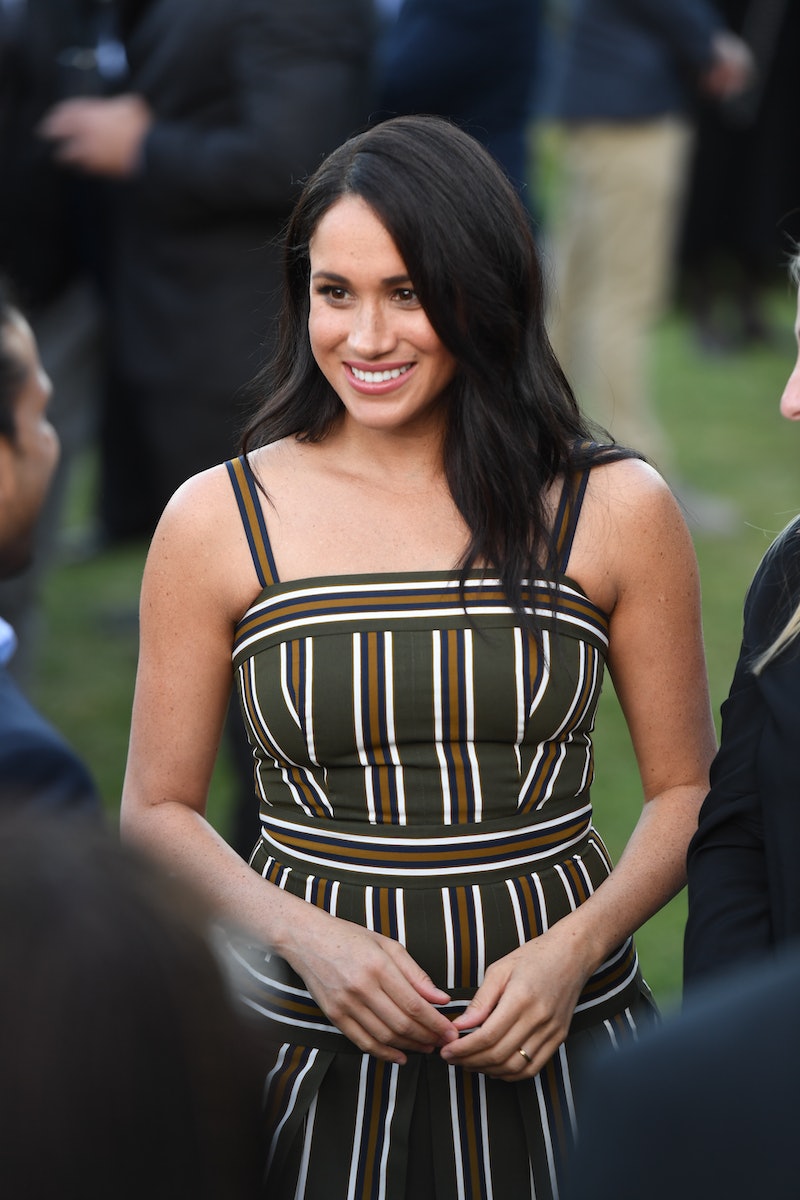 Meghan Markle recently resumed her royal duties following maternity leave, beginning with a tour of South Africa with Prince Harry and baby Archie. Public appearances during the trip means fans are in for a lot of fashion moments from Markle. But that doesn't mean she's only wearing brand new looks — in fact, the Duchess is quite a prolific outfit repeater. Most recently, Meghan Markle rewore a striped dress to a reception in Cape Town during her travels, which she initially wore during her royal tour of Australia in October 2018.

While in Australia, Markle debuted the floor-sweeping, brown-and-olive maxi by Aussie designer Martin Grant. She wore the frock with a pair of ankle-tie Castañer Carina platform espadrilles while she and Harry spent time on the beach with locals. Now, almost a year later, Markle has worn the dress again with black pumps on Sept. 24. As of press time, the dress, which was from the brand's 2019 Resort Collection, is no longer available for purchase.

The striped dress is further proof of Markle's relatable style, which finds her wearing affordable brands like J. Crew, Club Monaco, and Reformation.

In another instance of outfit repeating, Markle rewore a belted blue T-shirt dress by Veronica Beard the day prior. She wore the bright frock with her beloved Castañer Carina canvas wedges — the same shoes she wore with the maxi dress first time around.

The Veronica Beard Cary dress, which also comes in red, is currently sold out. The ever-popular espadrilles, however, are currently in stock over at Net-a-Porter for $120 in a variety of colors.

Markle's penchant for fashion recycling applies to jewelry, too. She often wears classic accessories that belonged to her mother-in-law, the late Princess Diana, who died in 1997.

To prove that royals are just like us, here are four other times that Markle repeated a piece in a memorable way.

The Duchess wore Diana's gold butterfly post earrings in October 2018 while traveling through Australia. They were a sweet and subtle way to keep Princess Di nearby.

She brought the simple earrings back in September 2019 for the launch of her Smart Works fashion capsule collection in London.

At her wedding reception held in May 2018, Markle famously wore a massive aquamarine cocktail ring that was from Diana's personal collection. It was a truly statement accessory.

She was seen wearing the ring again in October 2018 when visiting Tonga. Notice that Markle repeated the combination of wearing the blue sparkler with a long, white dress.

Markle wore this navy blue puffer jacket while in New Zealand with Harry in October 2018. She actually borrowed it from him, as he was seen wearing it just a few days prior.

Royal watchers are well aware of the romantic and sentimental elements of Markle's engagement ring. Prince Harry designed the ring himself and incorporated gems sourced from his mother's jewelry archive.