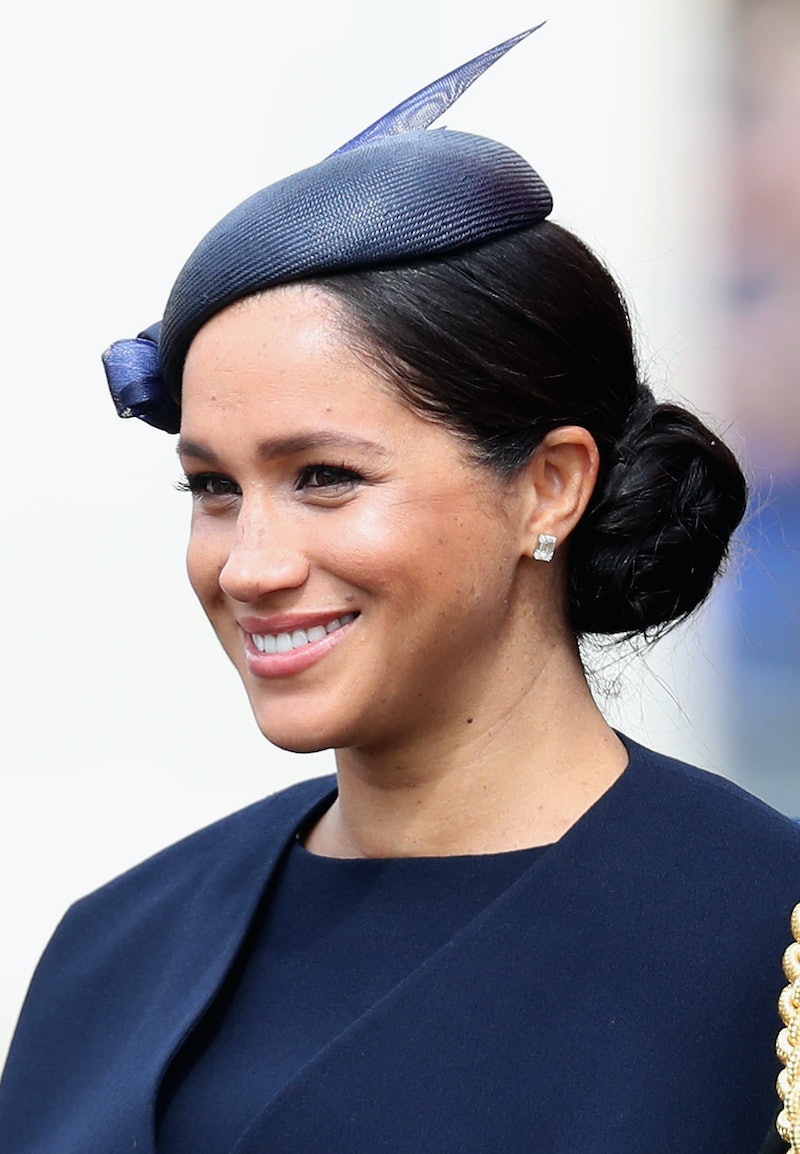 The Duchess of Sussex just made rising above negativity look like a piece of cake. Meghan Markle's cupcake Instagram post via the official Sussex Royal account was a sweet reminder to focus on the positive. Following recent backlash over her and Prince Harry's use of private jets (despite their commitment to environmental issues), the duchess chose to shine a spotlight on East London's Luminary Bakery.

The first photo in the carousel included uplifting affirmations — such as, "You are beautiful," "You are strong," "Be kind to yourself," and "You are so loved" — atop the desserts. The small business also offers "skills training, paid employment and a supportive community to help women thrive" per its website.

“What they’ve created at Luminary Bakery is exceptional — it’s a space for baking, healing and rebuilding," the duchess wrote in the caption. "When I visited the women earlier this year I was struck by how the baking, itself, is a means of therapy for these women — which in many ways makes complete sense — feeling they had no control over their lives based on their previous (and often harrowing) circumstances, they found comfort in the measured nature of baking."

As she concluded her portion of the post: "Mixing equal parts of one ingredient and another could yield the perfect dessert, but the act of doing so provided personal balance. So while the baked goods are absolutely delicious, it’s the story of how the program at Luminary reshapes lives through baking that is the actual icing on the cake.”

This wasn't the first time the former Suits actor highlighted the bakery's inspiring work. When Markle guest edited British Vogue's 2019 September issue, she said that including the women of Luminary Bakery was a "non-negotiable." As she explained in a handwritten thank you note shared on social media: "The work you do, what you represent to the community, the spirit of the women there — you all embody what it means to be "forces for change.""

The new Instagram post, of course follows the Duke and Duchess' tradition of rotating the accounts they follow "based on causes and social issues that matter" to them. Since creating the Sussex Royal IG account in April, the couple has devoted individual months to mental health awareness, the LGBTQ+ community, climate change and the environment, and, most recently, lesser-known grassroots organizations.

As much as Meghan and Harry advocate for issues near and dear to their hearts, they still somehow incur plenty of brutal criticism. When they came under attack over their aforementioned private jet usage, Ellen DeGeneres noted the unfairness of that reality.

"Portia and I met Prince Harry and Meghan in England to talk about their work on wildlife conservation," DeGeneres tweeted in defense of the royal couple on Aug. 19. "They were the most down-to-earth, compassionate people. Imagine being attacked for everything you do, when all you’re trying to do is make the world better."

Among the recent trips for which they came under fire was a birthday celebration for the duchess at Elton John's home in Nice, France. As the "deeply distressed" musician noted in his own Aug. 19 tweets, however, not only did he and husband David Furnish provide them with a private jet, but they also ensured that the flight "was carbon neutral, by making the appropriate contribution to Carbon Footprint™."

"I highly respect and applaud both Harry and Meghan’s commitment to charity and I’m calling on the press to cease these relentless and untrue assassinations on their character that are spuriously crafted on an almost daily basis," wrote John, also noting that Prince Harry’s Mother, Diana Princess Of Wales, was one of his "dearest friends."

Despite all the negativity, Markle's ability to continue to rise above the noise remains one of the many ways she inspires people across the globe.

More like this
Prince Harry Incorrectly Recites Christina Aguilera’s “Genie In A Bottle” Lyrics
By Jake Viswanath
I Read Prince Harry's 'Spare' So You Don’t Have To: 11 Highlights To Know
By Marina Watts
Twitter Is Identifying With Sally Field & Jane Fonda’s Friendship In New Viral Video
By Jake Viswanath
Britney Spears Shared The Real Reason She Shut Down Her Instagram Account
By Brad Witter
Get Even More From Bustle — Sign Up For The Newsletter
From hair trends to relationship advice, our daily newsletter has everything you need to sound like a person who’s on TikTok, even if you aren’t.