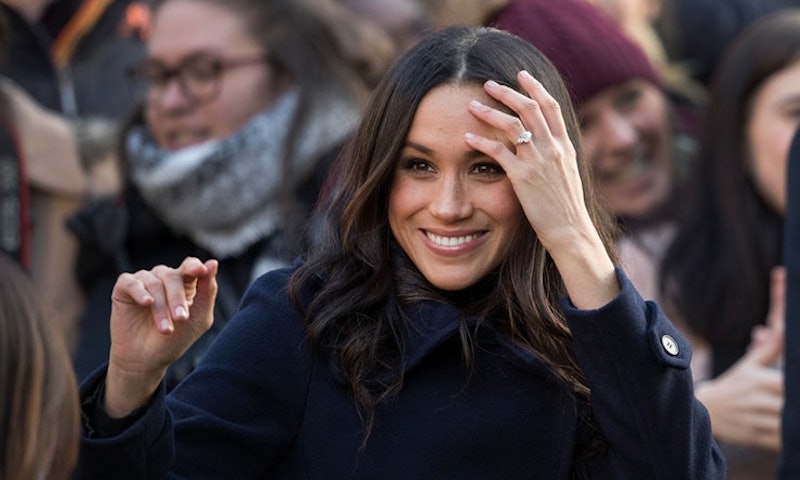 What's the mark of a true royal? The ability to handle an awkward moment with grace and charm. On Thursday, Feb. 2, Meghan Markle was a presenter at the Endeavour Fund Awards, a ceremony that honors wounded service people, but things went a bit awry when neither Markle nor her presenting partner could find the name of the honoree they were announcing. The moment was caught on Twitter in all of its uncomfortable glory, but despite the snafu, Markle remained calm throughout.

The future royal smiled, laughed, and helped her partner shuffle through papers as the room erupted with appreciative laughter. In short, Markle handled the moment like a pro, and the audience seemed to appreciate her ability to both frantically search for the name and find the humor in the potentially awkward situation. Even though she won't officially become a member of the British royal family until May, Markle is already nailing this whole honorary princess thing.

Before Markle and her co-presenter were sabotaged by a stack of unyielding papers, she set the stage for the announcement with the perfect intro. Markle said,

"Thank you so much. I'm truly privileged to be here. The second prize of the evening is awarded to an individual who's endeavored to achieve excellence in their chosen sport or adventurous challenge."

The rest of the presentation wasn't quite so elegant, but Markle definitely was — after watching the moment on video you may find yourself aspiring to be as unflappable as the Suits star.

According to the Daily Mail, the Endeavour Fund Awards marked the first time that Prince Harry and Markle walked a red carpet together — and adorably, they both wore snazzy suits. The couple picked the perfect event to make their red carpet debut since the Endeavour Fund Awards support a cause close to the royal family's hearts. The fund is supported by the Royal Foundation of the Duke and Duchess of Cambridge and Prince Harry, and its goal is to support service people who have overcome great obstacles and use sports challenges to help them on their rehabilitation journey.

Ultimately, Markle presented an award to Daniel Claricoates, a soldier who developed PTSD after multiple tours in Afghanistan. The Daily Mail reports that he's since scaled Mount Kilimanjaro and Mount Vinson. Perhaps the best part of Markle's save is that while she kept the mood light, she also never took the focus off of the amazing people, like Claricoates, that she was there to honor.

As has become the norm since their engagement was announced, the awards ceremony marked yet another occasion where Markle broke with royal tradition. Generally, only royal family members would hand out awards at a ceremony like this one, but it seems that Markle is already being treated as an official part of the family. Her wedding may be months away, but she and Prince Harry are already touring England (and beyond) as Markle learns the royal ropes.

If her winning attitude at the Endeavour Fund Awards is any indication, then Markle is going to be able to tackle any royal event that lies in her future. Her ability to keep a cool head and charm a crowd is sure to be an asset as she continues to interact with the public. As an actor, Markle has had plenty of training on how to deal with the unexpected, and her talents shined as she pushed through the awkwardness to make sure the attention remained on the deserving nominee.

This is just the start of Markle's life as a royal, and she's already making the transition look easy. By the time May rolls around, Markle will likely be ready to run the whole show if need be — and honestly, it's hard not to be here for it when she's such a boss.