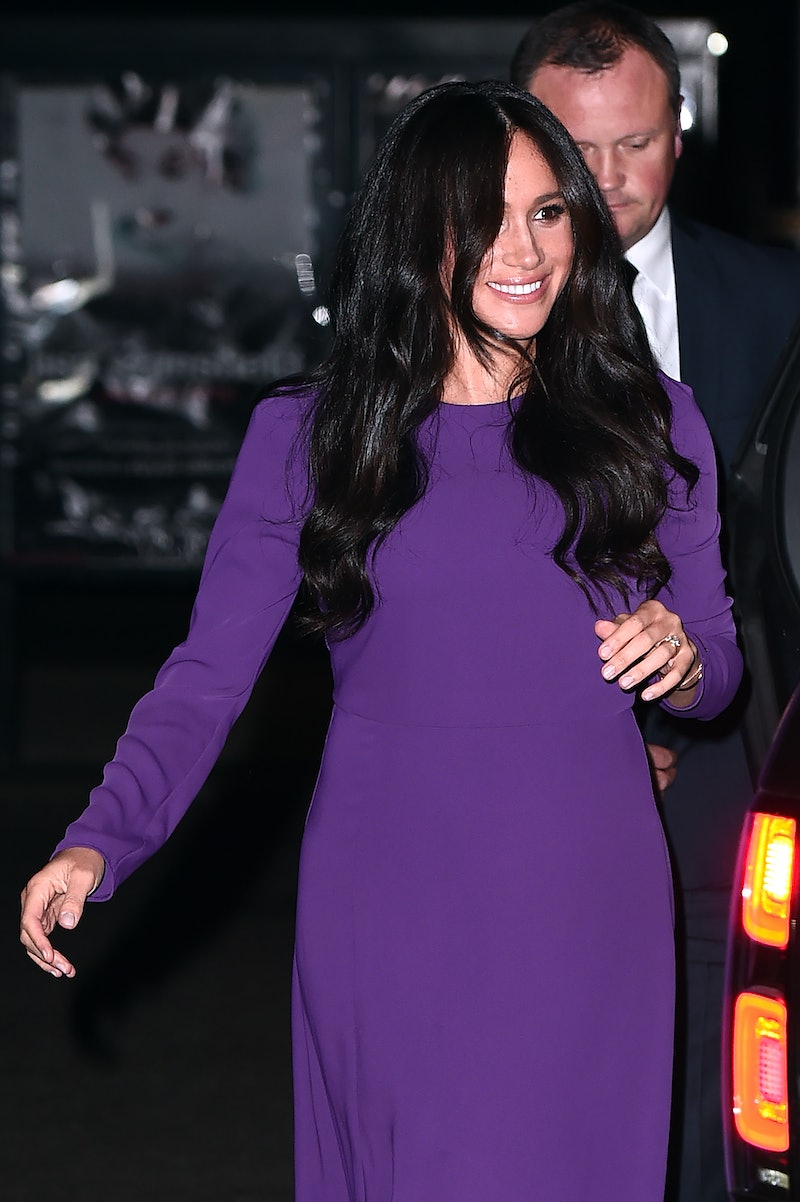 The royal tour of South Africa ended two weeks ago, but Meghan Markle's rewearing streak hasn't. The royal is back to her UK-based duties and looking amazing doing it. The Duchess of Sussex stepped out for her second engagement after the tour, and she did it in a big way with an ensemble that may look familiar.

On Oct, 22, Markle attended the opening ceremony for the One Young World Summit, a conference dedicated to bringing young leaders from around the globe together to create major social impacts. For the event, the Duchess appeared solo (after all, someone's got to keep baby Archie) wearing a vibrant purple Aritzia dress according to Markle-based style blog Meghans Mirror. If the frock looks familiar, well, that's because she's worn it before.

According to the style site, Markle was first seen in the long-sleeved, midi-length dress back in January of this year when she visited Birkenhead with husband Prince Harry. At the time, the Duchess paired the piece with another bold choice: a bright red coat from Sentaler and bold heels in the same color. The result was a color-blocked dream.

This time, though, the Duchess wore the Aritzia frock solo, opting to pair it with navy Manolo Blahnik pumps and her hair down in a perfect blow-out that Kate Middleton herself would be proud to wear.

Markle's decision to wear the Aritzia dress again continues her trend of revisiting past items in her wardrobe. Since the South African royal tour, repeating ensembles seems to have become the Duchess of Sussex's new style move. Why not? When you've got so many great pieces, there's no reason not to wear them twice.

Most recently, the Duchess rewore a dress that may have been a bit more sentimental: the one from her engagement announcement. For the 2019 Wellchild Awards, Markle donned her deep green P.A.R.O.S.H. dress which she last wore when she and Prince Harry's engagement was announced in Nov. 2017. That wasn't all though. The Duchess paired the frock with her Sentaler coat she wore to Christmas Mass with the royal family in 2017.

Markle's decision to wear a multitude of previous pieces while in southern Africa coupled with her ensembles at her two most recent appearances could just be a coincidence, or maybe, Markle just really loves her closet. Either way, this Duchess and her outfits are great no matter how many times she wears them.