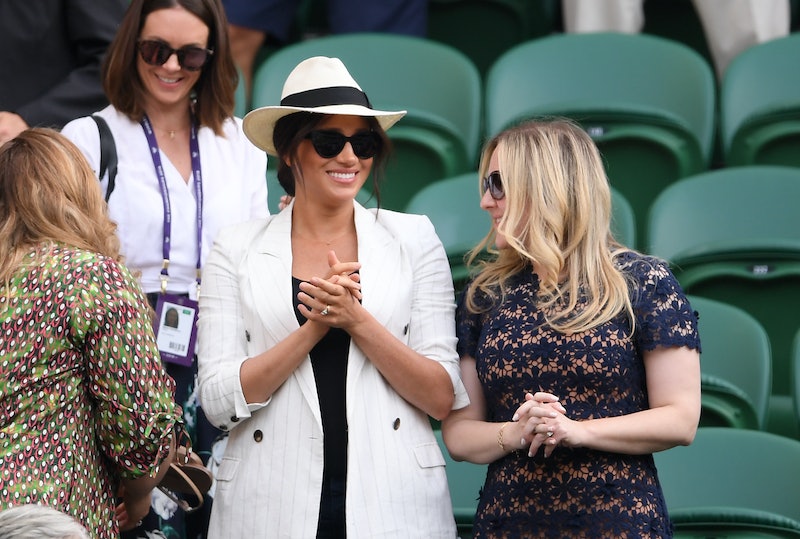 While Meghan Markle may still technically be on maternity leave, that didn't stop the Duchess of Sussex from appearing at Wimbledon to support her friend Serena Williams. The new mother headed to the tournament looking so chic, and it turns out that Meghan Markle's Madewell Wimbledon hat is actually affordable and still up for grabs. If you want to cop Markle's style, now is the time.

According to Harper's Bazaar, Markle's appearance at the tennis match was a surprise, but this does mark her third time appearing. Every time she has attended, she's always looked incredible. From wide-leg Ralph Lauren trousers when she attended with new sister-in-law Kate Middleton to a classic white button-down in 2016 before her Duchess days, she knows how to rock summer chic. Now, with her appearance to support friend Williams, she's shown how to do summer style right yet again.

For her look, Markle wore a classic, white linen blazer paired with a black shirt, Outland jeans, sunnies, and an "A" necklace in honor of her son, Archie. One of Markle's accessories, though, is actually super affordable and still available to shop. The Duchess of Sussex's Wimbledon hat is from Madewell, and according to style website Meghan's Mirror retails for under $60.

Markle-focused style website Meghan's Mirror identified the hat as the Madewell x Biltmore Panama Hat. Currently, the style is available to shop on the brand's website for just $58. However, like almost everything Markle wears, the hat is likely to sell out, and you may want to move quickly if you want this cute summer accessory for your own wardrobe.

Markle choosing affordable pieces isn't exactly new, though. While she doesn't always wear pieces that mere mortals can buy, when she does, they become incredibly popular. Plus, the pieces are typically from brands that are easily accessible for people to shop like J. Crew and even H&M.

In one of her most recent wears (before going on maternity leave), Markle wore a $35 cream, knit H&M dress to visit the Mayhew, an animal shelter that's one of her royal patronages. Considering that Markle would be surrounded by puppies, the affordable but still chic dress made total sense. After all, she was likely to leave covered in dog fur — but she certainly didn't seem to mind.

Back in 2018, in one of her earliest looks after becoming engaged to Prince Harry, Markle chose another affordable option that people seemed to love. In fact, Markle's navy and white J. Crew coat was so popular that it sold out. While the coat did cost $450, compared to other outerwear pieces worn by the Duchess, it was practically a steal.

If you want to cop Markle's style from Wimbledon, you can still snag the Madewell hat she wore for just under $60. However, you may want to move quickly. Given that Markle's $450 J. Crew coat sold out after she wore it, a $58 hat is likely to be gone soon. Head to the Madewell website now, and get your Duchess summer style on.

More like this
Kendall Jenner Wore A $38 Sweater & Sports Bra For A Chic Workout Fit
By Allie Fasanella
Khloe Kardashian & Emma Grede Promise Inclusive Fitting Rooms In New Store
By Allie Fasanella
4 Chic Outfits To Wear With Loafers, According To A Fashion Editor
By Bella Gerard
Cyber Monday Deals 2022: The Best Fashion Sales To Shop
By Dominique Norman
Get Even More From Bustle — Sign Up For The Newsletter