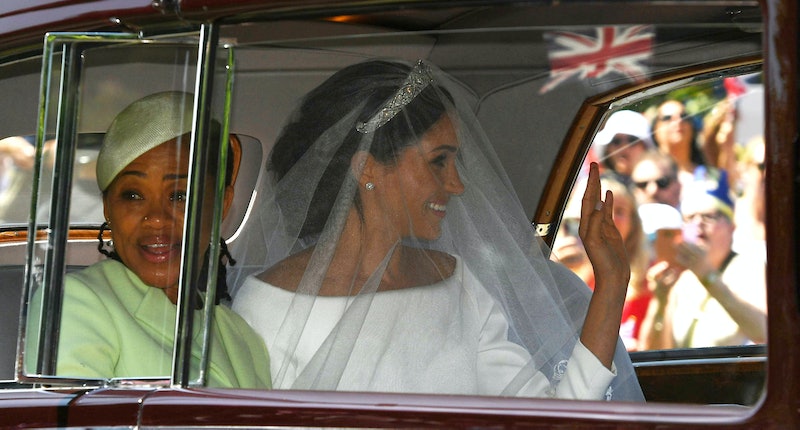 Just about everything in the Duchess of Sussex's life these days seems like a fairy tale — and her fabulous, supportive mom might be part of it pretty soon. Meghan Markle's mom, Doria Ragland, might move to the UK, and act soon, because she might not have room in her luggage for you forever.

UK newspaper The Sunday Express first reported the rumors on August 12. Of course, they're only rumors for now — the tabloid cites an unnamed "source" close to the family — but it sounds legitimate. Markle is Ragland's only child, and the two are known to be close. The source reportedly told the Express that as a result, Ragland is ready to move across the Atlantic to be closer to her. They reportedly said,

"She fell in love with England [at the Royal Wedding] and told me when she got back that it’s somewhere she believes she too could happily live. I think this has been coming for a while."

The alleged insider added that, "Even before the wedding, [Doria] told [people] how she misses her Megs so much, she would do anything to be closer to her." But why now, and why so soon? Potentially because the source believes the Duke and Duchess of Sussex will be "starting a family of [their] own" in the near future. Perhaps! Potentially. Maybe. But oh, how fans would be excited for her.

Glamour magazine pointed out that, in addition to taking any information from unnamed "sources" with a grain of salt, Ragland's expatriation wouldn't really be made official without a "confirmation or announcement from the Palace". There has not been one made by the time of this article. The account Kensington Royal acts as the official social media presence of the royals on Twitter and Instagram, as the members of the royal family are not permitted to use individual accounts.

The Duchess of Sussex's mom does not receive any title or honorary title relating to her daughter's, but that's okay; she's reportedly close to her daughter's in-laws regardless. At the wedding in May 2018, Ragland was chatting and dancing and laughing with the actual Queen of England and Prince Charles — Prince Harry's father — who is next in line for the throne. A Cosmopolitan article elaboratds on the family's closeness, adding that Ragland's relationship to her daughter and daughter's new extended family would help ease the transition of moving to a new country.

One more time, though: This is all just a potential plan. The initial source to the UK paper chose not to reveal their identity, so one can't exactly verify the content of their assessment. That said, it would definitely make sense, considering the bonds between mother and daughter and the continued rumors of the Duke and Duchess of Sussex beginning a family. If it does happen, trust that there will be even more fabulous photos of a radiant mother and daughter in fancy hats, taking carriage rides across the city. Because that will definitely happen every day, right? It's way too fun to just be a wedding thing.