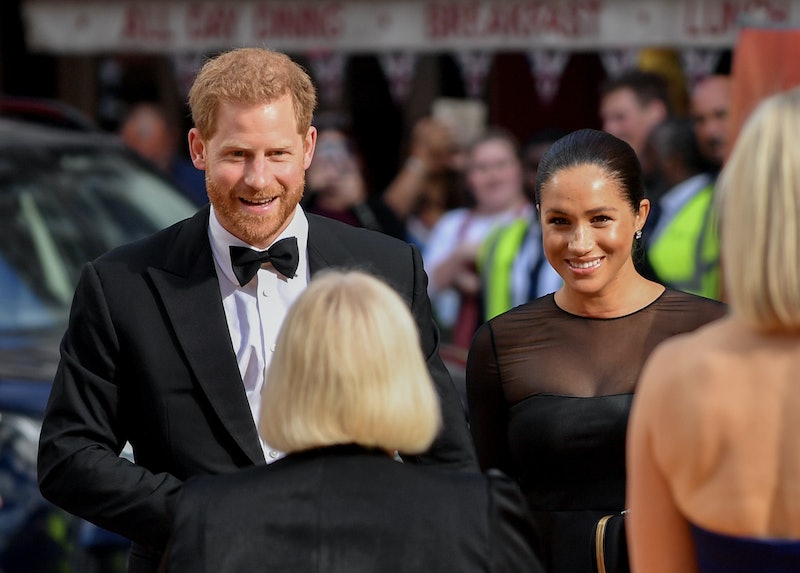 There is a red alert in the fashion world because Meghan Markle and Beyonce are on the same red (um, orange) carpet. No, this is not a drill. And yes, they both looked flawless. Meghan Markle's The Lion King London premiere outfit was super sleek, a la traditional Duchess style. Going for a fierce black look, Markle certainly channeled the classic elegance for which the royals are known.

While Beyonce has been promoting the film and looking flawless doing it, getting a Markle style siting has proved much more rare lately. The Duchess of Sussex just gave birth to she and Prince Harry's son Archie Harrison just a few weeks ago. Obviously, she's still recovering and getting used to becoming a mom. That's made her appearances few and far between. At the London premiere of The Lion King, though, fans of the Duchess finally got to see her again and on a red carpet no less.

For the London premiere of The Lion King, Markle attended with her husband Prince Harry wearing a black tea-length gown. The dress has long sleeves and a modest neck in a sheer fabric, but broke into a tafetta-like material for the bodice and skirt. The look was typically royal in its conservative nature, but also beautifully elegant.

Markle wore her hair in her signature bun, thought it was a bit more refined for the occasion. With simple studs, understated heels, and a black clutch, Markle kept her look classic. And she looked incredible.

The look is totally in line withThe Duchess' usual style, and it was a perfect choice for the event. She and Prince Harry looked incredible as they walked the carpet together in one of their first appearances together since baby Archie was born.

And, yes, the UK royal couple did meet the U.S. royals, Beyonce and Jay-Z, in their night out. There's even photos to prove it.

Markle, who used to be an actress on the television show Suits, hadn't hit an official red carpet in some time. Lately, most of her recent appearances have been centered around her philanthropic work as the Duchess of Sussex or been in support of friends and family and not official engagements.

Most recently, Markle appeared at a polo match with Archie Harrison in two in order to support Prince Harry who was playing. The new mom wasn't there in an official capacity, but she still looked so chic in an oversized green khaki dress and sunnies with her hair in waves.

Prior to Prince Harry's polo match, Markle made a surprise appearance at the Wimbledon tennis tournament. While the Duchess wasn't slated to attend, her friend Serena Williams was playing in a match, and of course, she went to the event to support her.

Since giving birth, one of Markle's only formal appearances has been at the Trooping the Colours. While the Duchess did attend the London Series baseball game between the New York Yankees and Boston Red Sox, it was a markedly more casual event. Her Trooping the Colours appearance had her in full royal form, fascinator and gloves and all.

Now, thanks to The Lion King red carpet premiere in London, fans of Markle's fashion have gotten to see the Duchess in full glam mood for basically the first time since giving birth. Honestly, she didn't disappoint — not that she ever would.