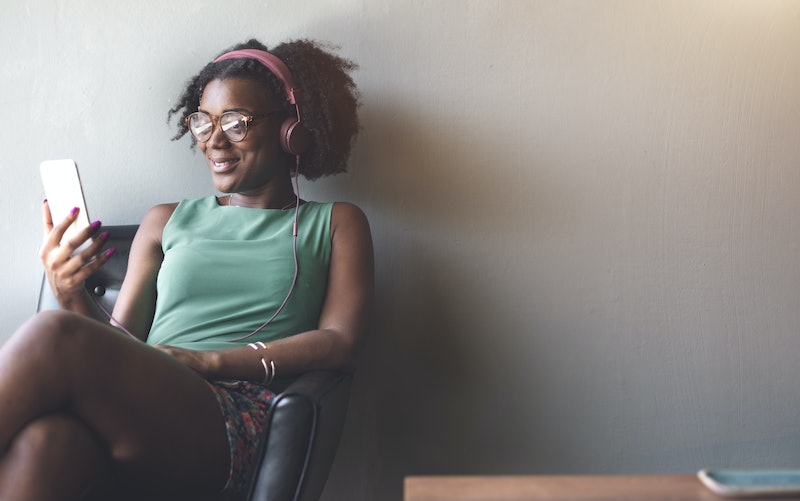 We're kicking off the summer with a whole bunch of planetary retrogrades, and one big one is about to join the brigade: Mercury. Yup, another infamous Mercury retrograde period is comin' through to stir the cosmic pot starting June 17 — but if you've already felt the retrograde drama begin to stir, you're not alone. That's because Mercury's pre-retrograde shadow period (aka its retroshade) actually began on June 2, so over the next two weeks we'll all start to feel the effects of the retrograde settling in.

Mercury retrograde periods are known for their ability to make our day-to-day lives a little more frustrating and a lot less smooth. Running late, missing meetings, misinterpreting what someone's said, losing your keys, or crashing apps on your phone are all typical retrograde-fueled mishaps that everyone's forced to deal with during these tri-annual three-week periods. During a retroshade, we have a chance to slowly adjust to the impending retrograde's effects — and we should take this opportunity to tie up loose ends in any work or personal projects, address outstanding issues in our relationships, and practice slowing down and double-checking our work before making anything final.

While no sign is exempt from the trials and tribulations of any retrograde cycle, there are actually a few zodiac signs who will be least affected by Mercury retroshade this summer and are less likely to run into major issues. Read on to find out if you're one of the lucky ones.

During Mercury retrograde cycles, it's always a good idea to think before we speak, re-confirm plans before leaving the house, and review messages before hitting send — and employing these simple, mindful practices can help ensure a drama-free retroshade for you, Taurus. "Confusion in communication will be your main issue during Mercury’s retrograde shadow," astrologer Leslie Hale of Keen.com tells Bustle. "Be careful to listen to what people are telling you and the way you respond." So long as you put in the extra care to be thoughtful and intentional with your words (and to actually listen when someone's trying to communicate with you), you should be able to circumvent any of the retroshade's major annoyances.

Mercury retroshade is asking you to dive deep into your subconscious and face your inner self over the coming weeks, and that might make you a little less social than you usually are. Embrace this moment of introspection. "During Mercury’s shadow period, you may want to take time out to get plenty of rest and spend more time alone, which is rare," Hale says. This is actually a blessing in disguise — because the less busy your schedule is during this transit, the less likely you are to run into any major retrograde drama. Make sure to prioritize self-care and give yourself time to explore things solo, as this transit could be really transformative and healing for you if you simply allow yourself to think and feel on your own.

Some retrograde cycles feel like an absolute tsunami, but Mercury retroshade will feel more like a series of gentle and awakening waves for you, Scorpio. It may still rock your world a little bit, creating some tension between your lofty desires and your more mundane day-to-day duties — but ultimately this is leading to a period of growth, not drama. "The way you think about the world may start to shift during this time in very subtle but noticeable ways," Hale says. Be willing to float with the retroshade's flow over the coming weeks. You'll find that you're able to sail through it smoothly, so long as you slow down and keep your mind open to new ideas and perspectives.

Over the coming weeks of Mercury's retrograde cycle, your focus is likely to shift onto your own wellness and personal routines, as well as the ways you can be of service to others. So long as you take a little extra time out each day to rest, stay hydrated, and prioritize your mental health, you'll be able to handle the retroshade's annoyances with ease and still have enough energy to be there for the people (and causes) you care about. "If you start to feel off for more than a few days, make sure you take care of yourself," Hale says. "You can’t help others if you aren’t on top of your game." Put your well-being first to ensure you can keep up your momentum.

More like this
February's Full Snow Moon Will Breeze Right By These 3 Zodiac Signs
By Brittany Beringer
These 3 Signs Are The Master Chefs Of The Zodiac
By Kristine Fellizar
These 4 Zodiac Signs Make The Best Bridesmaids
By Nina Kahn
These 3 Zodiac Signs Could Write A Bestselling Novel
By Brittany Beringer
Get Even More From Bustle — Sign Up For The Newsletter
From hair trends to relationship advice, our daily newsletter has everything you need to sound like a person who’s on TikTok, even if you aren’t.