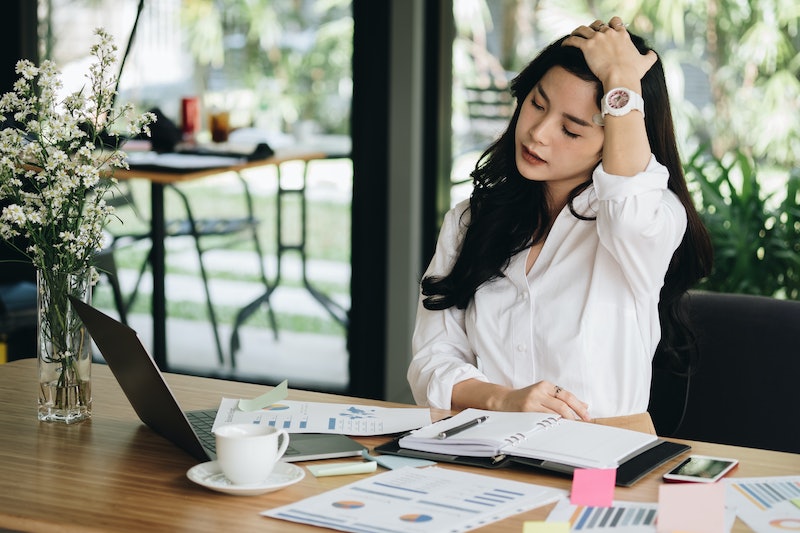 Another day, another drama, and another planetary retrograde to prepare for. Mercury's pre-retrograde shadow period began on June 2, which means we're officially on countdown to Mercury retrograde summer 2020, which kicks off on June 17 (womp womp). Mercury's shadow period, which is also known as its retroshade, is the approximate two-week period that leads up to the retrograde itself. Retroshades tend to be less intense than the actual retrograde periods that they lead up to, but that doesn't mean they don't serve up their own set of cosmic struggles — and there are a few zodiac signs who will be most affected by Mercury retroshade, so you'll want to pay close attention if you're one of them.

During the retroshade, all the things we know about Mercury retrograde begin to take form: the tech glitches, the perpetual traffic jams, the typo-ridden e-mails. You know the drill. These two weeks are a good time to start paring things down when it comes to our social lives and work plans, as having wiggle room in your schedule is a helpful way to offset some of the retrograde's timing-related stressors.

Also important to keep in mind is the fact that Mercury retroshade and retrograde both take place entirely in the watery sign of Cancer this summer, which puts a sentimental and emotional twist on the issues that are likely to surface during these periods. This means that in addition to the retrograde's usual antics, we may also be feeling extra sensitive — so being careful about the way you say things or handle miscommunications is even more important than usual, as people's feelings are more readily at stake.

If you're one of the signs most affected by Mercury retroshade summer 2020, you'll want to take a few extra precautions. Read on to find out.

As a naturally impulsive fire sign, the roadblocks you're starting to hit during this retroshade may feel extra frustrating for you — and the emotional slant that Cancer's energy is adding to the mix is only making you feel more bogged down. "Mercury’s shadow period will be difficult for you, as you don’t like to be slowed down in any way," astrologer Leslie Hale of Keen.com tells Bustle. "Cancer is not usually a great sign for you to begin with, as it is way too emotional for your Mars-ruled temperament." Though you're not in the mood for it, pumping the brakes during this period is a must. Otherwise, you risk crashing and burning, which will only slow you down even more in the end.

"Your planetary ruler is Mercury, so you may be affected more than others by the shadow period of the retrograde," Hale says. "Expect trouble communicating with family members [and others who are close to you]." You've already got Venus retrograding through your sign throughout the duration of Mercury retroshade, so the mixed-up energy is hitting you hard this season, Gem. Focus on getting your affairs in order before the retroshade ends. If you deal with number-crunching matters like finances or budgeting, the retrograde's storm might be a little easier for you to navigate later in the month.

This retroshade might feel particularly stressful for you, Cancer, as Mercury retrograde's cycle is hitting your sign all summer long, and you're feeling extra sensitive to all the miscommunications and broken plans that this transit tends to bring. "You're already emotional, but with Mercury about to retrograde in your sign, it's easy to respond to every conversation as though your emotional life depends on what you say," Hale says. Now's a great time to practice not taking things too personally. We'll all be struggling to think clearly and express ourselves properly throughout the next six weeks, so any mishaps are likely due to the retrograde rather than a personal grudge against you.

You're a busy bee this season, Cap, and that could contribute to why this retroshade (which is hitting the relationship sector of your chart this summer) feels so frustrating. "Slowing down to reassess things is not going to be easy for you, as your [inclination] is to put one foot in front of the other and continue to climb that proverbial mountain," Hale says. "But there is after all, more to life than work." However, the strain on your one-on-one relationships is going to require you to slow things down in the other areas of your life and devote extra energy to talking things through and finally addressing some of the old wounds that are likely to resurface.