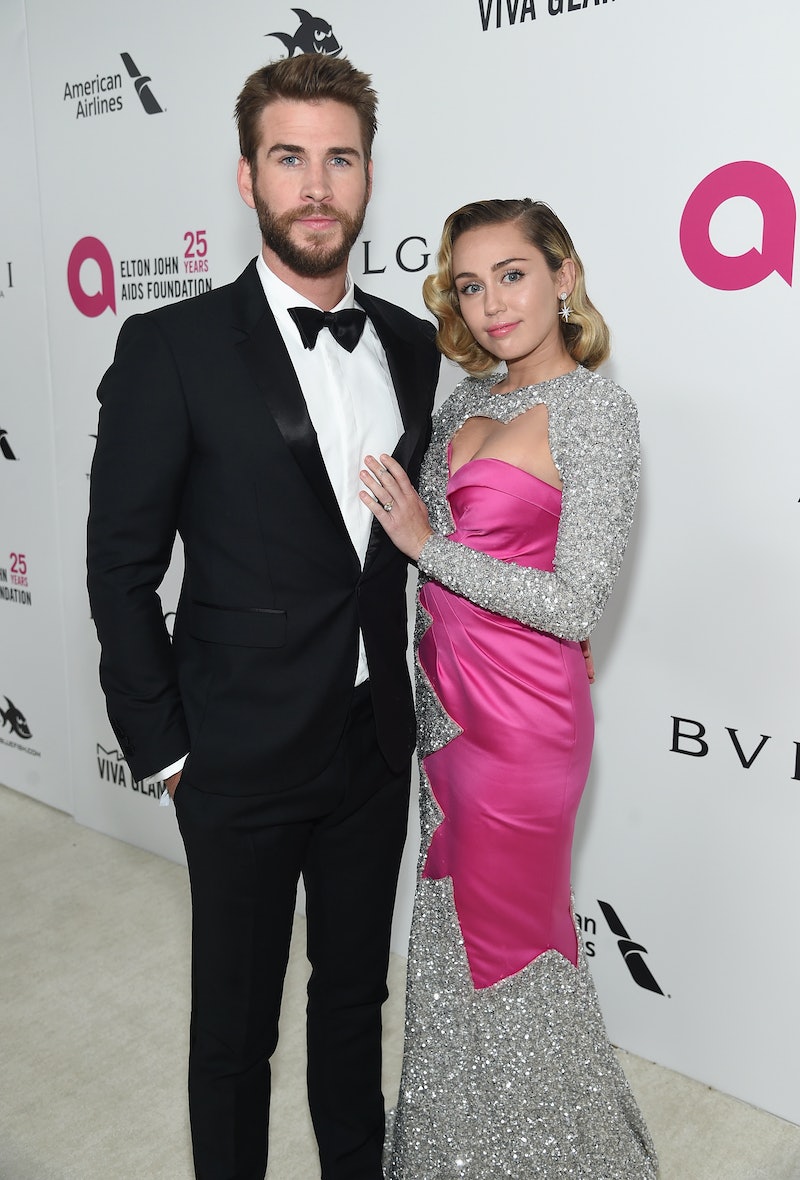 Sometimes a tragedy can impact your life in either a positive or negative way. Well, Miley Cyrus and Liam Hemsworth losing their home in the California wildfires last November changed their relationship — and for the better. In an essay written for Vanity Fair that was published on Feb. 21, Cyrus opened up about personal areas of her life, including her decision to get married to Hemsworth after knowing him for an entire decade. For those unaware, they met on the set of the 2010 film The Last Song, based on Nicholas Sparks' book of the same name.

Cyrus revealed in her essay that the experience of losing one's home can change a person's life greatly, just like it did theirs. So much so, the singer and Hemsworth ultimately decided it was finally time to become husband and wife. They officially said "I do" on Dec. 23, 2018. She wrote for Vanity Fair,

"What Liam and I went through together changed us. I'm not sure without losing Malibu, we would’ve been ready to take this step or ever even gotten married, who can say? But the timing felt right and I go with my heart. No one is promised the next day, or the next, so I try to be 'in the now' as much as possible."

The "Nothing Breaks Like a Heart" musician's reasoning makes complete sense. She described the experience of having to say goodbye to her home in Malibu, "Losing my home, losing that peace, was very unsettling. I didn’t go back. I felt like my roots got ripped from under me."

Nobody is promised tomorrow, so why not follow your heart by marrying the person you truly love most? That's exactly what Cyrus and the Isn't It Romantic actor decided to do. It also solidified the couple's connection even further. Like she shared,

"Liam and I have also found a new bond underneath all that rubble. Going through a natural disaster, the grief you experience is really unlike any other loss. No more, just different. In our position it feels or looks like everything is replaceable and you can start again, but you can’t buy spirit."

In November, the wildfires consumed their home with mainly rubble left behind. Hemsworth shared an Instagram on Nov. 13, 2018 showcasing the house's remnants.

Hemsworth accompanied the photo with a lengthy caption that partially read,

"It’s been a heartbreaking few days. This is what’s left of my house. Love. Many people in Malibu and surrounding areas in California have lost their homes also and my heart goes out to everyone who was affected by these fires. I spent the day in Malibu yesterday and it was amazing to see the community pulling together to help each other out in any way they can. Malibu is a strong community and this event is only going to make it stronger."

Like the generous duo they are, Cyrus and Hemsworth donated $500,000 to wildlife recovery. The "We Can't Stop" artist recognized in her Vanity Fair essay how lucky she and Hemsworth are, despite their entire home being burned to the ground. "To lose 'everything' at that time — materially, because no lives of people I know and love were lost," she wrote.

They've had a relationship filled with ups and downs, but they've always managed to work through the hard times. Cyrus and Hemsworth's strength as both individuals and a couple constantly shines through. They even found a way to turn the loss of their home into something positive — a loving marriage.