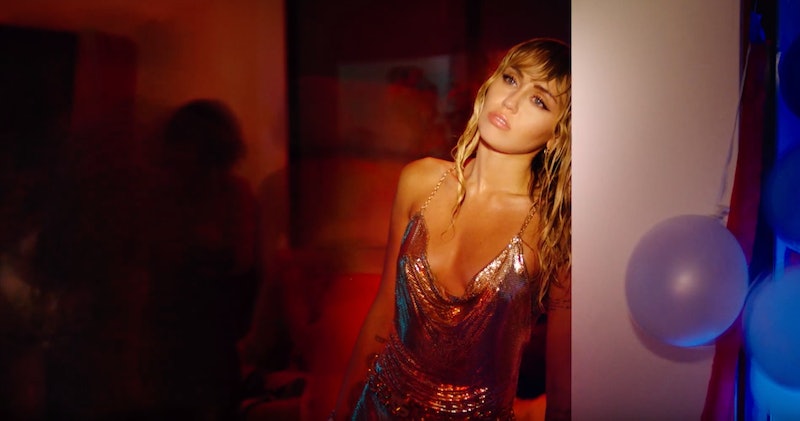 It looks like the party is over, and Miley Cyrus is reevaluating her wild child days. On Friday, September 6, Cyrus dropped the music video for "Slide Away," which finds the singer wandering around in the aftermath of a house party that seems very reminiscent of the antics in her Bangerz-era video for "We Can't Stop." It also includes a reference to her relationship with her now estranged husband Liam Hemsworth that will have fans heartbroken.

After opening with a shot reminiscent of the "whiskey and pills" featured on the single art for "Slide Away," the video cuts between shots of Cyrus at a wild house party and the detritus floating in the pool the morning after. Around a minute and a half into the video, however, a playing card featuring the ten of hearts floats to the bottom, which seems to be a nod to the end of her ten-year relationship with Hemsworth. Eagle-eyed fans might also notice that the card has a hole in the middle of it, which could mean that there was always something missing from the pair's romance, despite rekindling things in 2016 after three years apart.

"You say that everything changed," she sings, mournfully, while the party rages on around her. "You're right, we're grown now." Based on the video, it seems as if the lyrics about not being "who I used to be" are about more than just her recently-ended marriage to Hemsworth. Like with "We Can't Stop," Cyrus' music video is clearly indicating the beginning of a new phase of her life — the party's over, in more ways than one.

Instead of splashing around in the pool with wild abandon, like in that video, Cyrus is floating in the water in "Slide Away," along with plenty of abandoned liquor bottles and a broken disco ball. Whereas things seemed to be all about having the wildest time possible in the past, Cyrus seems bored of the antics in this new clip, isolating herself from the group and seemingly reflecting on her heartbreak.

While the lyrics to "Slide Away" earned plenty of attention when Cyrus first released the song in August, shortly after she and Hemsworth announced their separation, the video makes it clear that the song isn't an attempt to make her ex look bad. "Her song was her way of telling her story without having to say anything at all," a source told People in August about Cyrus's decision to release the song. They added, "She isn’t trying to bash [Hemsworth], but she wants to be able to share what she’s been going through."

The video's shots of Cyrus seemingly bored with the party going on around her — along with blunt lyrics like, "I want my house in the hills / Don't want the whiskey and pills," — seem to coincide with reports that the singer was upset with Hemsworth's reported partying. Though "Slide Away" doesn't feature any explicit references to her divorce, the video appears to be a way for Cyrus to give fans some insight into her current mental state.

While Cyrus has not publicly commented on the split — aside from some cryptic social media posts from her "girls' trip" with Kaitlynn Carter — Hemsworth broke his silence on Aug. 12 with an emotional post on Instagram. "Miley and I have recently separated and I wish her nothing but health and happiness going forward," the Hunger Games star wrote alongside a photo of a sunset. "This is a private matter and I have not made, nor will I be making, any comments to any journalists or media outlets."

"Slide Away" might not be an outright comment on Cyrus and Hemsworth's divorce, but it's clear that the singer will continue to be honest with her fans about where she's at in life, with an assist from her music.