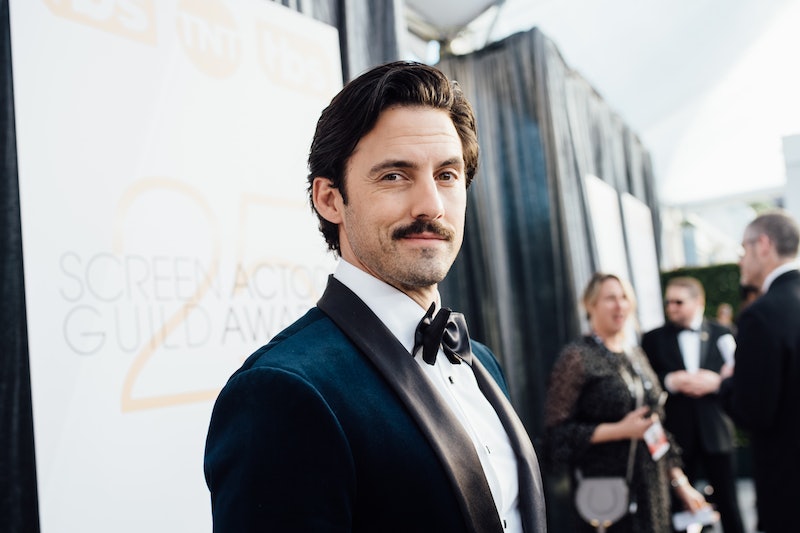 From Jess Mariano to Jack Pearson, the star of This is Us has played a lot of iconic characters — and he almost added a legendary superhero to that list. Milo Ventimiglia was told he was "too old" to play Batman, the actor revealed during a recent appearance on Variety and iHeartRadio's "The Big Picture" podcast.

When the question of giant, superhero blockbuster movies came up, Ventimiglia revealed that he was in contention to take over as Bruce Wayne from Ben Affleck, who stepped down in early 2019. "Do I see myself in a cape and cowl?" he asked, before explaining, "Warner Brothers didn’t. They said, 'Ventimiglia, you’re too old.'" For the record, Ventimiglia is 42 years old; Affleck was 43 when he took over the role, and Christian Bale was 31 when Batman Begins was released in 2005.

In May, Warner Bros. announced that 33-year-old Robert Pattinson would take over as the new Batman in the upcoming solo hero film, The Batman, but Ventimiglia has no hard feelings about losing out on the famous role. "It’s okay. It doesn’t matter," the actor said, adding, "By the way, I’m kind of busy," in reference to his Emmy-nominated role on This is Us.

As for whether Ventimiglia would be interested in stepping into another heroes' tights in the future, the actor revealed that he's happy with the characters he's currently playing. "Maybe I'm just playing real life superheroes right now," Ventimiglia said. "You know, Jack Pearson, Denny Swift [from The Art of Racing in the Rain] — they're real, attainable superheroes that are out there in the open. They're representing good guys and good fathers, and things like that."

Ventimiglia has previously talked about the fact that he tries to use his roles in projects like This is Us as a force for good in society. In March 2017, the actor told Bevy Smith on her SiriusXM radio show, "I try to represent what men could be" with Jack Pearson. "Which is kind, which is giving, which is not a pushover. Don't mistake that."

Speaking about what playing Jack has taught him about what he wants to represent in real life, Ventimiglia said, "Just be a strong man, a good man, contribute to the world instead of taking away from it. I think in that, you're going to attract a good mate. You're going to attract someone who is going to admire you for who you are. Maybe not for just how your nose is placed in relation to your chin."

While he admitted that he's a big fan of the Batman franchise and superhero movies in the Variety interview, Ventimiglia has also shared that he thinks that projects like This is Us play an equally important role in the public consciousness. "Me as an individual, I look at people ... Male, female, black, white, any ethnicity, any sexual preference — we're all people," Ventimiglia told outlets, including Bustle, in March 2017 about why people need a show like This is Us right now.

"Life is hard enough, you know, why look at someone differently just because of the color of their skin or their [sexual] preference or their socio-economic standing, if they have money or they don't have money — it does not matter. We're all deserving of a happy life," he continued.

It may seem ridiculous that Ventimiglia is considered "too old" to play a character like Batman — especially considering he's around the same age as the previous Bruce Wayne — but it seems as if the actor has a good perspective about the whole situation. Besides, he can touch just as many people on a show like This is Us as he can as the Caped Crusader himself.