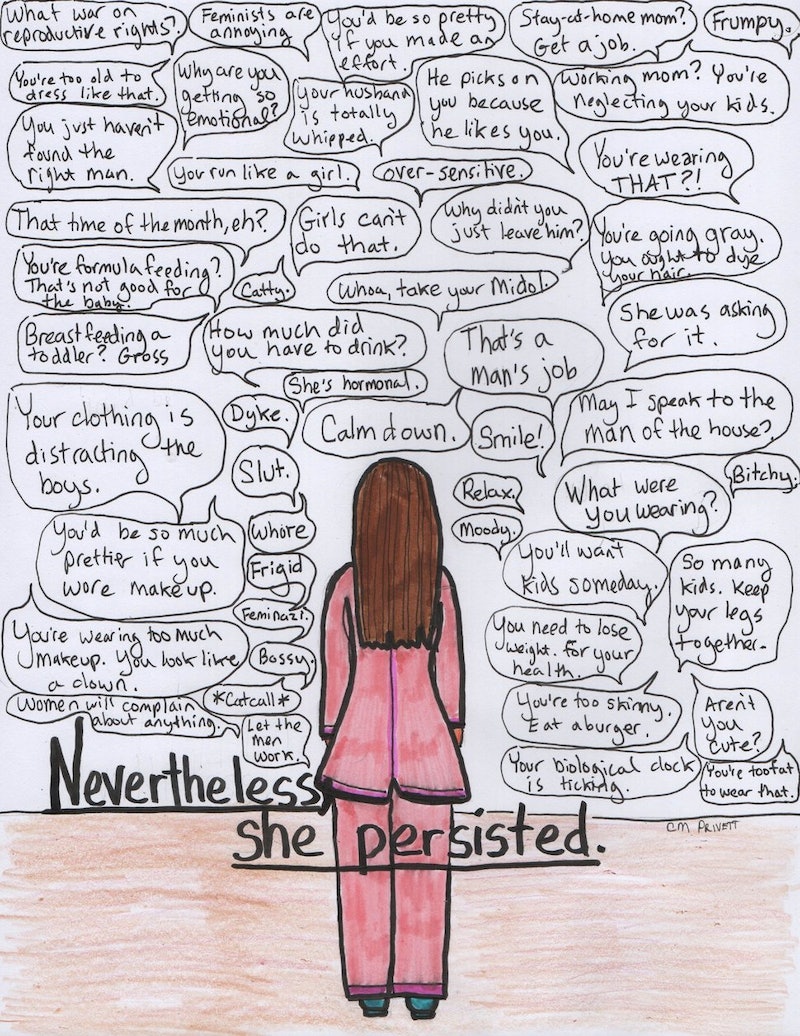 On the morning of Feb. 7, Courtney Privett was making breakfast for her two daughters when she read the news: Senate Majority Leader Mitch McConnell had silenced Sen. Elizabeth Warren during her speech opposing Sen. Jeff Sessions' appointment as attorney general by uttering the phrase, "Nevertheless, she persisted." Hearing those words prompted Privett to sketch out a drawing, which has now gone viral, of a woman's back surrounded by speech bubbles with phrases that women are all too familiar with, ranging from "Girls can't do that" to "Women will complain about anything," Privett tells Bustle.

"[McConnell's words] reminded me of some of the phrases I'd heard over the years," says Privett, a fiction writer and stay-at-home mom based in California. "Each little word or phrase was a gnat at my ear, but put them all together and it's a swarm. I don't want my daughters to hear the things I heard, or get used to microaggressions as an inevitable part of life."

Drawing from her own experiences as well as her friends', Privett used a combination of ink pens, markers, and colored pencils to scribble out more than 50 different speech bubbles hovering over a pink-suited woman whose back is turned. It only took her an hour to finish the drawing. "The words and phrases bombarded me like a hailstorm once I began writing them out," Privett says. "These words fly at us from both men and women, from strangers and from people close to us, and so many of us are guilty of saying them ourselves. I ran out of room on the page, and I decided to leave that as a statement in itself."

Here's what the entire drawing looks like, speech bubbles and all:

Every single phrase featured in the drawing is designed to tell a woman how best to live her life. At the bottom of the page, McConnell's now infamous-words-turned-rallying-cry is written in bold, black letters: Nevertheless, she persisted. Privett said she decided to face the woman in her drawing away from the viewer for two reasons: "Firstly, she is facing the words head-on, and she is standing tall and not backing down. Second, by not showing her face, she simultaneously became both anonymous and everyone," Privett says. "I gave her a hairstyle similar to the one I had when I was interviewing for jobs coming out of college, but I didn't want to give her a skin color or any other identifying characteristics because she is all of us."

Privett's drawing sends a powerful message about what women are capable of despite male interrupters, work discrimination, sexism, misogyny, and all of the other harmful consequences of gender inequality. It reminds us all that women are the only ones who should make choices about their healthcare, their careers, their education, and their personal well-being.

Although she's never taken any art classes, Privett has been drawing ever since she was a child, and she would often doodle during class. Her artwork is often themed around politics (not unlike the "Nevertheless, She Persisted" drawing), mostly addressing environmental and education issues. The day after she posted her first drawing, Privett made a second version titled, "Nevertheless, He Persisted," featuring a man on stage surrounded by similar speech bubbles with sexist phrases that men have to put up with every day. Privett said she wanted to honor her 7-year-old son, who loves jazz dance, and create the same effect as the first piece of artwork.

"I thought it was important to show that insults directed toward men contribute to an overall cultural problem," Privett says. "Men are also teased for having interests or careers that are traditionally considered feminine. Children grow up hearing this and it becomes part of their thought process. I believe this is an important subject to address within the scope of feminism."

For Privett, she hopes her children will be able to avoid sexism as much as possible throughout their lives, as tough as it might be. "Sometimes we feel so alone when we're teased or insulted, but we're not alone. This happens to everyone," she says. "Subtle sexism is ingrained in our society, and it is just as important to recognize that it is happening and work to break the cycle as it is to persist in spite of it. It can be overwhelming at times, but persist and keep moving forward," she says.

See more of Privett's work on her Instagram page.

More like this
Here's How To Support Jewish People Amid Rising Antisemitism
By Hannah Orenstein
10 Organizations To Support On Latinx Women's Equal Pay Day
By Caroline Burke and Mia Mercado
What Does “The Rizz” Mean On TikTok? The Viral Slang Term, Explained
By Alexis Morillo
The 10 Memes That Defined 2022
By Alexis Morillo
Get Even More From Bustle — Sign Up For The Newsletter