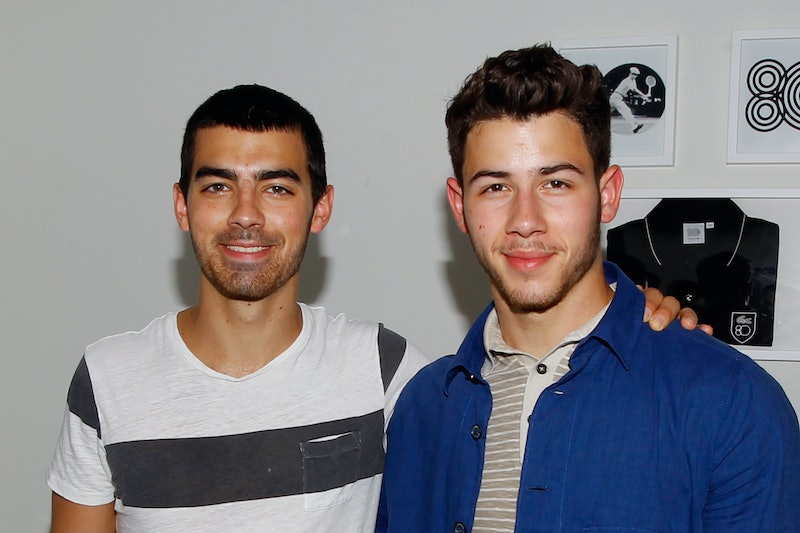 For tweens and teens of the mid-2000s, the Jonas Brothers were everything. Many of those fans are still waiting for the group to get back together, and on Saturday, May 5, Nick and Joe Jonas reunited for a performance of "Lovebug." The two singers (and brothers) appeared onstage together at the SunFest Music Festival in Palm Beach, Florida, and the unexpected performance is certain to make long-time JoBro fans very happy. Joe, who now performs with pop group DNCE, joined his brother on the stage during his solo set. The two broke out into their old Jonas Brothers hit, and in a video filmed by Instagram user Kelsey Mannarino, you can hear the crowd going wild. Audience members shouted along to every word, and there's no doubt that the performance will definitely make fans want the whole group to get back together even more than they did before.

In January, the Jonas Brothers reactivated their Instagram account, sparking speculation that the boy band would reunite. After splitting in 2013, the three brothers embarked on solo careers and maintained individual accounts on the social media platform. Many hoped the reactivation might mean new music or a reunion tour, and Joe and Nick's performance on Saturday could be a good sign. While Nick and Joe have remained more in the public eye, fans are still holding out for Kevin Jonas to come out of retirement and join his musical brothers on stage or for a new release.

It's not the first time the brothers have reunited in some capacity. On January 26, the musicians fueled comeback rumors after appearing together at the John Varvatos Fashion Show in New York, just weeks after reactivating their old Instagram. The brothers enjoyed a night out in matching leather jackets, Joe shared a picture of the evening on social media, captioning it: "The Boys". While the stars didn't perform, their matching attire did resemble their Jonas Brother-era looks. Fans commented on the post, wondering if the evening was just a coincidence and demanding the three brothers reunite onstage.

While both the curious Instagram revival and fashion show outing could suggest the band was getting back together, Nick shut down speculation at the 2018 Grammy Awards. In an interview with E!, he insisted there were no plans for a reunion. "We hung out for a weekend all together, and I guess our Instagram was restarted or reopened, but I can tell you right now there's no reunion planned," he told the network. "But never say never, you never know what’s going to happen.”

Thankfully, Nick did leave the door open for a reunion, but all three members of the Jonas Brothers are pretty busy. Kevin started a family with his wife Danielle, and owns a real estate, development, and construction company. In addition to his entrepreneurial endeavors, he also does occasional television appearances. Nick and Joe have both continued to perform, and they've produced chart-topping pop songs. Nick is expected to drop a new album this year, and he has also pursued television and film roles. He's appeared in shows like Scream Queens and the movie Jumanji.

Joe continues to perform with his successful group DNCE, whose breakout hit "Cake By The Ocean" was one of the biggest songs of 2015. He also recently got engaged to actor Sophie Turner, and the high-profile couple will start planning their wedding after the eighth and final season of Game of Thrones wraps filming.

Given their wild schedules, it's not clear if there will be time to reunite the Jonas Brothers. However, all hope is not lost for those whose middle school lockers were plastered with JoBro pictures, as the reunion on Saturday could be a sign of things to come. It's the first time in a while that members of the Jonas Brothers have brought back their old discography on stage, and even if there isn't a new album or world tour in store, the brothers could revisit their old songs more often.

It's not clear if the Jonas Brothers are getting back together, or if fans will have to wait until the year 3000 to see all three singers performing together again. Who knows — perhaps the brothers will finally reunite professionally at Joe's wedding, or record a song for Nick's new album. In the meantime, this adorable performance of "Lovebug" will have to hold fans over,